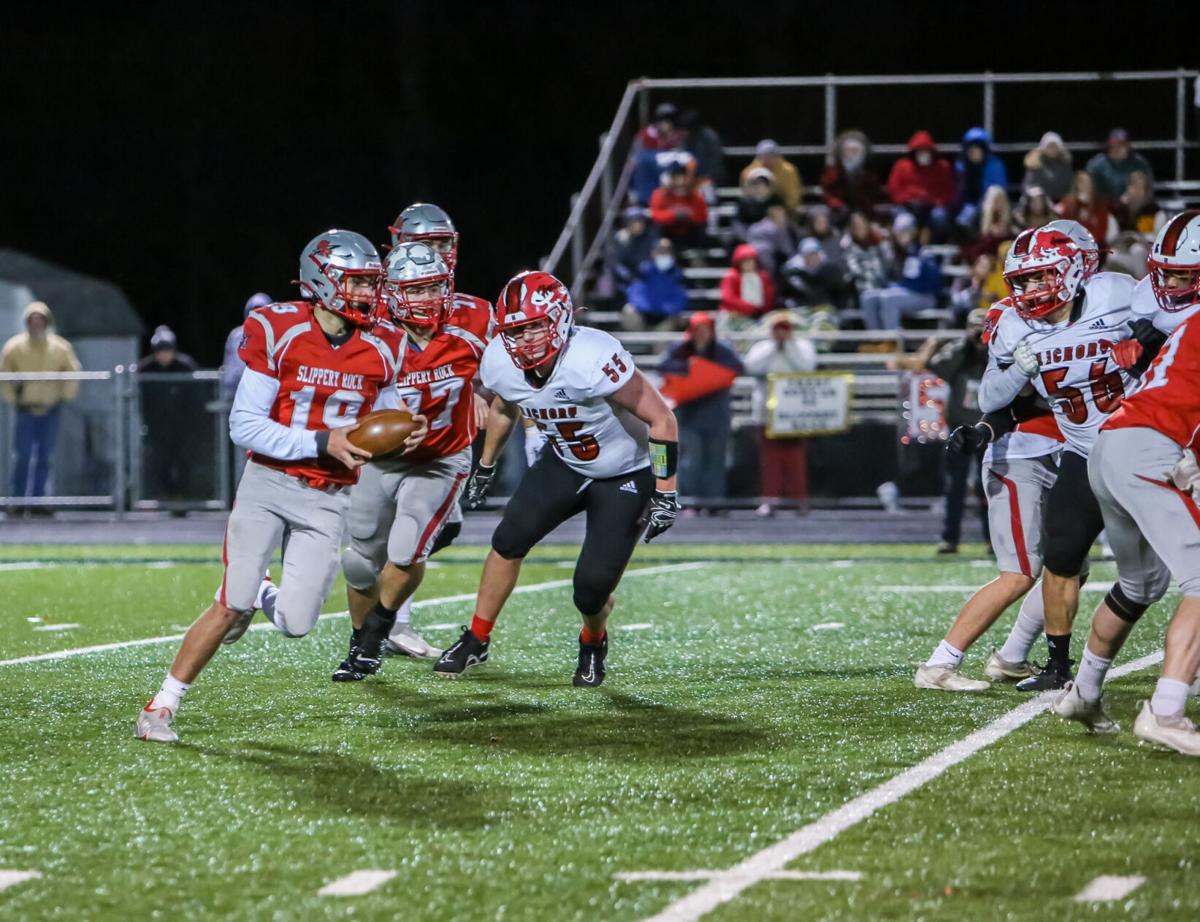 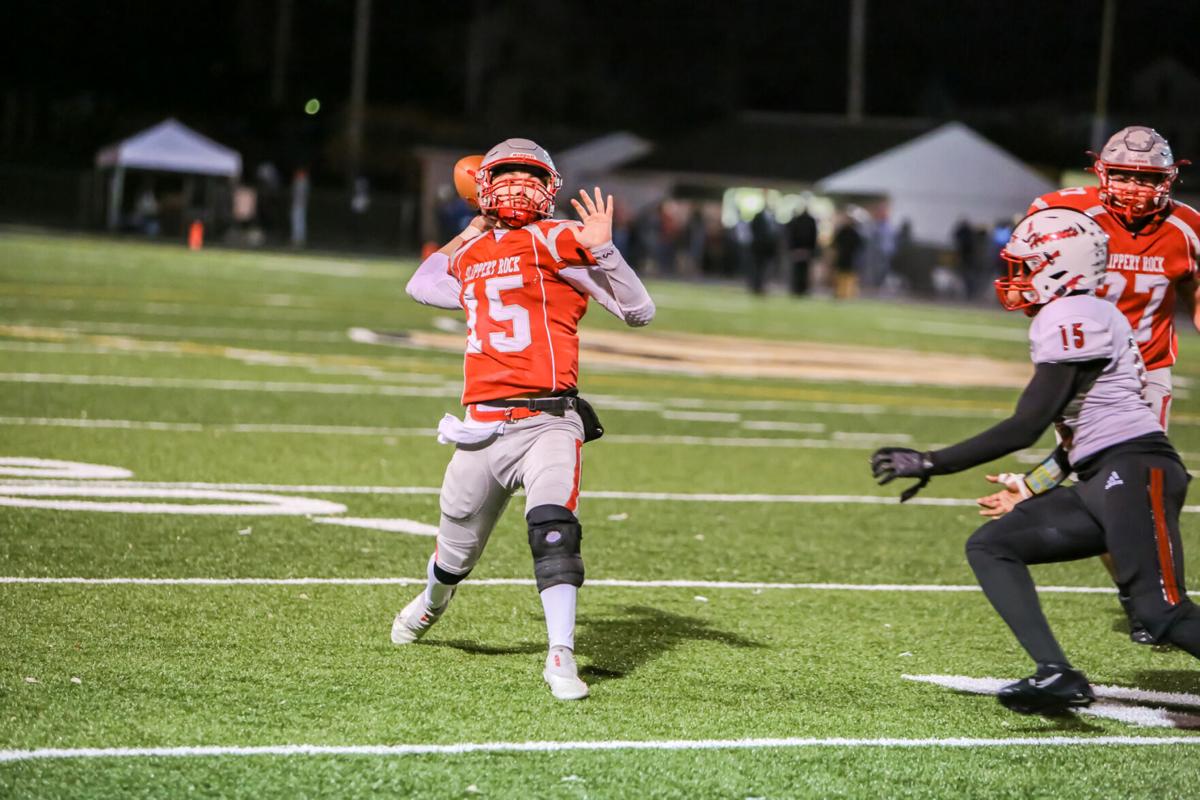 Weeks ago, he thought his high school football career was in the rear-view mirror. But given a second chance, Thompson made the most of it.

By virtue of the victory Slippery Rock (7-1) not only avenged a 27-23 regular-season setback to Hickory, but in so doing the Rockets dethroned the defending D-10 champion Hornets.

At Grove City High’s Forker Field, Slippery Rock Head Coach Larry Wendereusz was struck by the irony. He had learned only moments earlier his Rockets’ rivalry will be renewed against Grove City next weekend for the D-10 championship. Grove City outlasted Fort LeBoeuf (35-21) in Saturday’s other semifinal.

Slippery Rock rolled over Grove City (34-7) in Week 3; ironically, that was the Grovers’ last loss as the Eagles are enjoying a 7-game win skein.

“It is (surreal). It’s nice to get a win on this field. I’m not sure I’ve had one on this field since I got here,” related Wendereusz, now in his 6th season at Slippery Rock. It’s nice to walk off this field with a win, knowin’ we’ve got at least one more week and a chance and a shot at a District 10 title.”

Slippery Rock last played for a D-10 football title 13 years ago – or when Thompson was in kindergarten. But this past Tuesday Thompson was told he was cleared to play following surgery to repair a broken collarbone sustained weeks ago against Grove City.

“I knew I needed to make big plays on special teams and be consistent on offense the whole time,” explained Thompson, a senior. “I followed the guys up front.

“I knew I had to make an opportunity of it, I knew I couldn’t make any mistakes, and I had to go play hard because it may have been my last time playin’ on this field,” added Thompson, who told Wendereusz earlier in the day he had signed his letter-of-intent with Niagara University.

Hickory had just drawn within 16-14 with 9:35 remaining as Logan Woods and Ramarion Whitehead collaborated on a 58-yard TD toss. Though the Hornets’ bid for a potential game-tying 2-point PAT failed, plenty of time remained for a comeback similar to the teams’ regular-season meeting.

In that Oct. 8 game Hickory rallied past the Rockets by tallying 2 TDs in the game’s final 4-plus minutes, including the game-winner with a scant second left on Woods’ TD pass to Jackson Pryts.

“When you put him on a football field he’s awful dang special,” admiring Slippery Rock mentor Wendereusz said in praise of Thompson.

“We knew we had to make a play, and they gave me another chance to take it back and I didn’t miss it,” Thompson simply explained.

“I was teasing (Thompson and his classmate, Andrew Massella, who pilfered Woods’ 2nd-down pass from Slippery Rock’s 38-yard line with 58 seconds remaining) at the end of the game,’ Wendereusz related. and I said, ‘Look, I don’t know who’s gonna get the play of the game – Shane, I don’t know if it’s gonna be your kickoff return, or Bubba it’s gonna be your pick at the end of the game to seal the dang thing. I don’t care who gets it,’ but I’m happy as all get-out that they both happened (Saturday) night.”

On the 2nd half’s 1st play from scrimmage Thompson tore a 77-yard run to Hickory’s 2-yard line, stopped from scoring only by Pryts’ remarkable play as he closed the gap and prevented the TD with a tackle from behind. However on 2nd-and-goal from Hickory’s 5, Mokel momentarily mishandled the snap, but had the presence of mind to recover and scramble to his left for the score. Kingerski’s PAT proved the Rockets with a 16-0 lead just 53 ticks into the 2nd half.

Kennedy collected a game-high 90 yards rushing on 20 carries for Hickory, helping the Hornets to a 204-163 edge in rushing.

Hickory’s 1-score deficit (16-8) was short-lived, though, as Thompson tallied his kick-return.

With 6:01 left Jones culminated a 9-play Hickory drive with a 22-yard field goal; however Hickory’s last possession ended with its 3rd turnover.

“The fumbles, we can’t have, especially with both of ‘em in plus-territory,” lamented Hickory coach Bill Dungee. “On the one when we give them the ball and they kick a field goal, and the other one we were in plus territory on the opening drive of the game. We harped on that all week – the fumbles.

“It’s just tough,” Dungee admitted. “You’ve gotta make plays. We had an opportunity. You can’t ask for more: The ball in your hands, a one-score game, you can go down and win the game. We just didn’t make the play.”

Wendereusz said in praise of Hickory, “They’re the D-10 champs, they’re the ‘king.’ They were the ‘king’ coming into this year that had to be knocked off, and our kids knew that and talked about that in our locker room, that if you want to get to that step, you’ve gotta beat the ‘king.’ and that’s the ‘king.’ and havin’ the opportunity to play for a D-10 title – you don’t get that every day.”

Asked if this is his biggest win since assuming Slippery Rock’s rein, Wendereusz hesitated, then replied,

“Yeah, this is the biggest one, getting us to the D-10 title game is important. But as I told the kids, I’m not excited about gettin’ there, getting there is just getting there. But if you’re gonna get there, then go after it, and let’s get the thing ... “

NOTES: Of Thompson, Wendereusz praised, “He’s amazing! First of all, he’s a great young man. One of the things we’ve preached all year is, we’re gonna be better on the field, in the classroom and in the community. and I think when you take a picture of Shane, he represents that. ... Hickory seniors included Whitehead (game-high 6 catches for 139 yards), Pryts, Sammy Mancino, Joey Fazzone, Nick Maule, Donavon White, Collin Richards, Hunter Durham, Jordan Fors, Konnor McCall and Anthony Legg.