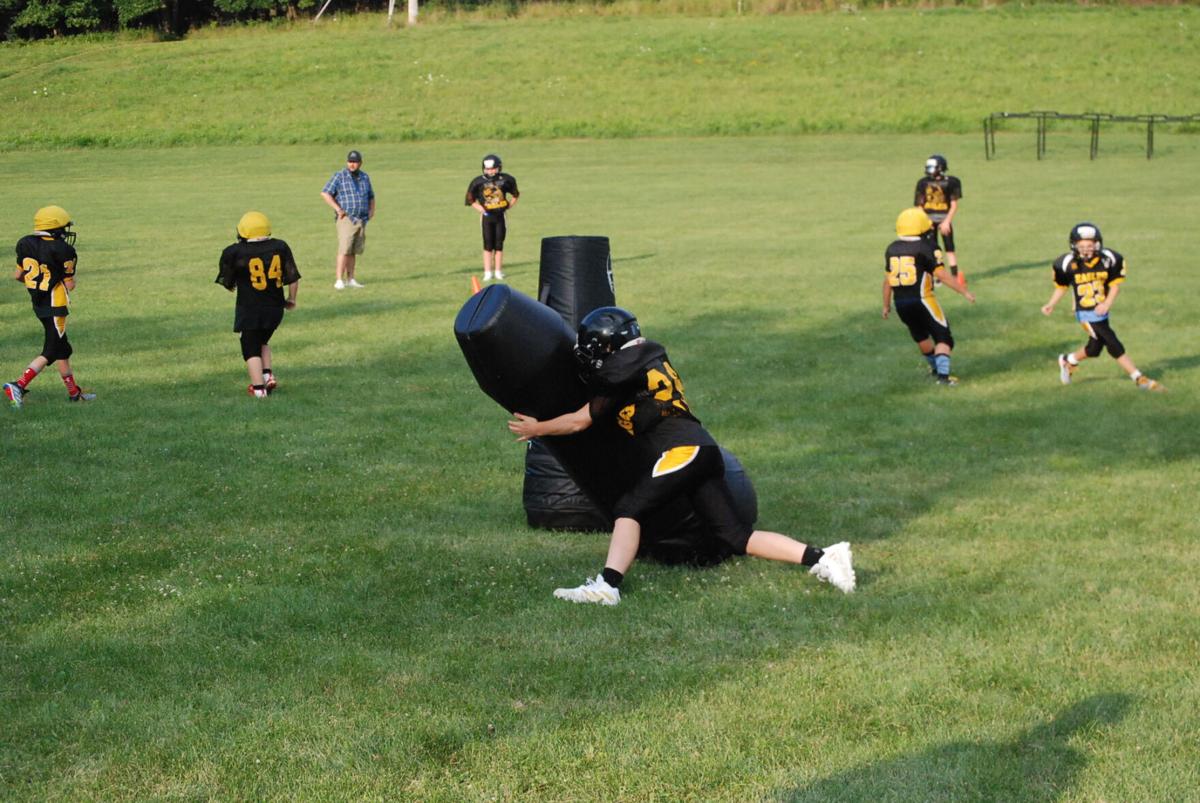 A Grove City Little Eagles player tackles the MVP Tackling Dummy the GCLE purchased this spring. The Little Eagles are one of the only youth football organizations in the United States using the MVP. 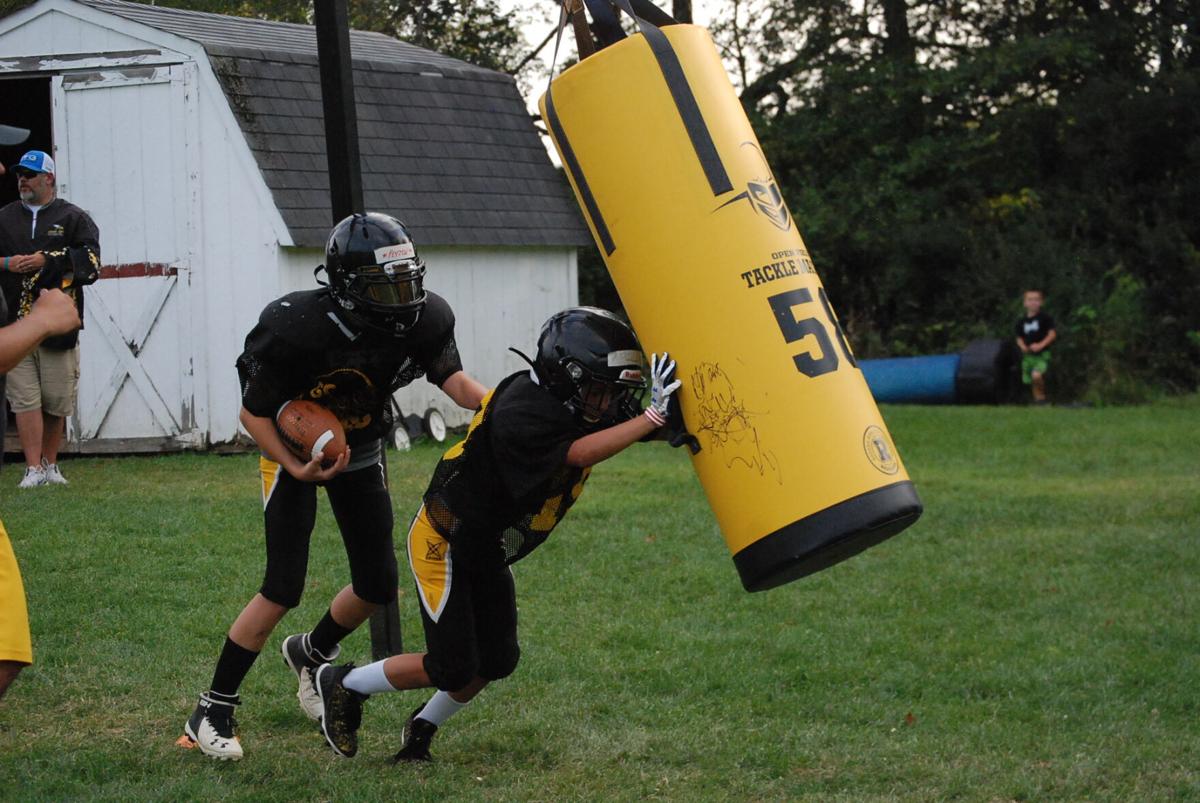 Grove City Little Eagles players work on a blocking drill with a new blocking dummy purchased by the organization this spring.

A Grove City Little Eagles player tackles the MVP Tackling Dummy the GCLE purchased this spring. The Little Eagles are one of the only youth football organizations in the United States using the MVP.

Grove City Little Eagles players work on a blocking drill with a new blocking dummy purchased by the organization this spring.

GROVE CITY – When the Grove City Little Eagles’ players returned to practice nearly 2 weeks ago they had a bunch of new toys of waiting for them.

After not competing in the 2020 season due to COVID-19 concerns, the GCLE Board of Directors purchased multiple pieces of equipment and unveiled them during a series of online reveals.

“Having to cancel last year was kind of a down point and we wanted to re-energize the kids and let them know that we’re still working behind the scenes for the upcoming season,” said Rick Graham, who serves on the board of directors and is a Bantam team assistant coach. “We unveiled them every other week. We started with a small item, then we did a large item, then a small item until we did the final reveal. Some of the stuff we revealed together.

“The new equipment also allows us to actually run full practices and be able to clean the equipment quickly without disrupting practice,” he added.

The new equipment is part of a 3-year plan the GCLE board of directors implemented during the lost 2020 season, Graham said.

“While the board was evaluating the program, we decided to create a three-year road map we wanted the program to go in and focus on safety,” he said. “The first year would focus on the up-keep of old equipment and (purchasing) new equipment. In the following years, we will be focusing on upgrades to helmets and possibly more equipment.

“We heard the concerns of parents and the dangers of their kids playing football. We wanted to make sure we had all of the equipment to make it as safe as possible for the kids.”

Perhaps, the biggest purchase was a motorized MVP tackling dummy that is remotely controlled and can change speeds and directions on a dime. The MVP tackling dummy is used by over 15 NFL organizations – including the Pittsburgh Steelers and Tampa Bay Buccaneers – 50 collegiate and 80 high school programs nationwide, but the Little Eagles are one of the lone youth organizations with one.

The MVP came with an attachment simulating arms, so players can practice punching the ball out of their opponents’ grasp without putting a teammate in harm’s way.

“We’re the only Peewee organization to purchase the MVP,” Graham said. “It can go up to 17 miles-per-hour, which allows us to cater to the faster kids and the slower kids.

“Before (MVP and the attachable arms), they would put a football on top of a dummy and the kids would have to try to force a fumble that way. We were looking for new ways to revamp that and make it more realistic.”

The Little Eagles now have at their disposal a padded dummy attached to a steel structure that can be used to teach proper tackling techniques as well as allow offensive linemen to drive through their blocks to the next level.

Also new in 2021 are refurbished 3-person blocking and tackling sleds. The blocking sled received new life thanks to the efforts of Grove City resident AJ Shreffler and members of the George Junior Republic painting and welding classes.

“Those are for the offensive linemen,” said Graham, who noted the organization also purchased three different target nets for the quarterbacks to practice throws. “It allows them to explode out of their three-point stance and gives them something heavy to push.

“(In 2020), we took a look at them and they had massive holes in the bottom. With AJ and the George Junior classes’ help, we were able to completely refurbish them. That was a huge cost-saver for the organization.”

The GCLE board didn’t forget about its newest players, purchasing a heavy- duty vinyl football line-up marker, which teaches players where to line up as well as shows them each of the numbered holes.

“After the second or third week of practice, we’re going to remove it to see if that worked.”

Whether it’s the new equipment or players simply missed football, Graham said they have been coming to practice early and staying late on an almost daily basis.

“The one thing I’ve noticed is kids are showing up an hour early for practice and are staying an hour later,” he said. “They’re not actually practicing, but they’re wanting to use the equipment after we’re done practicing for the day.

“The parents are taking pictures during practice. It definitely seems like everyone is energized about it. That’s why we did what we did .... to get the kids and their parents excited. We wanted them to really enjoy their experience,” he noted.

The Little Eagles completed a “Bring a Friend” event last week – which resulted in 8 new players joining the organization. Interested players can still register and play for the 2021 GCLE for free until Aug. 20.

The football teams and cheerleaders practice most evenings, 6-8 p.m. at their Greenwood Drive practice field. Anyone interested in registering their child can send a direct message to the board of directors through the Grove City Little Eagles’ Facebook page.

“A lot of the kids brought a friend and most of them that came got signed up,” Graham said. “That’s a good sign. We’re letting any ‘stragglers; – or anyone who doesn’t know about the Little Eagles – still sign up for this year. ... As a way to give back to the community we decided to make it free for anybody that signs up.”

Regardless of all the new equipment, Graham and the rest of the board of directors and coaches are excited to have their players and cheerleaders back in the fold.

“Last year was a tough year, because we had to cancel the season,” Graham said. “That was such a tough decision. We felt it was what was best for the organization.

“It’s so nice to have the kids back, to hear them laughing and playing with the new equipment.”