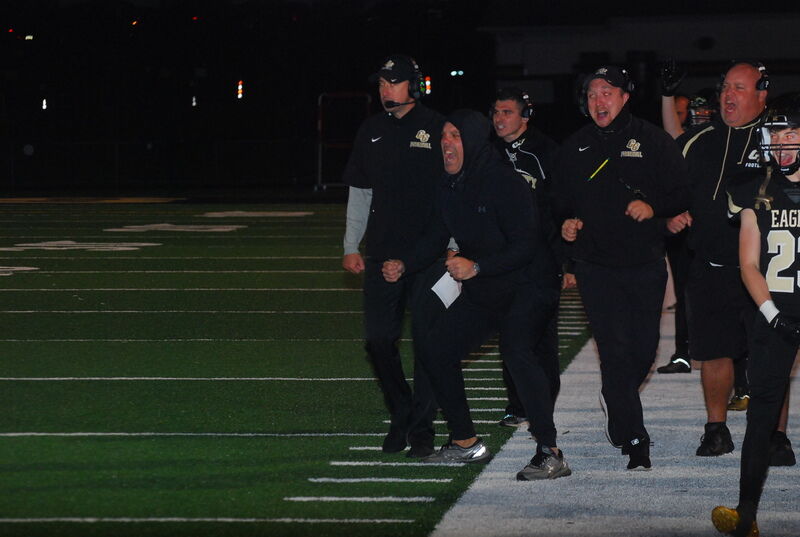 COREY CORBIN | For the Allied NewsThe Grove City bench reacts to a touchdown Friday in the Eagles' game against Slippery Rock. 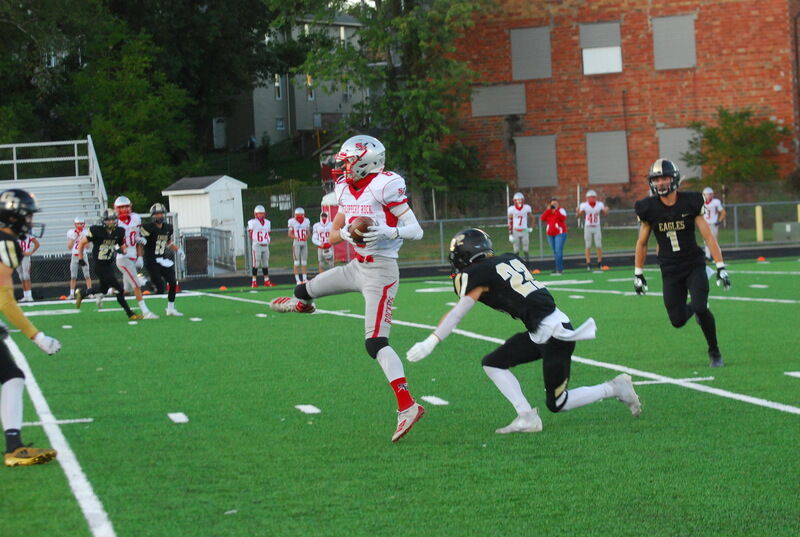 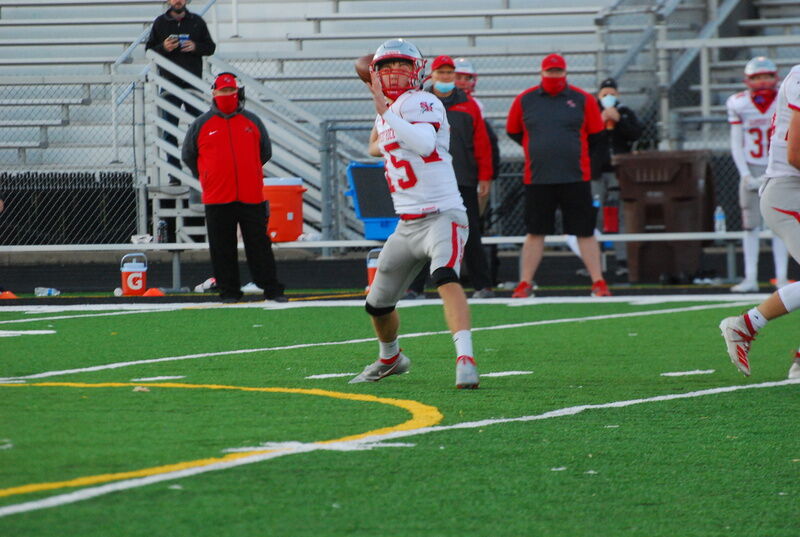 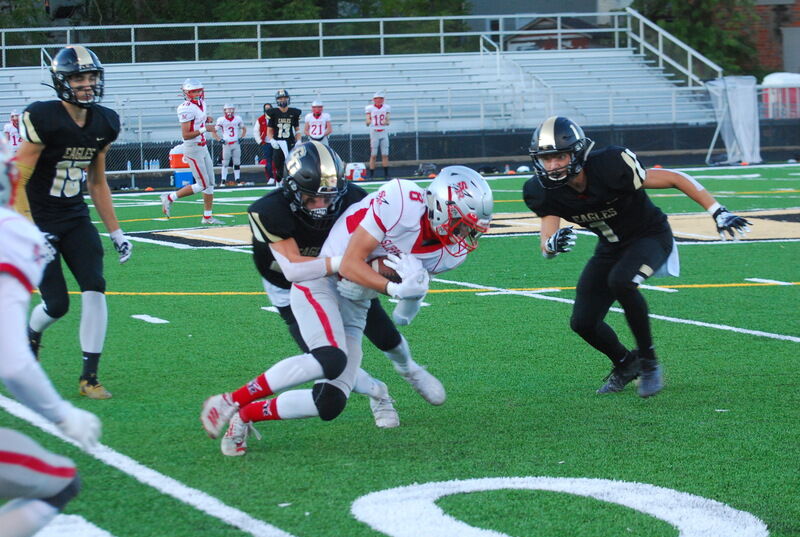 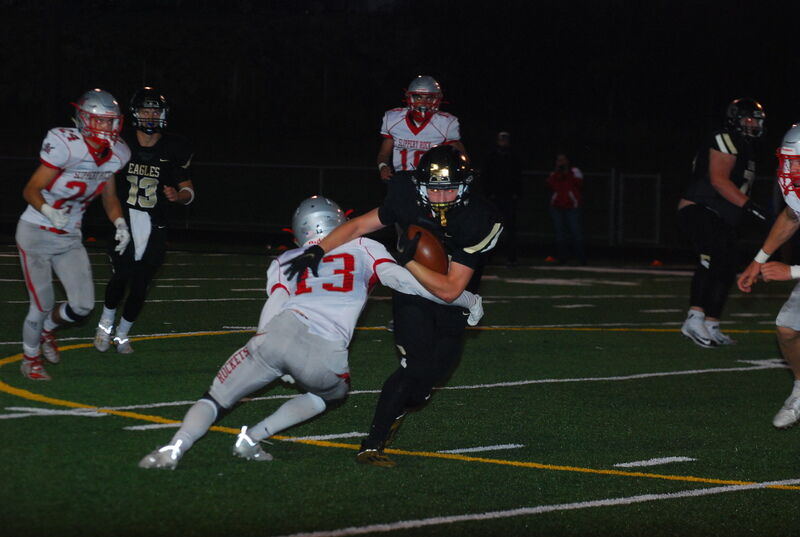 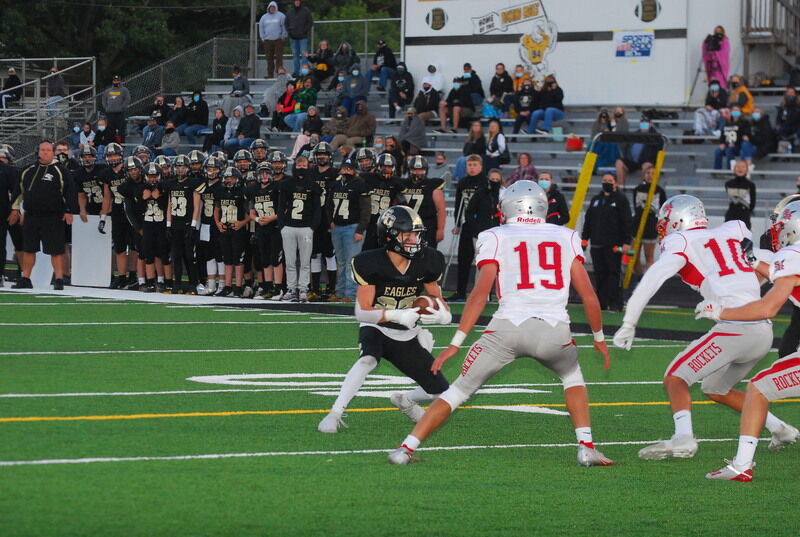 COREY CORBIN | For the Allied NewsGrove City's Gavin Lutz looks for running room Friday as Shane Thompson and Ethan Plesakov close in for Slippery Rock. Lutz slipped free for a touchdown on the play. 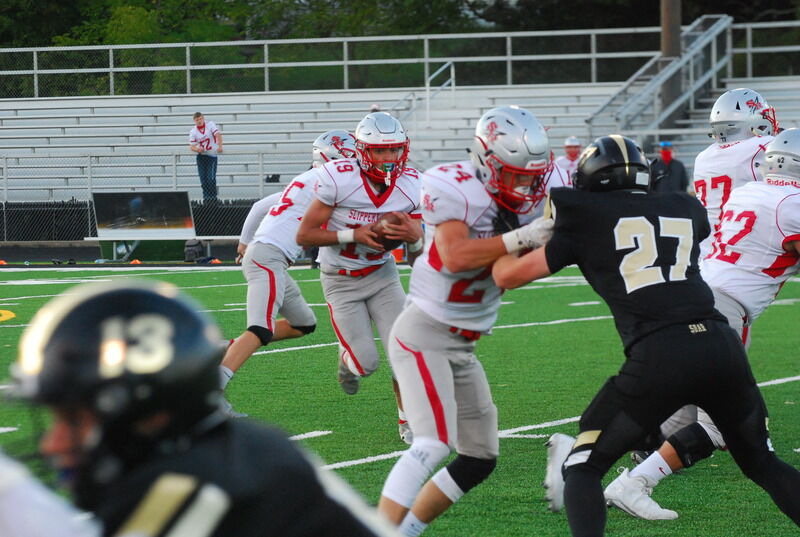 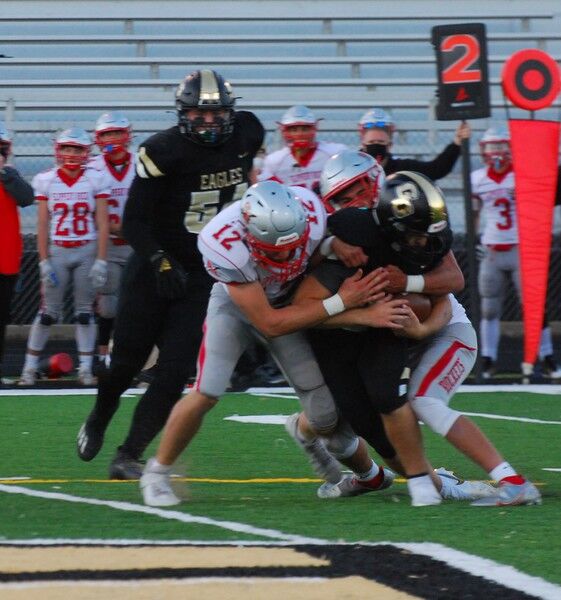 COREY CORBIN | For the Allied NewsThe Grove City bench reacts to a touchdown Friday in the Eagles' game against Slippery Rock.

COREY CORBIN | For the Allied NewsGrove City's Gavin Lutz looks for running room Friday as Shane Thompson and Ethan Plesakov close in for Slippery Rock. Lutz slipped free for a touchdown on the play.

Playing at its typical up-tempo fashion, the Eagles completed 17-, 8-, 8- and 13-play scoring drives in less than four minutes each to open its home schedule with a 34-21 win over Route 173 rival Slippery Rock Friday at Forker Field.

"We didn't prepare for that and that's 100 percent on me for not having our guys prepared for that."

With the teams locked in a 14-all halftime stalemate, Grove City (1-1, 1-1) did most its damage over the final two quarters, compiling 324 of its 479 yards of total offense and outscoring the Rockets 21-7.

"The kids like playing this way," Grove City coach Sam Mowrey said. "If we're not playing this way, it kind of throws us out of rhythm. They enjoy running up the line of scrimmage and running the plays. They can feed off of that momentum and keep things rolling. One of the things we wanted to focus on this week was getting up to the line and running our plays quicker than we did last week.

"We were able to wear them down over four quarters. We're not very deep either, but the kids really worked hard this summer and are in great shape."

"We knew our offensive line was likely going to be the difference in this game," Mowrey said. "Because of some of the injuries we have, we had to shuffle guys around and the boys did a great job and grinding it out. Coach (Todd) Warner does a great job with them.

"Winning up front was huge. Your goal coming out is to establish the run and if you can do that, other things open up. We were able to do that tonight, but that was not easy. Slippery Rock's defensive front and linebackers come up and do a really nice job."

During that span, the Eagles' two-headed running back monster — junior Curtis Hovis and sophomore Anthony Nemec — feasted against the Slippery Rock defense. The GC duo both reached the 100-yard mark for the first time in their young careers, finishing with a combined 280 yards and three touchdowns on the ground.

"They knew they didn't run to their full potential last week and they turned it up this week," senior Zack Martin said. "They were running hard in practice and really turned it on in the game tonight. You could see Curt getting himself pumped up to run and just putting his head down and going. Nemec, being a young guy, stepped up and played like nobody's business."

Grove City was just as lethal through the air with senior quarterback Logan Breese completing his final 10 passes — all in the second half — to finish with 17-of-22 for 217 yards and scoring strikes to freshman Gavin Lutz (17 yards) and junior Anthony Pereira (27 yards).

"Logan made some good decisions, getting the ball out to the guys on the edge and they were able to make some critical plays," Mowrey said. "Between Pereira, Lutz, (Hayden) McCreadie, (Zack) Rodgers, we had some guys step up for us and do a great job."

Slippery Rock started the game on fire, mixing the run and the pass to near perfection and marching 67 yards in 11 plays before scoring on a Shane Thompson 8-yard scamper.

After Nemec's score on the ensuing GC drive, William 'Zip' Mokel capped a 12-play, 68-yard drive by making the most of a broken play on a 1-yard run for the Rockets. Mokel hooked up with senior receiver Ethan Plesakov from 8 yards out early in the fourth quarter for the final Slippery Rock touchdown to cut the deficit to 28-21.

"We need to make sure we're getting a good push up front and running the football as effectively as we need to," Wendereusz said. "We want to do (mix up the run and the pass), but like I told the guys, we left points on the board. We had opportunities to make plays and we just didn't do it. We just weren't as crisp as we needed to be."

On the night, the Rockets finished with 319 yards of total offense (106 rushing, 213 passing) and 23 first downs. Slippery Rock was nearly flawless on third downs, converting 11-of-16 over the course of the game.

"I think we can do some good things with the athletes we have," Wendereusz said. "We have to do better up front moving people off the line of scrimmage. We'll get there. There's no doubt we will. We have to keep plugging away.

"We have young kids out there trying to make plays and we have to do a better job of putting them in position to do that. We were OK (on third downs). I don't know what the final stats read, but we weren't terrible. We just didn't make the plays we needed to do to win the game."

Martin — who pulled in a key pass to convert a short fourth-and-two to set up Hovis' fourth-quarter touchdown — was everywhere defensively for the Eagles, finishing with 18 total tackles (10 solo, 8 assisted).

On his huge fourth-down conversion, Martin added, "We have that play in our playbook constantly and I told Coach Mowrey to run it, because it's wide open and it was there. We hit it and got that first down."

After the game, Mowrey was singing Martin's praises as well.

"I don't even know where to begin," the Eagles coach said. "He's just a great kid. He's the type of kid you coach for ... just to watch them develop and mature from their freshman to senior years. Besides what he did out there on the field, I just checked his report card today and he has 100 percent in every class. He's just a great kid and a great leader. The kids really rally around him."

NOTES: The win was the Eagles' sixth straight in the series and 13th in the past 16 meetings ... The game featured 146 plays, 55 points, 797 yards of total offense and 50 first downs ... Trey Reznor had an interception and Lutz finished with 9 total tackles (4 solo, 5 assisted) for Grove City ... Lutz led the Eagles pass catchers with 6 receptions for 74 yards and Pereira pulled in 5 catches for a team-high 88 yards ... For Slippery Rock, Plesakov had 9 receptions for 99 yards, while John Sabo finished with 4 catches for 49 yards ... Thompson contributed 16 carries for 53 yards and 3 catches for 26 yards ... Two weeks into the abbreviated 2020 season, Hickory, Slippery Rock's opponent Friday, is Region 3's only unbeaten team, Slippery Rock and Grove City are 1-1, and Sharon, which the Eagles play Friday, is 0-2 ... After this week, the schedule moves into the second half of a home-and-home format.