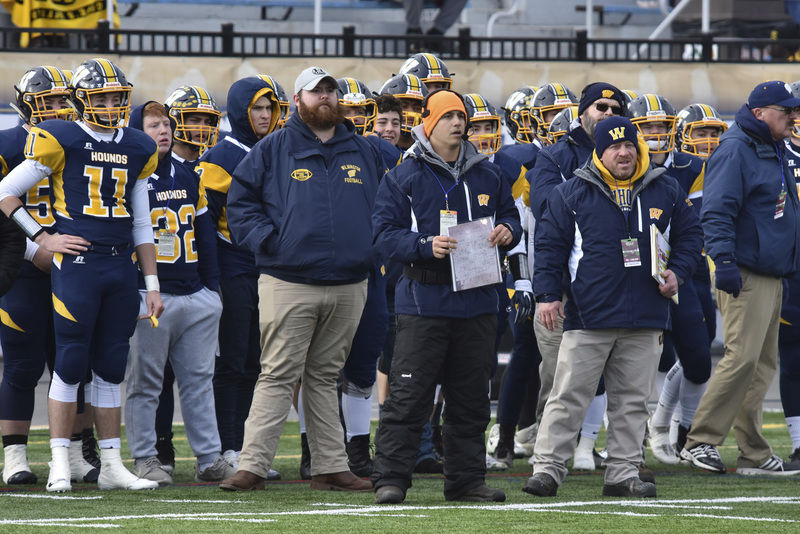 Herald file photoWilmington’s Brandon Phillian is pictured during the 2018 PIAA Class 2A championship game in Hershey. 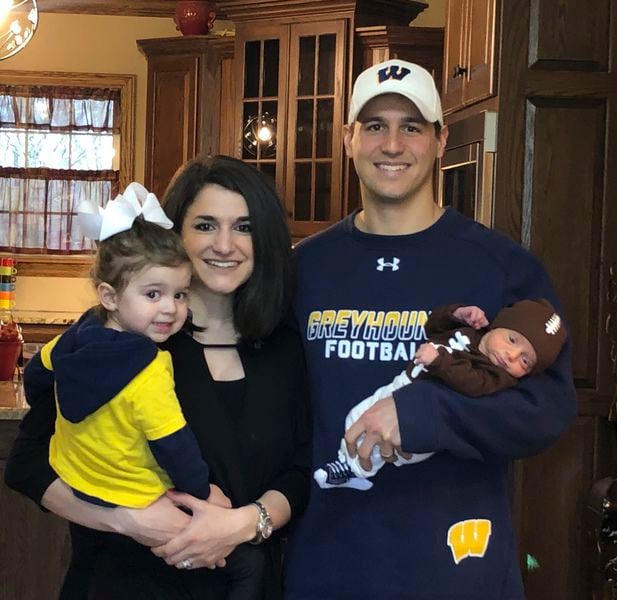 Herald file photoWilmington’s Brandon Phillian is pictured during the 2018 PIAA Class 2A championship game in Hershey.

NEW WILMINGTON -- In the midst of the COVID-19 crisis everyone has had to downsize their lives. But sometimes, a simplistic lifestyle is best.

The Wilmington High Greyhounds’ grid mentor, like everyone else, is attempting to navigate pandemic-posed problems. But perspective is one of his strengths, so Phillian feels blessed to have become a father for the second time, making the most of home-bound family fun.

“You know, there’s never a good time to be quarantined in the middle of a pandemic; however, if this had to happen I think the timing was fortuitous for myself and my family,” the 33-year-old Phillian recently related. “Being quarantined after having a brand new baby is probably as good a time as any. And I know that (wife) Chelsea and I have certainly enjoyed this time with both of our children. And it’s allowed us to really connect with our new baby, Beckett, and it’s allowed (big sister) Braelyn to be a part of that with the four of us. So it’s been a really special time for us at home.”

To be sure, Phillian has not fallen to focusing exclusively on his world; his self-awareness enables him to feel compassion for people plagued by the pandemic.

“I know whenever I say my prayers at night I pray for that those suffering from the coronavirus, that they would be healed; I pray for the families that have lost loved ones to the coronavirus, and I pray for the doctors, the nurses, the EMTs, the first-responders, the police officers, all the men and women who are on the front lines of this disease,” Phillian related. “I hope that we’re able to get it calmed down sooner rather than later ... “

Two years ago, in his 1st season at the Hounds’ helm, Wilmington went to the PIAA Class 2A championship game, losing to perennial power Southern Columbia. Last season, only an upset loss to Avonworth prevented a return to the statewide stage for Phllian (25-3) and followers of one of the area’s most proud programs.

Now, as with his collective coaching counterparts, Phillian is forced to creatively conduct classes and offseason football workouts on-line.

Reflecting back approximately 5 weeks, Phillian related, “Whenever the news came down, things were suspended temporarily -- and I think I speak for many -- I was certainly holding out hope for the winter championships to continue and for the spring sports season to take place.

“Really, my heart breaks for the teams, the players, the coaches who were still in the middle of the winter championship season, particularly the seniors on those teams. Similarly, my heart goes out to the spring sports teams -- players, coaches, and again, particularly the seniors. Those are memories that those student-athletes worked for and invested a great deal of time. So for those memories not to be realized is certainly a sad thing,” Phillian said, continuing,

“For our football program we thought our student-athletes would go into the spring sports season and do what they were being directed to do by their baseball coach (or) their track and field coaches, and we’ve got a high percentage of athletes who participate in spring sports; we really encourage our football players to go out for a spring sport ... and a lot of our guys do that.

“I think what’s made this difficult,” Phillian admitted, “is there are no experts on this subject matter, because it’s unprecedented. If I want to learn something about a running technique I can get on-line and look and see what experts say and learn from those experts. But what’s been challenging here is there’s no real source of information on how to handle this because it’s so new.”

Recently, Amp Pegues, head coach of the 2-time PIAA Class 1A kingpin Farrell football team, said his players’ pride in their program would prevent malaise, and they would continue to work out on their own. That sentiment was echoed by Hickory’s Bill Dungee and Sharon’s Jason McElhaney.

“That’s a great outlook from Coach Pegues,” Phillian acknowledged, “and I’ve got to believe it would be similar to our program at Wilmington. I think one of the challenges is that accountability factor. I think for the players, working out on your own is more difficult than training with your team because when things get difficult and you’re training with your team there’s that camaraderie, that encouragement, and there’s teammates pushing you past where you thought your limits might be. When you’re not training together it’s hard to push as hard as when you’ve got the team behind you.

“So that’s going to be a challenge for the players, but I’ve got to believe that our guys are holding themselves accountable and I believe they’re going to complete the workouts and anything we ask them to do,” Phillian emphasized.

There is no definitive date on a return to normalcy, but Phillian forecasted, “I think that this is a great time for one of our team beliefs you’ve heard me say time and time again, and that’s being focused on your vision, not your circumstances. Right now, the way that we have to train (via videos) is a circumstance ... the potential of the season’s start being delayed is a circumstance. I’ve encouraged our team to stay focused on our vision and control the things that we can control.

“But if I had to guess ... we typically start with our summer workouts in June. My guess is that would certainly be delayed at this point; I don’t think we’ll be able to start as early in the summer as we normally do. With that being said, I am optimistic. I do think we’ll be able to get together as a team at some point this summer, and I also remain optimistic. ... I’m certainly remaining hopeful that our football season will start on time as normally scheduled.”

In the meantime, Phillian’s family is his focus; that’s his real “home team,” including newcomer Beckett, born just a couple weeks ago.

“Chelsea and I would love it if he was passionate about football the way that we are,” a chuckling Phillian related, adding more seriously, “but I know that we’ll certainly let him make his own path and we’ll support him in whatever his interests might be.

“I think that being a father, in so many ways, is like being a coach in the sense that, whether you’re coaching student-athletes or you’re raising your own children I think you try and be very encouraging, you try and focus on the positives while at the same time instilling discipline and accountability into their lives. Being a new father does have a lot of parallels with coaching,” Phillian observed.

“I also feel very blessed that in my life I had a great father (Mark) to learn from,” he continued. “I think that my father showed me, through his traits, what it means to be a great father, and those traits would be selflessness, humility, caring and demonstrating an unconditional love for your children. And I know that Chelsea was raised in the same way by her father (Paul Piccirilli), and those are also traits he’s demonstrated to me as my father-in-law. So having a great father to look up to in life, I believe, has really helped me to be a father, and also having a great father-in-law to share those examples.”

Also for Phillian, he had the benefit of his football “father,” venerable Terry Verrelli, who guided the Greyhounds to 314 wins including the 2008 PIAA Class AA commonwealth crown. Verrelli recently celebrated his 74th birthday.

The aforementioned men helped forge Phillian’s philosophy, as he related, “I would say in my life I focus on things in this order: I try to keep my faith at the top of the list, first and foremost; second, would be family, and after family we would use football as a kind of metaphor for my work life -- whether as a teacher or football coach at Wilmington.

“I think one of the great challenges when you have a young family is being able to balance your time,” Phillian continued.

“Teaching rigorous courses such as AP calculus and coaching football, those are big-time demands put on a person’s time, so I think being able to balance that time is critical. And one of the things that has allowed me to do that is that I have a great group of assistant coaches that are so hard working, who are there working for the common goal. That’s what, I believe, allows me to balance everything. Without the coaching staff that I have I don’t know that I’d be able to do an adequate job maintaining my faith and my family.

“So I really have to give the credit to the coaches who I’m so fortunate to work with each and every day, allowing me to maintain the necessary balance and to strive to be a faith-filled man, to strive to be the father and husband that I want to be, and to maintain that balance in my life,” he reiterated.

However, he made no pretense who serves as his bedrock.

“I am beyond grateful for the support that I receive from my wife Chelsea,” Phillian began. “I do believe the fact that she grew up with her dad being the head coach at Sharpsville, I believe that’s helped her to understand the time it takes to, not just be a football coach, but to do it well. She’s watched that her whole life, with her father the head coach at Sharpsville. He did it extremely well and is still doing it extremely well.

“She knows what the time commitment is in order to be successful, and ...” Phillian said, pausing to compose himself, “I would not be where I am today without the love and support of Chelsea. Her love and her support, I believe, is what’s allowed me to take this on, has allowed me to coach football in the capacity I do. Really ... there are not enough words to describe my gratitude and my appreciation to her for allowing this to happen.”