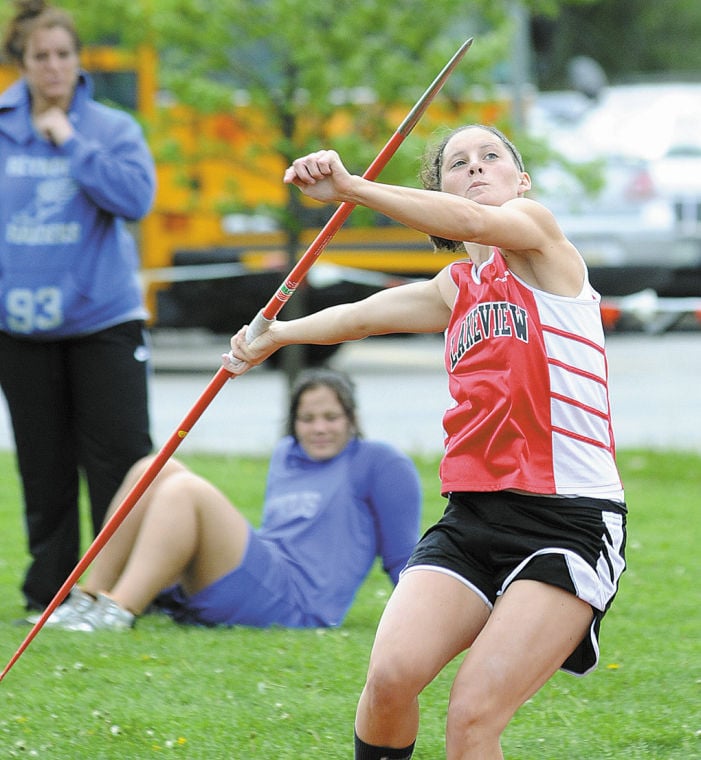 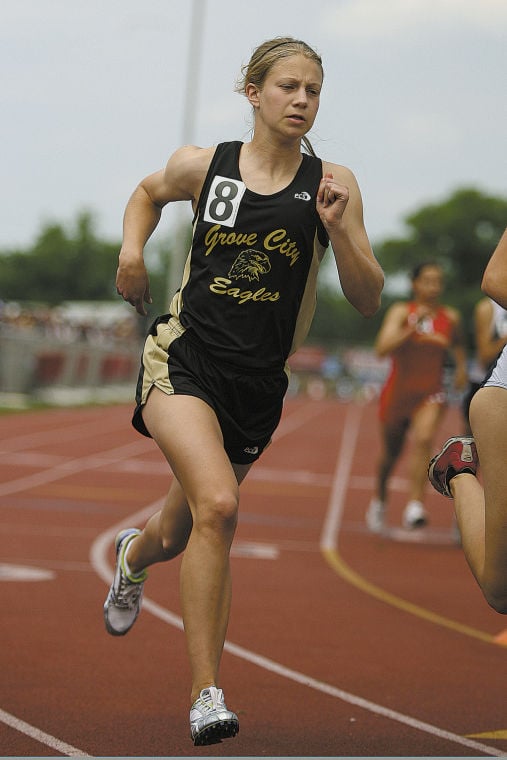 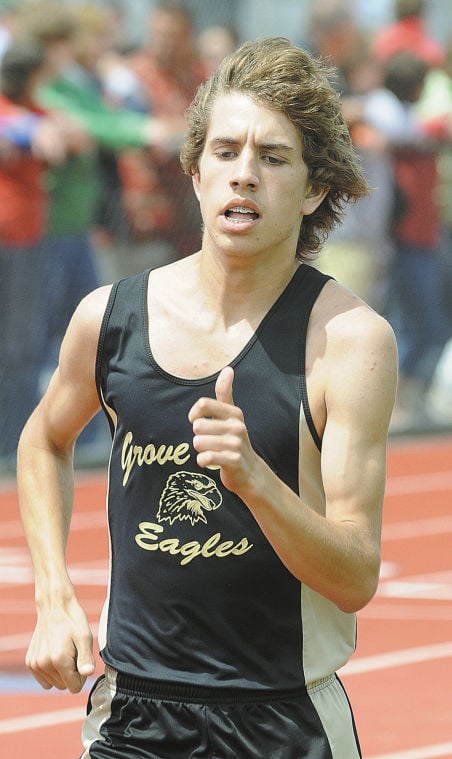 Lakeview High senior Fawn Miller has already proven herself on the scholastic track and field level and Lady Sailors’ head coach Greg Slatcoff is hoping that rubs off a little bit on her teammates.

“Fawn is a leader by doing,” Slatcoff said of the defending PIAA gold medalist in javelin.

“She’s really doing a nice job doing the individual stuff right now,” which takes her away from a lot of the team-oriented activities at practice, Slatcoff said.

“The kids see that she has to do that,” he noted. “They see that she wants to be good and she sets the pace for everybody else.”

And, if the Lady Sailors hope to duplicate last year’s 8-2 overall finish, they’ll have raise the bar quickly.

“This is definitely a building year,” Slatcoff said. “When you lose the caliber of athletes last year that we had (2009 seniors Kayla Campbell, Ashley Lewis, Josie Davis and Brittany King) ... this is (now) an unknown team. (But) this team has a lot of surprises in it if they can figure out getting out of their comfort zone.”

Along with Miller, senior Tory Stankovich returns to lead the Lady Sailors.

“She’ll also be helping out in the sprints,” Slatcoff said.

In addition to her javelin chores, Miller will also be taking part in some of the sprinting events, the long jump and at least one relay, Slatcoff said.

Backing up Miller on javelin will be junior Michelle Brown, who will also throw the shot put, the coach said. “She’s another pretty important athlete we have.”

Helping out Miller on sprints will be junior Marie Bernsdorff, who will also be involved in one of the jumps, Slatcoff said.

Freshman Courtney King will also be in the mix in the jumps, a relay and sprints, the coach added.

Like Slatcoff with Miller at Lakeview, Grove City head coach Mickey Hardenburg hopes his younger girls can pick up a thing or two from senior Hana Casalnova.

“Hannah is a standout in no matter what she does, so that’s a huge bonus there,” Hardenburg said of the three-time PIAA qualifier.

Another strong point of his team will be sophomore Eliza Lowe, who will again be the Lady Eagles’ top hurdler.

Lowe will also run sprints this season for Grove City, the coach said.

Hardenburg said some of the field events could prove to the Lady Eagles’ biggest weakness, he added he believes the strong contingent of distance runners who shined last fall on the cross country trails may make up for it.

He said he also expects big things again out of Shannon Bishop and Kylie Fagan in the jumps,

“They look like they’re in that position again this year to kind of pick up where they left off,” Hardenburg said.

“Our biggest goal is to get as many kids qualified for the districts as we can,” Hardenburg added. “That’s our overall goal. “We put kids in the events that will best help them achieve that goal.”

With state qualifier Claire Creasy back for her senior season, Mercer head coach Tom Wise said he hopes his teams handful of seniors and bevy of underclassmen and look to her for inspiration.

“She’s the leader of our team,” said Wise. Creasy will again handle the hurdles for Mercer as she looks for a return trip to Shippensburg.

In the field events, Wise said he hopes the younger girls can learn from juniors Cassie Flannery and Savannah Schaa. Flannery will throw the javelin for the Lady M’s, while Schaa will hurl the shot put.

“The majority of our kids are freshmen and he have some sophomores,” Wise said. “There’s some pretty good speed in the that group.”

Among them are sophomore Shelby Ryan and freshman Courtney Corban, who Wise said he plans to use in the sprints and relay track events.

“We have more girls out than last year,” Wise said. “We keep growing and I think the girls are finding that track’s a pretty fun sport and there’s something for everybody.”

Despite having 29 girls on the team, Wise said he hoped to borrow a few girls from the softball team to give his thinclads a boost.

“That kind of fell through at the last minute.

Albeit, Wise said he still like the team’s outlook as the season begins.

“I think we’re defintely heading in the right direction,” he said, noting he hopes to see a lot of his girls perform to their fullest potential before the end of the year.

“If the majority of our kids can do that, we’ll have a successful season,” he said.

In addition to Creasy, seniors on the team include Candace Cozad, Alyssa DeAngio, Kendra Mariacher and Alexandria Watson.

Mike Kish is returning for another season as Slippery Rock’s track and field coach and will have three senior girls on his team Ñ Kate Brozenic, Cory Kirk and Chelsie Lott.

The Tigers, who return on seniors Marquis Lawerence and Shamir Harper, are young and experienced, he said. Add in a renovation at the school that displaced the team’s practice area, and thing are even more tricky, Stucchio said.

“We’re going to teach them how to do track without a track,” he joked. Until a new practice track is built, Stucchio said the Tigers are working out “whereever they can find space.”

“It’s been interesting,” he said.

With just Lawerence and Harper as leaders, the Tigers have gone back to basics, Stucchio said.

“Typically when i have guys come back it helps a lot,” he said. “It’s been hard without a lot of returners. Our first priority is learn about track and field, Secondly would be qualifying for districts. (But) we got 36 guys all working real hard, all getting prepared and ready.”

Lawerence will he handling a lot of the throwing events in the field, Stucchio said, while Harper will again run hurdlers. Nideen Johnson will run sprints, while Omar Johnson will do the jumps, the coach added.

“I look for (Omar) Johnson to do very well this year,” Stucchio said.

Hanzel Delacruz will be the Tigers’ top distance runner, the coach said.

Stucchio said he hopes to see his boys improve throughout the dual meet schedule and then concentrate on the District 10 Championship.

On the boys’ side for Grove City, Hardenburg said he sees his team as inexperienced, but ready for the challenge.

“They’re young,” Hardenburg said. “We have a lot of new people. (But) the distance (runners are) going to be very strong. There’s a lot of leadership there Ñ guys that have been there (to the District 10 and PIAA Championships). That helps a lot.”

Among them are leaders Jake Kildoo, Aaron Anderson, Mark Jaskowak and Joe Hoffman.

“We have some new kids,” he said. “We don’t know how theyre going to fit in.”

Lakeview boys head coach Brian Cumpston knows long jump senior sensation Chad Blair has the potential to make another trip to the PIAA Championships in Shippensburg, but he also likes the chances some other athletes could have at their first berths.

“There’s a couple kids that if the cards fall right they could end up getting there this year possibly,” Cumpston said, noting the competitiveness among his team is really starting to become apparent,

“That competitiveness that we didn’t see out of them last year we're seeing this year and that's a very good thing,” he said. “We’re getting more of the (type of) kids we want to work with Ñ maybe not the best athletically, but coachable É and that’s a big thing. We’re getting athletes out that have a great attitude.”

The Sailors have a much larger contingent to pull from than in years’ past as the team boasts 47 boys.

“We have a lot of guys that we can put just about anywhere we want and have a positive impact,” Cumpston said. We’re gonna be a very very competitive team this year.”

Besides long jump where he's the defending District 10 champion, Blair will also compete in high jump events along with relays and sprints, Cumpston said.

Among the team’s newcomers is senior Jeremy Westlake. As a quarterback for the Sailors last fall, Westlake put up some impressive numbers in leading Lakeview to a 6-4 mark.

Westlake will work in on the high jump and along with junior Billy Knapp will toss the shot put.

Junior Jonah Mertz has run one of the fastest 400 times Cumpston said he's seen in several seasons and will handle those duties for the Sailors.

Junior Adam Watson will also be in the mix for long distance events, as will freshmen Billy Kinsey, Adam Dosch and Devon Workman. the coach said.

Alex Patterson, another junior, will run the 300 hurdles and will also throw the javelin along with Jake Plotner, also a junior, and Alex Zappia, a sophomore.

The Mustangs will be under the guidance this season of first year head coach Mike Morneweck, though he doesn’t believe that will slow their gallop.

“We have a lot of good guys coming back,” Morneweck said, noting he hopes to see more Mercer athletes qualify for the District 10 meet and maybe even have a few make it to the PIAA Championships as the Mustangs improve off last season.

“We have a pretty strong core,” as far as sprinters and middle distance runners go, the coach said.

One newcomer he likes is senior Rawlins Huntley, who starred for the Mustangs on both the gridiron and hardwood already this year.

“He’s looking pretty good in quite a few different areas where we’ve tried him,” Morneweck said, adding the Huntley will likely be one his top sprinters along with Geoffrey Faltot, another senior.

Another impressive newcomer is Alex Rabold, he said. The senior was one of Mercer’s top soccer players last fall. Morneweck said he hopes to have Rabold run the 400.

A lot of the underclassmen will handle throwing duties in field events, the coach said, including junior J.T. Mannozzi.

“We’re looking at a good season,” Morneweck said. “We’re going to have some fun.”

Ayron Gallagher, who starred at quarterback at times last season for the Rockets, is Kish’s lone senior this season on the boys side.