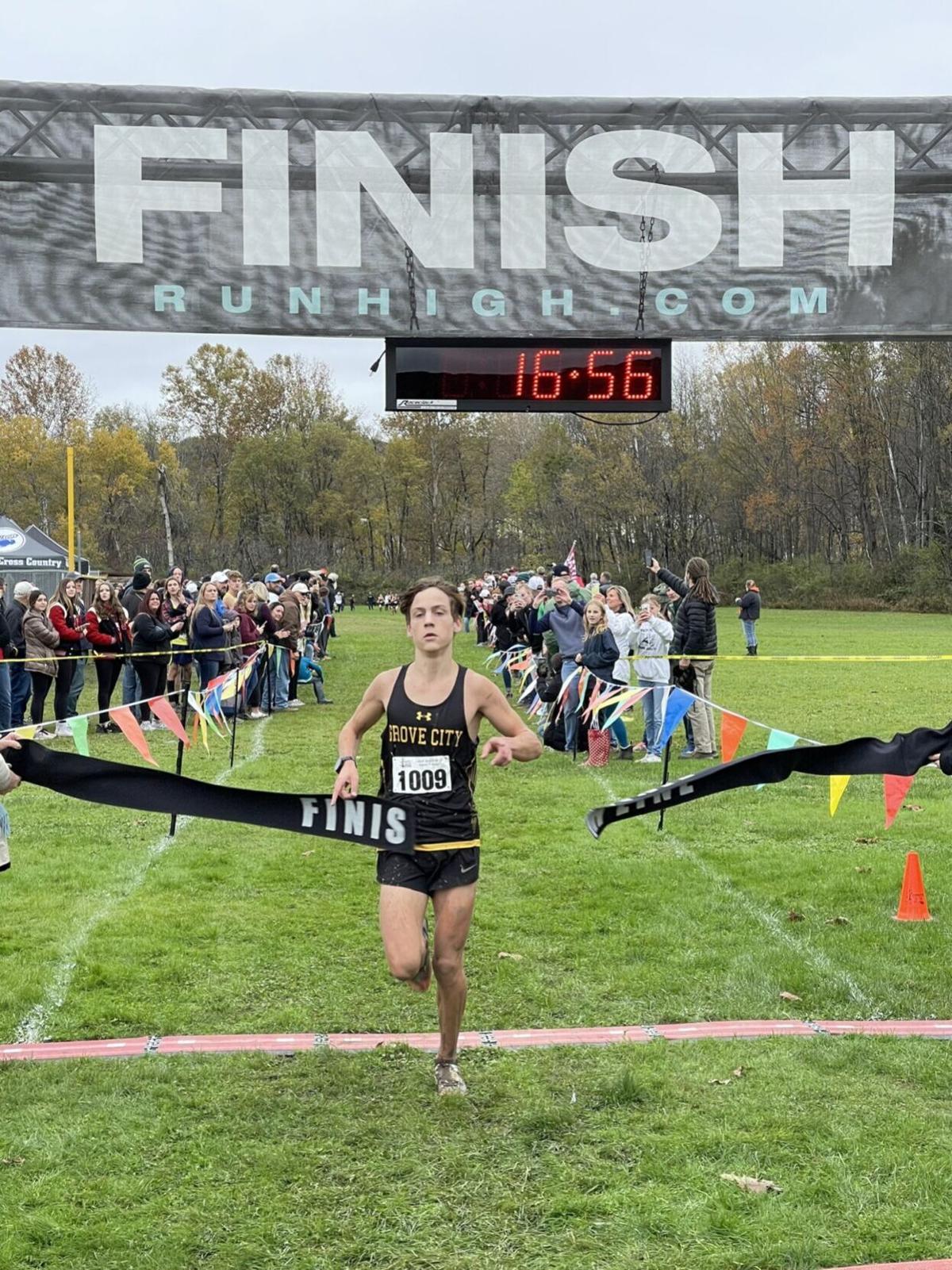 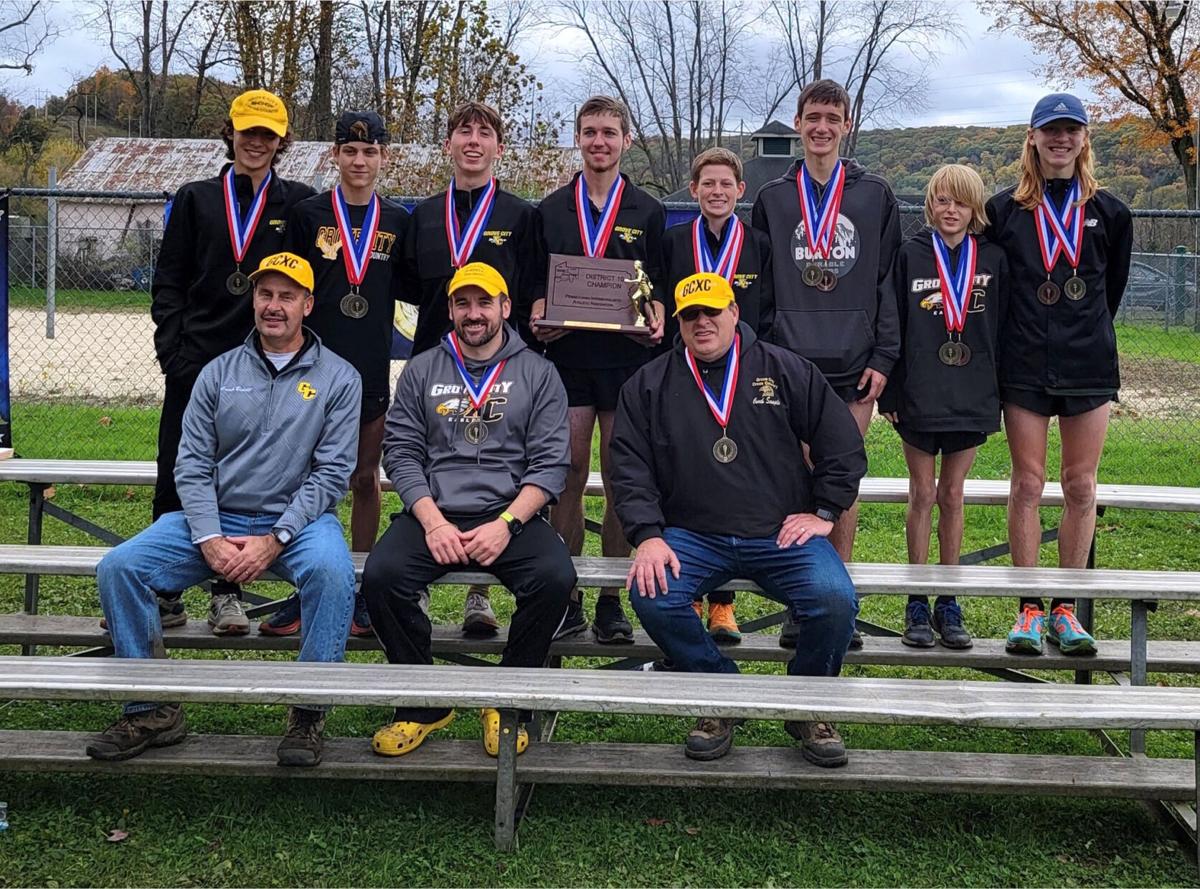 “I envision it comin’ down to ... who’s got the guts?,” succinctly summarized Sample.

Grove City’s guts will be on display as the latest Eagles’ edition tries to add to the proud program’s legacy. Last weekend they annexed a 4th consecutive District 10 championship – the 15th in school history (2nd in D-10 annals to North East’s 23, according to district cross country chairman Matt Vannoy’s research).

Parkview Golf Course in Hershey will serve the annual event’s venue. The Class 2A boys’ race commences at 12:30 p.m. Saturday. The Eagles will land at the PIAA Championships for the 19th time in program history (tied for 5th-most in D-10 all-time, according to Vannoy).

Regarding Grove City’s most recent D-10 title, Sample observed, “I thought going in we had the edge with the depth we have. I have five guys who have done it all year long against different competition throughout the state, so we felt pretty confident. Actually, all seven guys performed at a high level this year.

“As it turned out, we went one-two-three (Josh Jones, MJ Pottinger, Caleb Hawke). I don’t think, in my twenty-plus years of coaching I’ve ever seen that happen at any of the races. I didn’t expect it,” Sample admitted. “I figured there would be a few – Tommy (Hunyadi from Hickory) and Luke (Brown) from Cathedral Prep proved throughout the season that they were capable of running with our boys. But there seemed to be a point on the second lap where those guys were kind’ve fightin’ to stay in it, and my guys were (able to) maintain the pace they started out from the beginning of the race.

“It was kind’ve surreal watchin’ them come through one-two-three, and then our four-through-seven (runners, including Quinn McKnight, Justice Brown, Isaiah Stauff and Wyatt Shepson) were all in medal contention or were medalists. So it was pleasing to see their performance. Satisfied,” Sample assessed.

The lengthy litany of great Grove City individuals through the years includes Mike McWilliams, Jake Kildoo and Jonah Powell and numerous others. There also have been several outstanding squads, including the 2012 state runners-up (losing to Pottsgrove, 96-99) in 2012 and the 5th-place 2015 contingent. But Sample said this season’s squad of Eagles parlays that pack mentality for success.

“The thing that kind’ve stands out is (the 2021 Eagles) are young, but they run like veterans – like those two teams (2012, 2015) were. That’s (one) difference in them,” Sample said, continuing, “the other is we run more in a pack. Those other teams had some frontrunners. We talked to Josh Jones this past week about bein’ that frontrunner for us, mixin’ it up with other teams’ top runners, and he started to emerge as that. The thing that’s nice is we have a pack right behind him that’s pretty tight.

“Josh Jones has emerged as a very good leader of the team (becoming the program’s 13th D-10 individual titlist, covering the Myers’ Complex course in 16:55). He’s probably been our number one more times than the rest of the runners on the team, but he definitely hasn’t won every race that we’ve been in; there’s been others who’ve been ahead of Josh from time to time,’ Sample said. “But he’s emerged in these last few races as being one of those guys who maybe can crack the top half of the medals division on Saturday. But if he doesn’t, I’m hopin’ that he can bring along four or six other guys who’ll be right there in medal contention, too.”

Grove City’s success this Saturday also could be based on the Foundation Race from this past September, which took place on the same Parkview Golf Course layout that will serve as Saturday’s venue. In an annual benchmark event each season, the Eagles were runners-up to Northwestern Lehigh, 89-94. Lampeter Stasburg (107) was 3rd.

Forecasting Saturday, Sample assessed, “Northwestern Lehigh, the team that beat us at the Foundation Race back in September. and there’s the two-time state champions, Lewisburg, they seem to be getting faster and rounding into championship form as they have the last couple years. One other team was right behind us (Lampeter-Strasburg). It was a tight race that came down to the last 400, 800 meters.

“I think the nervous edge that (the Eagles) may have had if this was the first time that they saw the course, that’s gone!” Sample stressed, cautioning, “But you have to remember, this is such a young team – there’s only two or three of the (top) seven who’ve ever been on the state course before. We’ve got two freshmen who’ve never been there and a couple junior varsity runners who haven’t run that.

“If we hadn’t gone to the Foundation Race there would be those nervous butterflies beyond what you would want,” Sample said, emphasizing, “But I don’t think this time that they’re going to be intimidated by anything. I think they’ve got a lot of confidence. They saw the course, they know what it’s like, they’re gonna be able to remember the difficult or challenging parts of the course, and we’ll be better prepared for it Saturday because they’ve been on it before.”

“They’re lookin’ an awful lot like teams that have been there in the past, in the hunt (2012, 2015) – with some slight differences. They’re young, and they have a very tight pack, with no dominant frontrunner, like a Danny Jaskowak (who placed 3rd in 2015) or an Aaron Benka – the leaders of those teams back in the early 2010s.

“Back in 2012 there wasn’t the social media and there wasn’t the ability to track teams the way you’re able to now. We were second by three points ... We had no idea how good we were, comin’ in; (Pottsgrove) didn’t, either ... or maybe they did, I don’t know ... But it was kind’ve an eye-opener as to how good our team really was that year,” Sample reflected, adding,

“I know what we’ve done this year, the number one-ranked team (Northwestern Lehigh) we were second by five points this year (at the Foundation Race). But, yeah, it looks an awful lot like 2012 or 2015.”

Sample is secure his pack will peak on Saturday, which gives Grove City’s Eagles an edge.

“It’s definitely a collective team effort. Just the vibe, the personalities of the kids on the team, the way in which they – not only during practice work together, but even outside of practice. They’re a very close-knit team. So there’s definitely more of an emphasis on the team aspect,’ Sample said, noting,

“We’ve run in every (weather) condition so far – we ran in the mud last weekend, we’ve been in the heat, we’ve run hilly courses, we’ve run fast courses. The kids have always been up for the challenge, no matter what the conditions or the course were like, so I expect nothing different. We’ll just see whether or not we have enough at the end.”