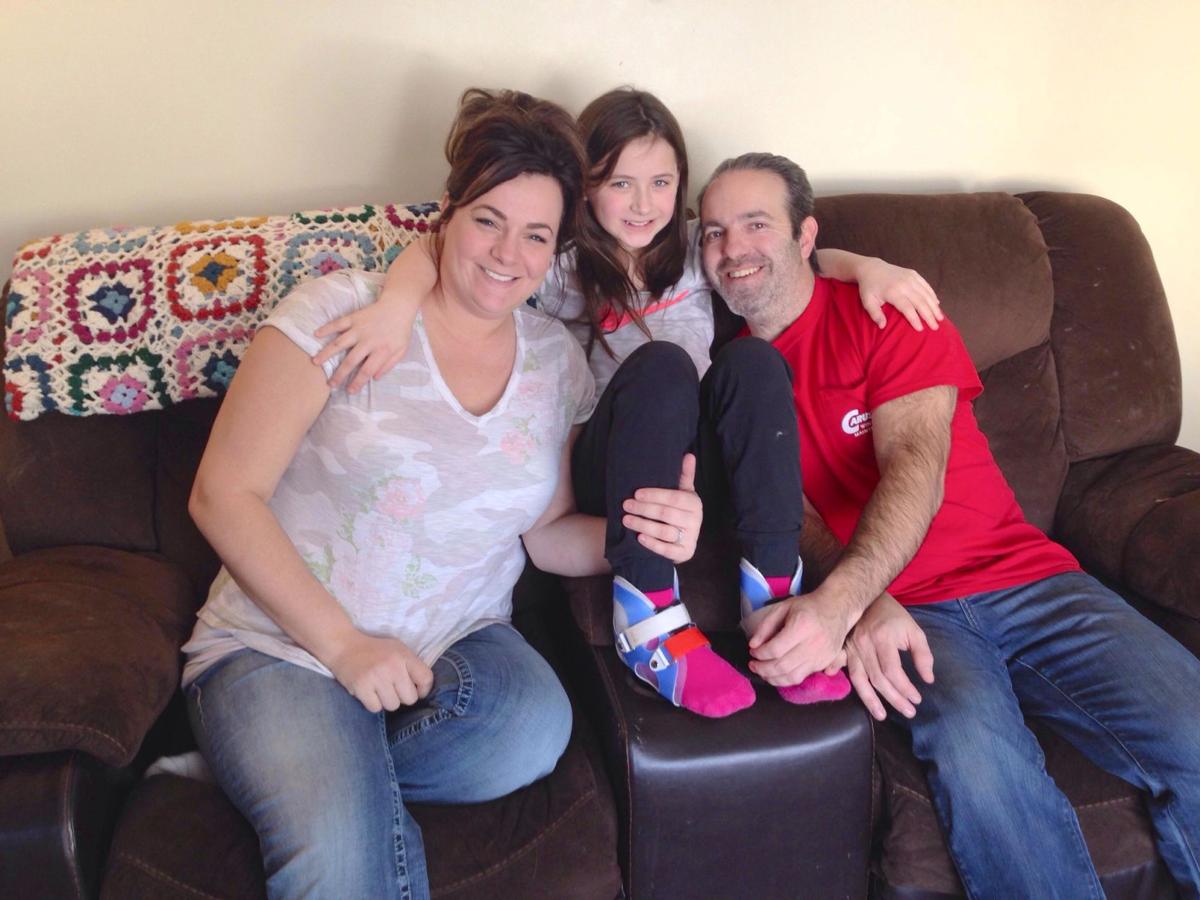 Brynn Adams and her parents, Allie and Chris Adams, gather for a group hug at their Grove City home. The nine-year-old girl was recently diagnosed with a rare neurological disorder. 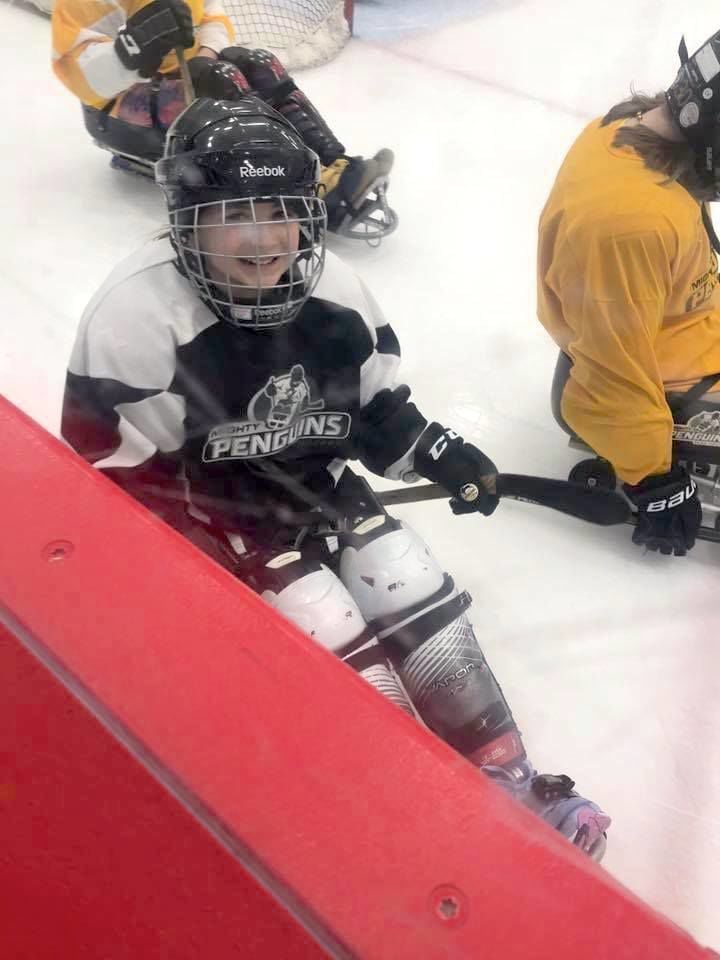 Brynn Adams, who had to give up her beloved softball, has been enjoying a new sport lately – sled hockey. 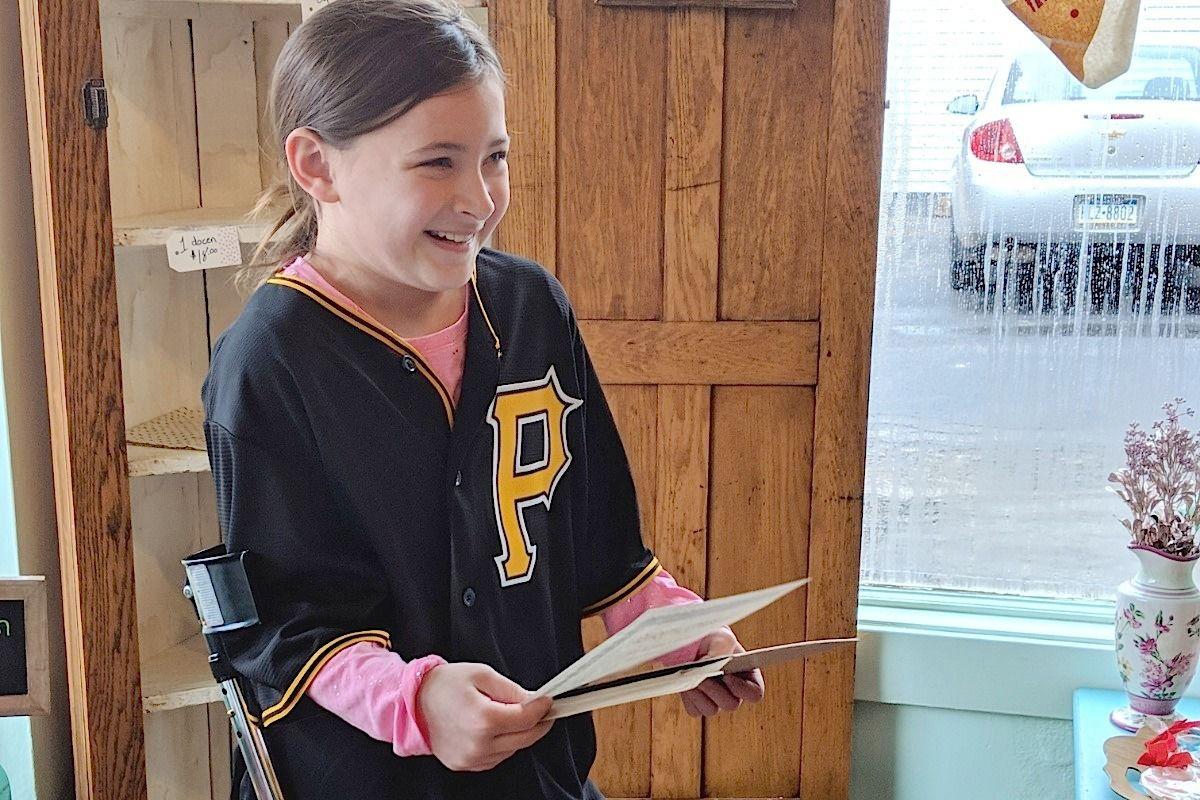 DuraEdge Products recently surprised Brynn Adams with Pittsburgh Pirates gear and an invitation to throw out the first pitch at an upcoming game. 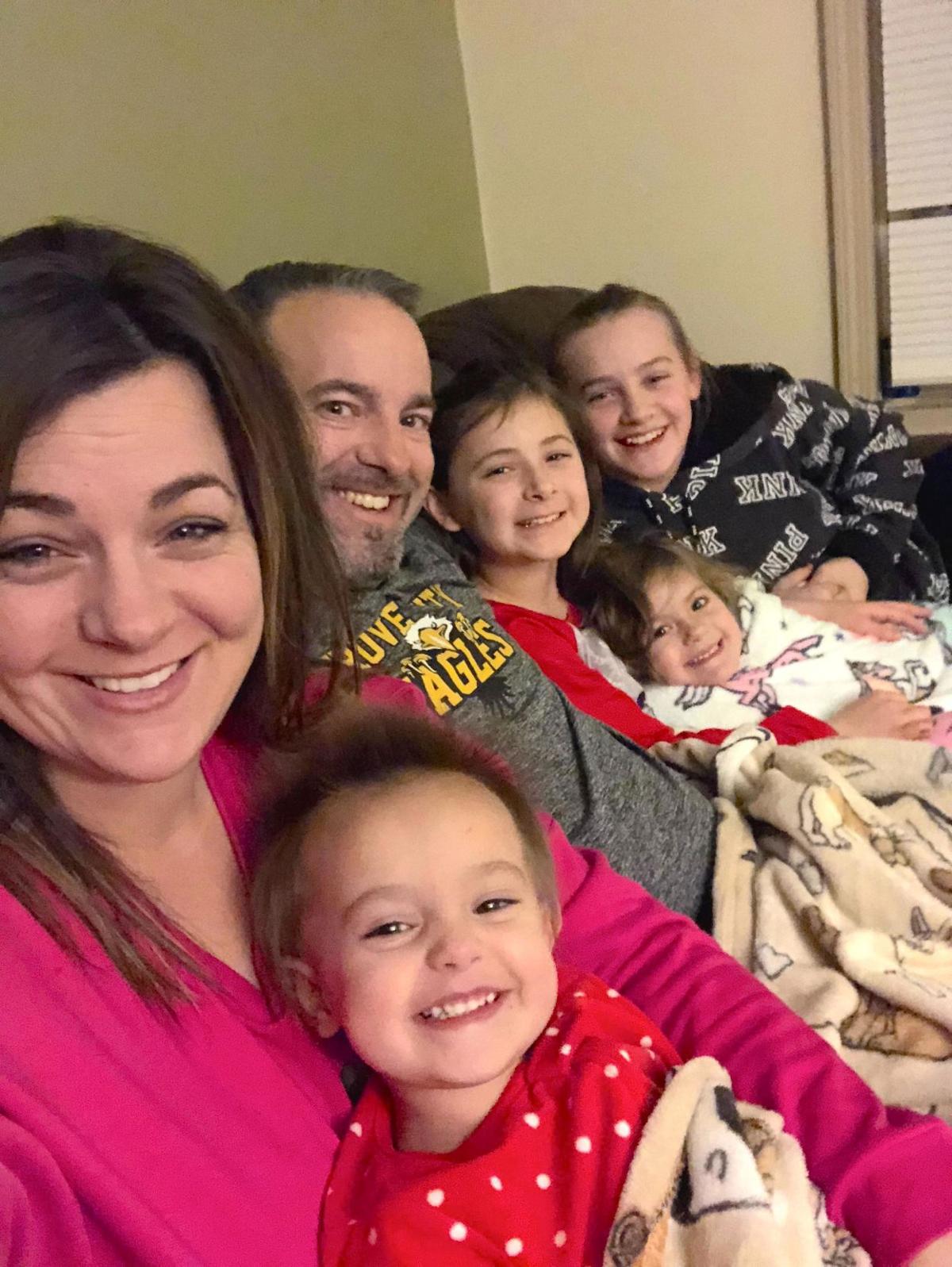 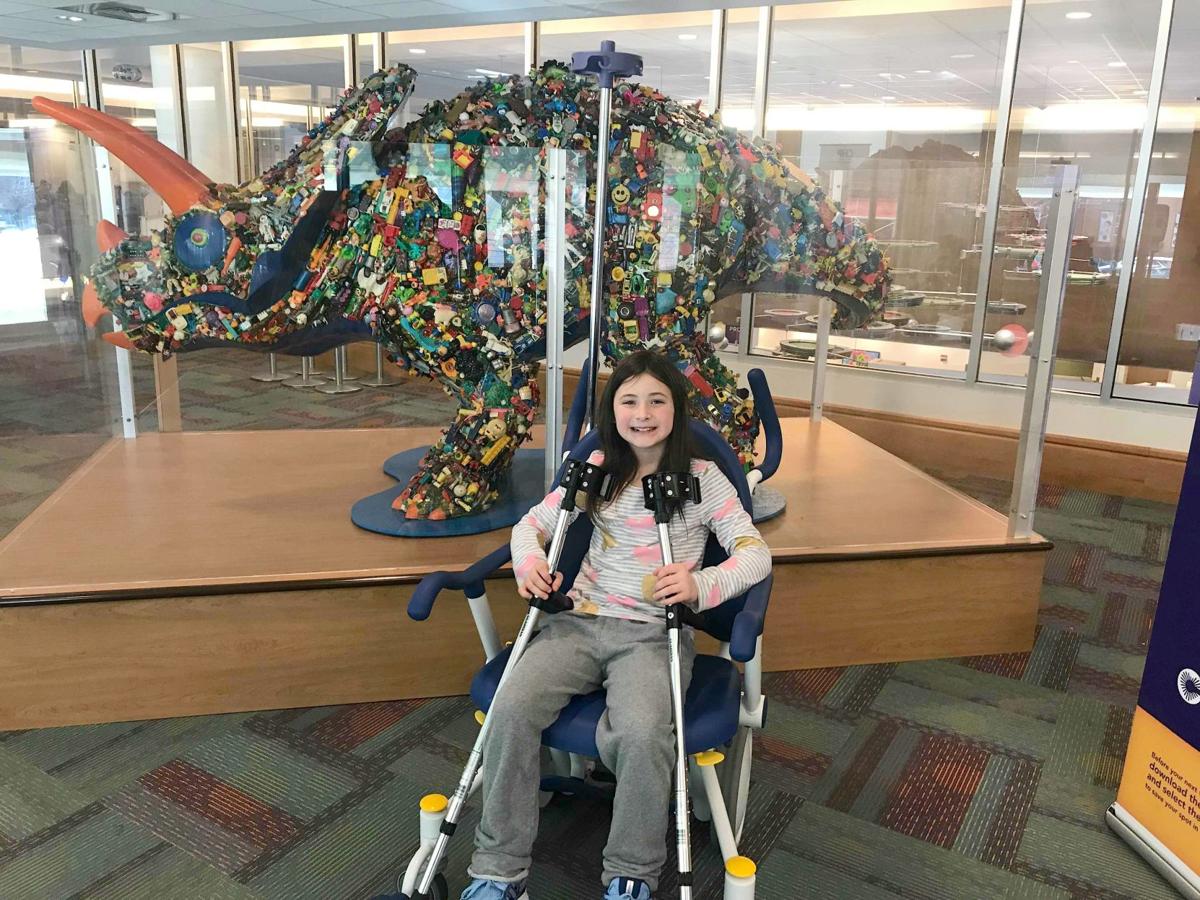 Brynn Adams and her parents, Allie and Chris Adams, gather for a group hug at their Grove City home. The nine-year-old girl was recently diagnosed with a rare neurological disorder.

Brynn Adams, who had to give up her beloved softball, has been enjoying a new sport lately – sled hockey.

DuraEdge Products recently surprised Brynn Adams with Pittsburgh Pirates gear and an invitation to throw out the first pitch at an upcoming game.

GROVE CITY – After years of trying to figure out what was causing symptoms like muscle spasms and fatigue, Brynn Adams and her family are finally getting answers about her condition.

“I never took ‘no’ for an answer,” said her mother, Allie Adams.

Brynn, 9, who has been in and out of doctors’ offices since she was six months old, was officially diagnosed in October with hereditary spastic paraparesis, or HSP, a rare neurological disorder.

The Adams family, which includes her father Chris and siblings Kailyn, 11, Addie, 3, and Maddie, 2, was gathered at their Grove City home on a recent afternoon.

Brynn and her parents explained their experience, hoping to educate people about HSP, a progressive disease that is linked to a gene mutation.

HSP is classified as “complicated” or “uncomplicated,” depending on how much of the body is affected. Brynn’s HSP is “complicated.”

“I just kept taking her to the doctor,” she said.

There have been many tests and appointments – and lots of questions and prayers. Brynn has continued to have spasms and weakness in her legs, plus fainting.

She tires easily. She is in cyberschool, and she had to stop playing softball, something she loves.

The disorder is affecting Brynn’s ability to walk, and it will likely eventually affect things like her arms, internal organs, and eyesight.

While the family feels some relief with having a diagnosis, they’re still trying to come to terms with what lies ahead.

Brynn uses arm crutches and a wheelchair when needed, and she just started physical therapy. The spasms can be painful.

She takes multiple medications, and the next steps include Botox injections in her legs and feet, and a possible clinical trial involving medication delivered via catheter into her spinal column.

The family visits UPMC Children’s Hospital of Pittsburgh several times a week, and Brynn has been fitted for a large wheelchair.

There have been a lot of out-of-pocket costs, and the Adams family will have to add a wheelchair ramp to their home, which needs work to accommodate Brynn’s equipment. They also need to modify their van or buy a new one.

Mrs. Adams, who owns Allie’s Sweet Tooth bakery in Grove City, has had to cut back on business hours, but she said her customers have been understanding and supportive, along with family and friends.

The family is also grateful for DuraEdge Products, a Grove City company that supplies many Major League Baseball fields with materials like clay and sand.

Mrs. Adams has made cookies for DuraEdge, and when she had to delay a recent order, she explained what was going on with Brynn.

“I just immediately wanted to do something to help out,” said Molly Buxton, marketing director for DuraEdge.

The company set up a GoFundMe account to raise money for Brynn’s medical expenses. They surpassed their initial goal of $5,000 and increased the goal to $10,000. So far, donations total $8,415 in the account, which is called “Brynn’s Bullpen.”

DuraEdge learned that Brynn loves the Pittsburgh Pirates. They connected with Matt Brown, a groundskeeper for PNC Park. He visited the bakery one day with Buxton to deliver a VIP package.

Brynn received some Pirates gear, and she has been invited to throw out the first pitch at the May 24 game. A bus will transport people from the Grove City area who are interested in attending through a group ticket sale, Mrs. Adams said.

“We just fell in love with her,” Buxton said of her first meeting with Brynn.

Mrs. Adams has started a Facebook page called “Brynn’s Bullpen,” where she posts updates about her daughter along with photos.

The Grove City Girls Fastpitch Softball team is planning a tournament for this summer to support Brynn, and Brynn wants to host a cookie-decorating class at the bakery as a fundraiser.

There’s also a PayPal account for donations for medical expenses; the email address is BrynnsBullpen@gmail.com

Mrs. Adams’ online research has connected her with other families caring for a loved one with HSP. She also uses Amazon Smile to shop online, selecting the Spastic Paraplegia Foundation to receive part of the proceeds.

Brynn, who is in fourth grade, would like to be able to return to school and learn how to play an instrument. She’s kept in touch with her friends, and she enjoys language arts, math, puzzles, and painting.

She’s sad that she can’t play softball, but she’s found a new way to stay active – sled hockey. Players are strapped to sleds, and they propel themselves around the ice rink with their arms.

The Mighty Penguins has a sled hockey program at the UPMC Lemieux Sports Complex in Cranberry Township, where Brynn has met another child with HSP.

“They welcomed her with open arms,” Mrs. Adams said of the Mighty Penguins.

Brynn will need mobility devices for the rest of her life, and dealing with HSP continues to be a huge adjustment, Mrs. Adams said.

There are good and bad days, and the Adamses are thankful that Brynn is not experiencing any side effects from the medications.

Brynn has changed her diet, and she has to be careful to not get sick; people with HSP are more susceptible to germs.

Brynn is comfortable telling her parents and doctors what is bothering her, which is helpful. The family always has heating pads and weighted blankets at the ready.

Kailyn has been a great big sister, carrying Brynn around the house and accompanying her to appointments, which are often rewarded with Brynn’s favorite food – Chipotle, Mrs. Adams said.

Her parents said that it is very difficult to see their child struggle.

They have been amazed by Brynn’s maturity in handling her diagnosis, and asking questions about the future.