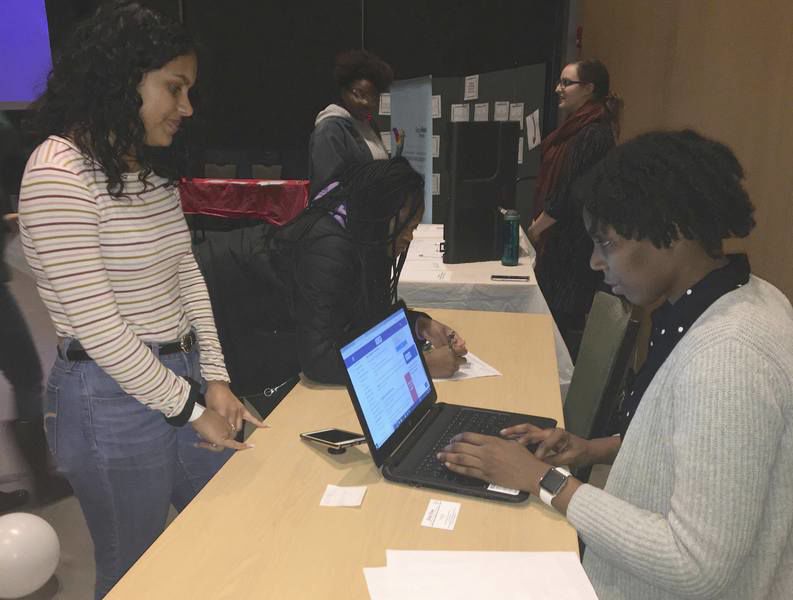 Slippery Rock University students, from left, Katherine Castillo and Erikka Williams register to vote with help from Keshia Booker, right, during a “Rock the Vote” event Thursday night at SRU. 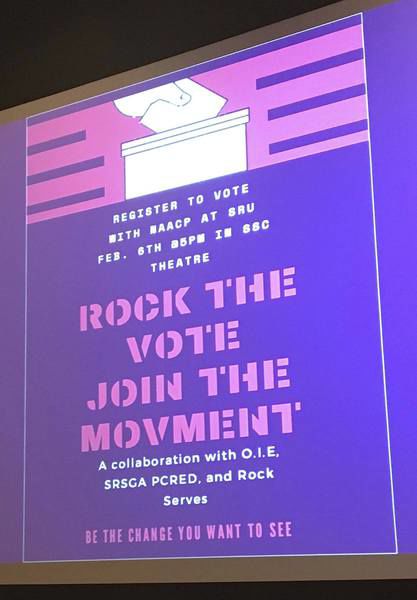 For more information about Rock the Vote, visit rockthevote.org 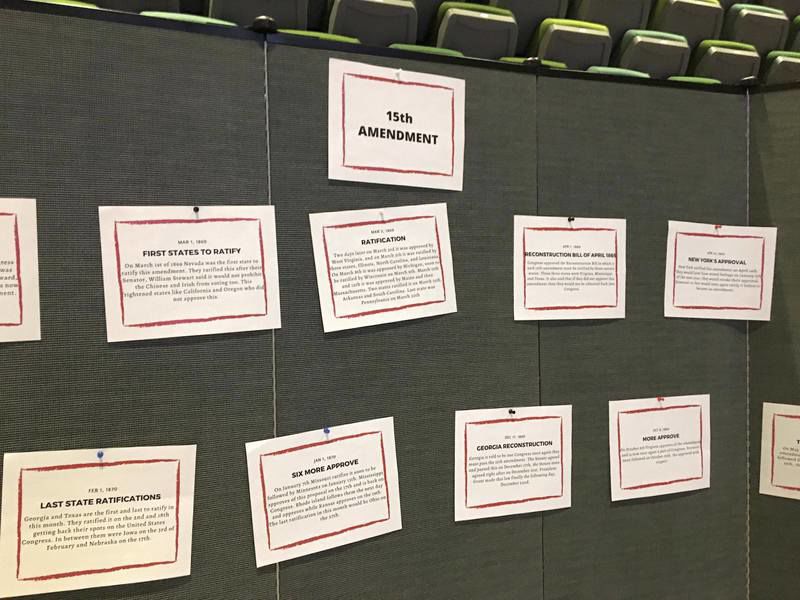 Attendees at Slippery Rock University's Rock the Vote learned about the 15th amendment, which gave African American men the right to vote.

Slippery Rock University students, from left, Katherine Castillo and Erikka Williams register to vote with help from Keshia Booker, right, during a “Rock the Vote” event Thursday night at SRU.

For more information about Rock the Vote, visit rockthevote.org

Attendees at Slippery Rock University's Rock the Vote learned about the 15th amendment, which gave African American men the right to vote.

The next generation of voters lined up Thursday evening at Slippery Rock University to register or update their information.

“I do want to have a say,” said Katherine Castillo, an 18-year-old freshman from New Jersey majoring in biology: pre-medicine.

She registered to vote with help from Keshia Booker, assistant director for multicultural development in SRU’s Office of Inclusive Excellence, or OIE.

OIE and the SRU chapter of NAACP hosted “Rock the Vote” in the theater at the Robert M. Smith Student Center on campus, encouraging students, staff and faculty to complete their registration if they’re going to be first-time voters, or to update their records if needed in time for the primary election.

“We have a lot of ‘your vote matters,’” Booker said of spreading the word, adding that she will take care of mailing the forms.

SRU has hosted smaller voter registration drives in the past, and this is the first time organizers are using the “Rock the Vote” campaign, which is a nonpartisan effort that aims to “build the political power of young people,” according to rockthevote.org

“It’s a good time to register,” she said.

Her age group – Booker says that Rock the Vote targets ages 18 to 24 – needs to be more informed about politics and elections, Castillo said.

Castillo attended the event with Erikka Williams, a 19-year-old freshman from Pittsburgh who is studying biology: pre-physician assistant.

Williams registered to vote in her hometown, and she agreed that voting is an important process.

She wants to learn more and hopes that more people come together to make a change.

Rock the Vote attendees also learned about how to vote with an absentee ballot, and how diversity and inclusion is connected to the election – this year marks the 150th anniversary of the 15th amendment, which gave African-American men the right to vote.

A timeline on display showed the many steps leading up to the amendment’s passage.

“We wanted to take some time to celebrate that,” Booker said.

The event also tied in to Black History Month, which is recognized every February.

Student Emily McClaire was on hand representing the SRU President’s Commission on Race and Ethnic Diversity; she is the co-chair.

She was collecting feedback on the the commission’s plan to create a mission statement.

“Inclusion is near and dear to my heart,” she said.

There was also a display on the women’s suffrage movement, and a survey from the Student Government Association that asked students for ideas of what changes they’d like to see on campus.

The questionnaire is meant to help them see that their opinion matters, said Morgan Weeter, a 19-year-old SGA senator from Lower Burrell.

Both Weeter and Kordell Hawkins, a 22-year-old senior from New Castle, are studying political science.

Hawkins is the former vice president the the SRU chapter of NAACP, which also had a display at Rock the Vote.

When it comes to issues discussed during election time, Hawkins is interested in climate change, and reforming the criminal justice system.

He said that voters need to do their homework and realize that every election is important.

“This isn’t just a presidential election,” he said of this year, noting that voters will also be selecting members of the House of Representatives.

Thursday’s event was one of many being held at SRU this month in honor of Black History Month. This year’s theme at SRU is “Act Now, Join the Movement,” Booker said.

Upcoming events, which are coordinated by the OIE, include:

• Black History Month Keynote Speaker: Yusef Salaam at 7 p.m. Monday in the Smith Student Center ballroom. This is hosted by the Black History Month Speaker Committee and features Salaam, a member of the Central Park Five – a group of five men who were wrongly convicted of the 1989 assault and rape of a woman in New York City.

• “Beyond the Bus: The Lifelong Activism of Rosa Parks” at 12:30 p.m. Tuesday in room 210 at Spotts World Culture Building. This discussion is hosted by Phi Alpha Theta, the Gender Studies Club and the Feminist Majority Leadership Alliance at SRU.

• “What is Black Love?” at 5 p.m. Tuesday in room 319 at the Smith Student Center; discuss African American relationships during this session hosted by Alpha Kappa Alpha sorority.

• NAACP Founders Day Celebration at 5 p.m. Wednesday in room 319 at the Smith Student Center SSC; hosted by the NAACP Chapter at SRU.

• Frederick Douglass Institute Discussion Series at 12:30 p.m. Thursday in room 321 at the Smith Student Center; hosted by the FDI with information about receiving FDI grants.

• “Cuts and Convos: A Barbershop Experience” from 3:30 to 7 p.m. Thursday in the Smith Student Center ballroom; KINGS Org will offer free haircuts and refreshments.

• Paint and Sip at 7 p.m. Thursday in the Smith Student Center ballroom; SSC; hosted by Alpha Phi Alpha fraternity with painting and refreshments.

• Steel City Step Show at 4:30 p.m. Feb. 15 – The National Pan-Hellenic Council at SRU is sponsoring a bus trip to the Soldiers and Sailors Memorial Hall in Pittsburgh for a night of stepping, a dance style rooted in black history.

• “Am I Still Black If?” at 5 p.m. Feb. 17 in room 116 at Vincent Science Center; BSA hosts a discussion about African American stereotypes.

• “An Evening with Soledad O’Brien: Her Life Stories” at 7:30 p.m. Feb. 18 in the Smith Student Center ballroom. The SRU Performing Arts and Lecture Series hosts this free event featuring O’Brien, an award-winning journalist, entrepreneur and host of the weekly syndicated political show “Matter of Fact.”

• “Before the Central Park 5, the Scottsboro 9” at 12:30 p.m. Feb. 20 in room 111 at the Eisenberg Classroom Building. The history department hosts a discussion about nine African American teenagers accused of rape in Alabama in 1931.

• “Rock Talk: Men of Color in Today’s America” at 6 p.m. Feb. 20 in the Smith Student Center Theater; hosted by the Women’s Center and Pride Center.

• “My Name Isn’t” at 5:30 p.m. Feb. 20 in room 321 at the Smith Student Center. This discussion about stereotypes of African American women is hosted by QUEENS Org.

• Sunday Service at 5 p.m. Feb. 23 in room 142 in the Advanced Technology and Science Hall; worship service hosted by the Chosen Generation Gospel Choir.

• “Securing the Bag” on Feb. 25 in the Smith Student Center ballroom; time to be announced. This entrepreneurial fair is hosted by the Alpha Phi Alpha fraternity with information about five African American-owned businesses.

• Black Queen on Feb. 26 in room 102 at the Vincent Science Center; time to be announced; discussion hosted by QUEENS Org.

• BSA departs for cultural immersion trip to Atlanta on Feb. 28.

All Black History Month events hosted at SRU are handicapped-accessible and sign language interpreters are available upon request by calling Booker at 724-738-4440.