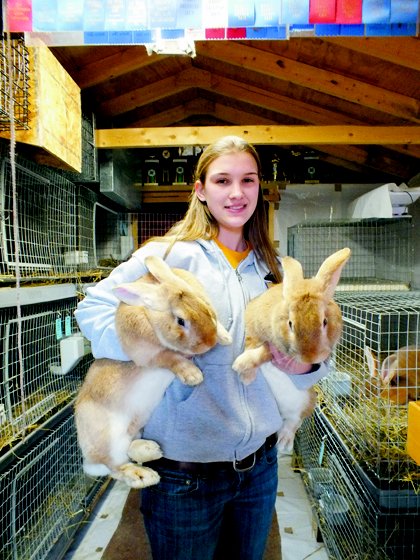 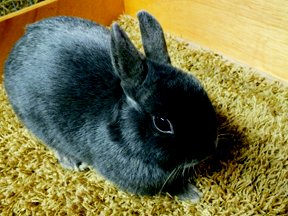 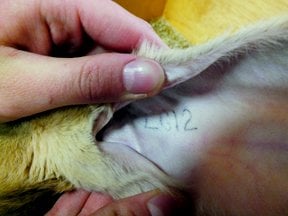 It all started with a few pet rabbits one Easter and now Miranda Lattyak's brood of bunnies has grown to include award-winning Flemish Giants.

"I just did it all on my own," Miranda, 16, a 10th-grader at Grove City High School, said of Leesburg Giants, a registered rabbitry she runs at her family's Springfield Township home.

Her parents, Clement and Tammy, who own Home Grown Flowers, a business next to their home, encouraged her every step of the way. Miranda took it upon herself to learn what it takes to raise and breed Flemish Giants, considered one of the biggest rabbit breeds.

Miranda loved caring for the pet rabbits, who live in a shed with the Flemish Giants, and decided to take things to the next level, especially when her parents said she couldn't have a horse.

"This is the next best thing," Mrs. Lattyak said as she and Miranda checked on the rabbits Friday evening in the shed, which also showcases ribbons, plaques and trophies Miranda has won.

Miranda studied materials available through rabbit breeding groups and talked to other breeders, learning what judges and buyers look for in the best Flemish Giants: body shape, toenails, teeth, fur color and condition and of course, weight.

The best females, or does, weigh at least 19 pounds, while the top males, or bucks, should weight at least 13 pounds. Does are typically larger than bucks and members of Miranda's rabbit family include One, Lady, Holly, Ginger and Luciano.

The 10 rabbits sat quietly in their cages built by an Amish man from Fredonia, their ears perking up and noses moving when Miranda opened a few cages, setting several of them on a handmade grooming stand that was a gift from her parents.

She's in her fourth year of showing and her efforts won her Best in Breed this year at one of the country's largest rabbits shows in Lebanon, Pa., hosted by the Pennsylvania State Rabbit Breeders Association.

Besides the state association, Miranda also belongs to the American Rabbit Breeders Association, the National Federation of Flemish Giant Rabbit Breeders and a 4-H Club out of Greenville, where she was recently elected president.

Traveling to shows and fairs and taking care of the rabbits takes up most of Miranda's free time, but she loves it and aspires to become a veterinarian.

"I try to pet them all," she said of her daily visit to the shed. She also shows llamas and an alpaca through 4-H.

Most of the money she earns working for the family business goes right back into the rabbits, which she sells to other breeders or rabbitries, the potential buyers answering a number of questions before Miranda decides if they're a good match; she does not sell them for their fur or meat.

"She buys everything herself," Mrs. Lattyak said. The exception was the shed, which Lattyak bought to help his daughter get started.

She's bred one litter so far and is preparing for the next one, the average being three to 12 kits, or babies.

"You don't want to touch the babies," Miranda said of the mother's natural instinct to care for her kits, which are born hairless and with closed eyes.

Miranda does help set up a nesting box and later tattoos the inside of the rabbits' ears with the letters "LG" followed by a number to show they came from her rabbitry.

Most veterinarians don't treat rabbits but Miranda has one retiring doctor she can call on, but also relies on other rabbit breeders in the area if she needs medical advice.

The rabbits' health and well-being is up to Miranda and she has to keep a close eye on their feet because their large body weight can lead to sores. Their feet have skin, not pads like other animals.

Miranda said her friends probably know more about rabbits than the average person and she also keeps an eye on her brother's pet rabbit, which he named Clement Rabbit.

"They know it's her," Mrs. Lattyak said of the rabbits' reaction to Miranda coming into the shed.

For more information about Leesburg Giants, visit leesburggiants.webs.com or call 724-748-3889.