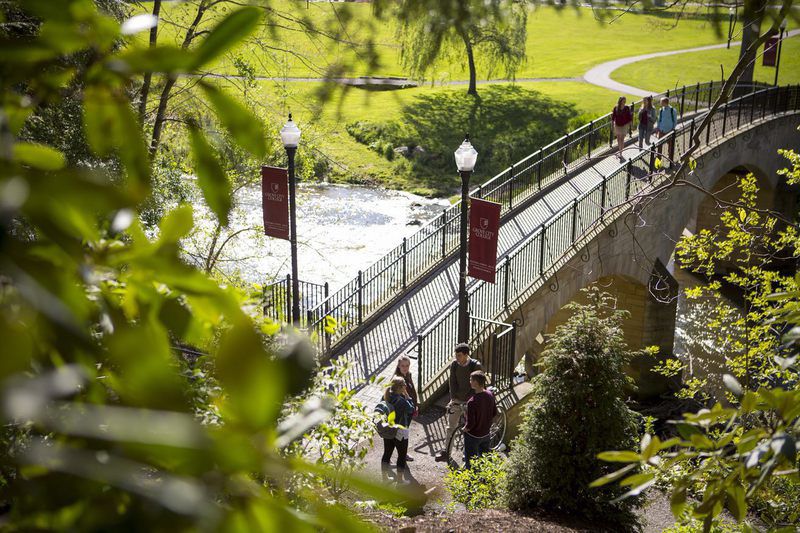 GROVE CITY COLLEGE | ContributedWithin the career outcomes rate of 96 percent, about 81 percent of the Grove City College class of 2019 are working full- or part-time jobs, pursuing fellowships, service roles or in the military and about 14 percent are pursuing post-graduate education, according to a recent survey of the graduates.

GROVE CITY COLLEGE | ContributedWithin the career outcomes rate of 96 percent, about 81 percent of the Grove City College class of 2019 are working full- or part-time jobs, pursuing fellowships, service roles or in the military and about 14 percent are pursuing post-graduate education, according to a recent survey of the graduates.

GROVE CITY – Grove City College entered 2020 with a new team of academic leaders, an eye on online growth, a new, in-demand major and a banner year for athletics.

In 2019, the private Christian liberal arts and sciences college named alumnus Dr. Peter M. Frank ‘95 as Provost and Vice President for Academic Affairs. Frank, an accomplished economist and educator, brings a new perspective the office and a deep understanding of Grove City’s mission, vison and values.

Interim Calderwood Dean Dr. Paul C. Kemeny was named to the post permanently in December. Kemeny, a prominent religion scholar, leads the school of humanities, while Dr. Richard N. Savage, who was hired in July, helms the Hopeman School and STEM disciplines, including the rapidly expanding Exercise Science program.

Last year the college also hired Dr. Janey A. Roach to head up the new Charles Jr. and Betty Johnson School of Nursing. Roach, a nurse, educator and experienced administrator, will oversee the new bachelor of science in nursing program. Coupled with a quality liberal arts education, students this fall can begin earning a BSN degree that offers excellent clinical training through an innovative private-public partnership between Grove City College and Butler County Community College that was announced in June.

In establishing the BSN degree, college President Paul J. McNulty said: “Nursing is a rewarding and fulfilling career that many students are interested in pursuing. There is also a pressing need for more and better trained professionals in the field. This partnership allows us new opportunities to meet the needs of students and society.”

Grove City College’s growing online program gained a new leader in Dr. Christy L. Crute. She is spearheading the expansion of courses available online and for high school students via the dual enrollment program. Online and dual enrollment classes are convenient and affordable ways to earn college credits now, reducing the time it takes to graduate – and the cost.

“We know how busy life can be and want everyone to have access to the high-quality, Christ-centered education for which Grove City College is known,” Crute, director of Graduate and Online Education, said. “Students can get to work on a specific major or simply increase their knowledge and skill sets for work or self-improvement.”

The college’s graduation rate topped 84 percent in May, more than double the national four-year average. That statistic is part of a record that earned Grove City College recognition from U.S. News, which named it a top national liberal arts college and the least expensive private school in Pennsylvania, and The Princeton Review, which ranked the college’s career services office 12th in the nation in its annual “Best Colleges” guide.

Those rankings, along with other data – including a 96 percent success rate for employment or graduate school and above average starting and mid-career salaries – validate the college’s academic program, commitment to affordability and institutional values of faithfulness, excellence, community, stewardship and independence.

That success extends to athletics as the NCAA Division III varsity program embraced the “Wolverines Together” and “Brick-by-Brick” ethos in 2019, with football, soccer, volleyball, tennis and cross country squads among the teams posting winning seasons and earning individual honors.

The football team posted a 9-2 record, tying the single-season program record for wins, and hosted – and won – the ECAC James Lynah Bowl for the second year in a row.

The soccer teams had their inaugural seasons on a brand new artificial turf field in the revamped Don Lyle Soccer Field, named for the longtime coach and athletic director and made possible by generous donors. The women’s team won a conference championship and advanced to the NCAA Tournament for the second year in a row.

• The college invested more than $5 million in campus improvements. Grove City College fuels the regional and statewide economy, according to a 2019 report from the Association of Independent Colleges and Universities of Pennsylvania that found the College’s overall annual economic impact at $175 million.

• The college’s conservative think tank adopted a new name – The Institute for Faith & Freedom – to advance its mission and the founding ideals of American society.

• Alumni and friends generously supported the college, raising $1.5 million in a single day during the Wolverine Challenge. The money raised will be earmarked for scholarships and priority funding areas.

• A bronze statue of the college’s Wolverine mascot was installed outside the Physical Learning Center as a gift of the Class of 2019.

Grove City College (www.gcc.edu) is a highly ranked, national Christian liberal arts and sciences college that equips students to pursue their unique callings through an academically excellent and Christ-centered learning and living experience distinguished by a commitment to affordability and promotion of the Christian worldview, the foundations of a free society and the love of neighbor.

Established in 1876, the college is a pioneer in independent private education and accepts no federal funds. It offers students degrees in more than 60 majors on a picturesque 180-acre campus. Accredited by the Middle States Commission on Higher Education, Grove City College is routinely ranked as one of the country’s top colleges by U.S. News & World Report, The Princeton Review and others based on academic quality and superior outcomes.