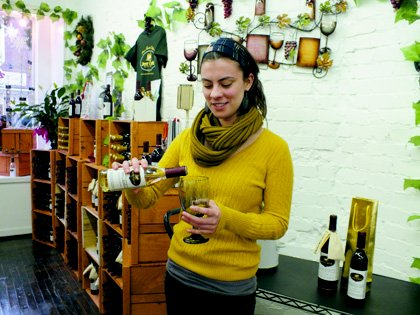 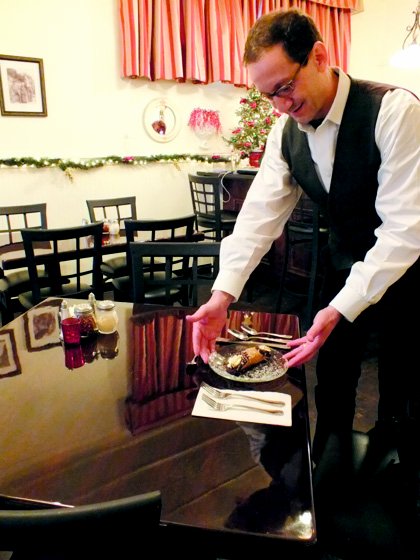 David Valenza, general manager of Nonni's Corner Trattoria in Olde Town Grove City, sets a table with one of the cannolis the restaurant has on hand for the large crowd they expect tonight for New Year's Eve.

David Valenza, general manager of Nonni's Corner Trattoria in Olde Town Grove City, sets a table with one of the cannolis the restaurant has on hand for the large crowd they expect tonight for New Year's Eve.

Those still making plans to ring in the new year tonight won't have to venture far to have a good time.

The shop has been doing well since its recent opening at 216 A S. Broad St. and people looking to toast 2012 with a glass of wine have made for a steady flow of customers.

Those sweeter wines that are flying off the shelves include Shippenville Red and Fryburg White. Deer Creek's mulled wine and four-bottle cases are also popular and make great hostess gifts, she said.

A few store fronts up and across the street at 251 S. Broad St. is Nonni's Corner Trattoria, a family-owned Italian restaurant that is always prepared for a lively weekend crowd.

"This is no exception," General Manager David Valenza said of the holiday weekend.

He and his sister Camille Valenza-Hazelton, who are Nonni's children, have been making sure there will be enough specialties to go around.

"It's mostly tradition to have pork as the first meal of the year," he said.

Nonni's will be open until 8 tonight and will have a strolling mandolinista playing music for guests. Reservations are recommended.

Some men might make the holiday more special by popping the question at the stroke of midnight, but it's been quite a few years since someone bought an engagement ring from Joden Jewelers with plans to propose over New Year's, said employee Jay Murawski, whose father Joe owns the store at 144 S. Broad St.

The jewelry business has slowed down because of the economy but Murawski said proposing over New Year's is a good idea to plan in advance since women don't expect gifts for that holiday.

With New Year's come resolutions to get fit and healthy, and Olde Town Grove is also home to Natural Options, 209 S. Broad St., which offers health and wellness products and services.

The HCG diet is a popular choice that includes homeopathic drops and consuming 800 calories a day, but any weight-loss plan is successful if you stick to it and change your lifestyle for the better, she said.

The weather forecast for the holiday weekend calls for some snow today with temperatures reaching about 40 degrees and dropping to 30 degrees, according to AccuWeather. New Year's Day will be cloudy but warmer with highs in the mid-40s and the low around 25 degrees.

Also, Pennsylvania State Police will be conducting roving patrols and sobriety checkpoints to try to remove impaired drivers from the roads.

Margaret "Peggy", 79, of Grove City. There will be no public viewing or funeral services. Should friends desire, contributions for medical and funeral expenses may be sent to the estate of Margaret Moore, 7625 Copper Glen St., Columbus, Ohio 43235. A private ceremony will be held at a later …