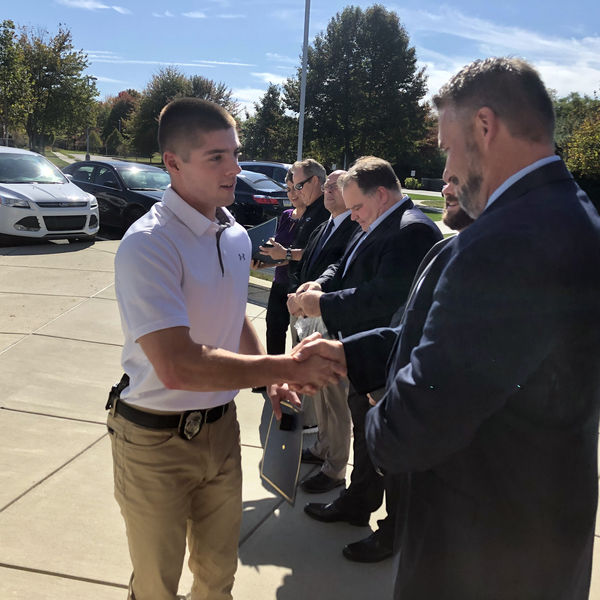 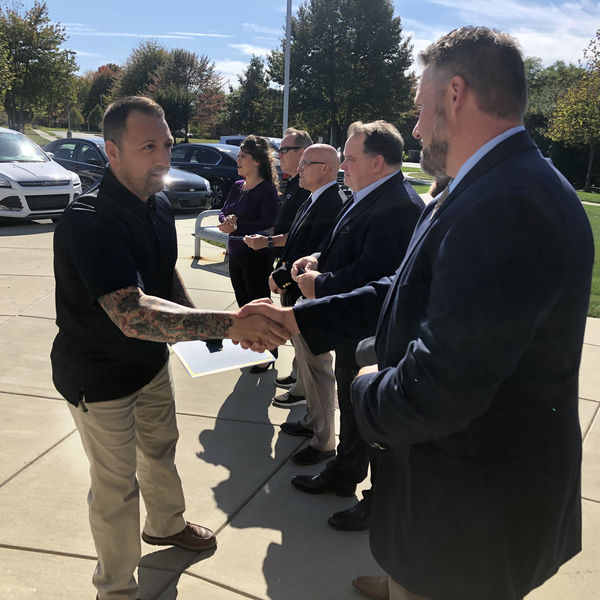 HERMITAGE – The police officers – Jesse DePietro of Grove City and William Caldwell of Greenville-West Salem – faced off with a sword-wielding teenager.

The 16-year-old boy, named Paul, had a toy sword. But he believed it was real. More to the point, Paul believed he needed that toy sword to defend against a very real danger.

“I’m a warrior,” he told the two officers. “A ninja dragon-fighting warrior.”

The officers engaged the boy in conversation.

Finally, the boy gave an indication that he would take the toy sword back inside, “now that you’re here to protect the roads,” he said.

But just when it seemed that the danger had been neutralized peacefully, something happened.

Laura Leskovac, lead instructor for Mercer County Crisis Intervention Team training, called the role-playing exercise to a halt Friday to end the program’s latest session. A few minutes later, DePietro and Crawford, along with 15 other police and parole officers, received their certificates of completion for the 40-hour training course.

The sword-wielding teenager emergency was no more real than the toy sword. “Paul” the teenager wasn’t real either. Bill Davis, an adult crisis worker for the Mercer County Behavioral Health Commission, portrayed the aspiring ninja.

But the exercise was based on a very real incident, just like all the other role playing exercises in CIT training.

“All of our role plays are based on real calls,” Leskovac said. “They just don’t identify anyone.”

With completion of this class, the fifth since the program began in the fall of 2017, more than 100 law enforcement officers have completed the crisis intervention team training.

During this week’s session, police officers heard from a range of speakers, including experts on mental health and autism.

Leskovac said the crisis intervention team training is supposed to provide police officers with an opportunity to walk in the shoes of people with mental illness, autism and people with suicidal thoughts. All too often, a police officer is the first person on scene at what is, in reality, a mental health medical emergency.

When that happens, Leskovac said an understanding of the subject’s ailment – an issue rarely taught in the police academy – is the only thing that prevents a tragedy, says Leskovac.

“Sometimes kids on the spectrum can seem defiant,” she said, giving one example.

DePietro said he was aware of the CIT program’s effectiveness even before he took the class.

“I had spoken with other officers and they spoke very highly of the program,” DePietro said. “It did exceed my expectations, though. It was very valuable.”

Sgt. Marc-Anthony Adamo, a Sharon police detective, said the opportunity to see a police encounter through the eyes of someone with autism or mental illness was particularly useful. As a detective, he said de-escalating a crisis calls on some of the same skills used in interrogating suspects.

“(We learned about) having empathy and putting yourself in the other person’s shoes,” Adamo said.

The first CIT training sessions were funded by the state Commission on Crime and Delinquency. This year’s two courses, one in the spring and the fall session that ended Friday, are paid for with a grant from the Buhl Regional Health Foundation.

The foundation renewed its grant last month, which will cover next year’s two training sessions.

Leskovac said the CIT certification program’s popularity among police chiefs and other law enforcement supervisors speaks for itself. If CIT didn’t enhance officers’ ability to do their jobs, she said they wouldn’t willingly allow their officers to be out of service, with pay, for an entire week.

“We’ve had several police chiefs trained and they go back and want the rest of their departments trained,” she said.

MEMBERS OF THE CLASS