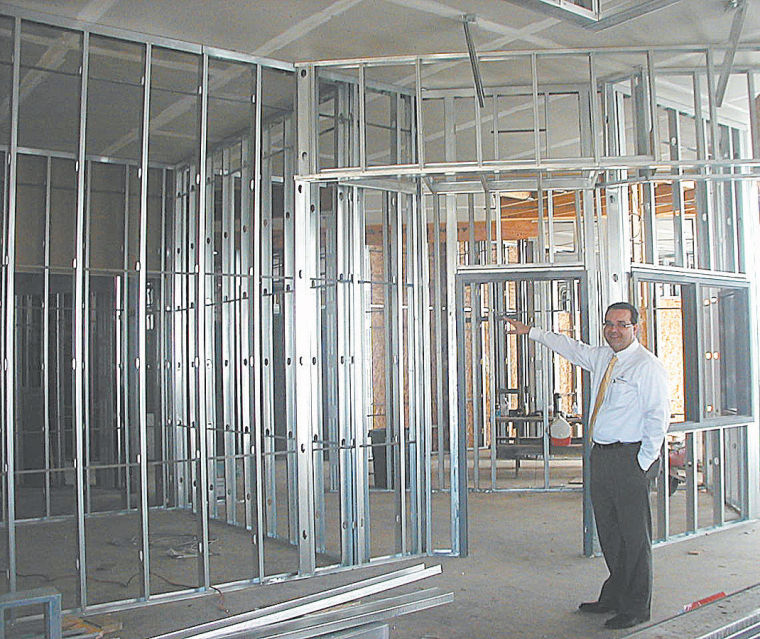 Jim Bird, George Junior Republic's director of development, gives a tour of the Pine Township facility's new academic center, which is now being built on campus. The facility is embarking on a campaign for funds to complete the structure.

A student at George Junior Republic, Pine Township, built this scale model of the facility's new academic center, which is now taking shape on campus.

Jim Bird, George Junior Republic's director of development, gives a tour of the Pine Township facility's new academic center, which is now being built on campus. The facility is embarking on a campaign for funds to complete the structure.

A student at George Junior Republic, Pine Township, built this scale model of the facility's new academic center, which is now taking shape on campus.

Academics is taking on a brand-new look at George Junior Republic.

The Pine Township facility for court-adjudicated boys will be getting a new school, and GJR is currently in a capital campaign to finance it.

“It will be a significantly better learning environment,” said Rick Losasso, CEO.

The school will replace the current educational facility, called Barnes School, which was built in 1947.

“Barnes School was named after one of the original founders, Morgan Barnes,” Losasso said. “Years ago, it was the center of our campus. Here we are 50 years later; it’s certainly not the center of campus any more.”

In 2008, an engineering study looked into the possibility of fixing up Barnes. It showed that an investment of nearly $2 million was needed to upgrade the electrical and HVAC systems, “and resolve plumbing issues,” Losasso said.

“The end result would not improve the overall physical design that includes inadequate classroom sizes, narrow hallways and low ceilings.”

Plus, Barnes is small, requiring classes to be held in three other academic buildings on campus, that GJR calls “school annex buildings,” Losasso stated.

Two of the buildings were residences originally; the other was formerly the infirmary. “Six years ago, we built a new infirmary,” he noted.

The annex buildings are being considered for recreation areas and a student union once the new school is built, Losasso said.

The new school was approved by George Junior’s board after they reviewed the 2008 engineering study.

At 62,000 square feet, it will be the centerpiece of the campus.

“This is not just a building for the moment but for the next century,” Bird said. “It has to be big.”

Construction on the new school began in the summer and continued during the winter months, since it was under roof by then, Losasso said.

The school is being built next to GJR’s vocational school in the field once used for soccer and track, Losasso added. Those sports have been relocated to an area behind the baseball field, he noted.

Besides using the sporting field to build the complex, two older residential facilities were razed in July to make room for the new academic center, Losasso said. “Both have been replaced with new state-of-the-art living units.”

Some local contractors working on the school include Thomas Construction, Pine Township; and Central Plumbing and Heating and Montgomery Truss & Panel, both Grove City.

Much of the school will be classrooms, and all students will be able to attend school in one building now. Currently, George Junior has 490 youths attending school, Losasso said.

“The kids won’t have to move from place to place,” Bird added. “This is cool.”

“It’s a lot better to have everyone under one roof, that’s for sure,” Losasso said.

The library, which is in one of the annex buildings, would be put in the new school as well, he noted.

The school will cost $11 million, which GJR has secured with a bank loan. About $811,000 has been raised toward the balance, Bird said. That includes a $200,000 donation from an outside foundation, Losasso added.

“Other moneys have come from the George Junior Republic family, which would include board of directors and staff. There’s a government grant in hand that’s in the very, very early stages,” Losasso noted.

“We’re ready to venture into (approaching) corporations and foundations, which have been very generous in the past.”

Being in the early stages of a capital campaign, naming rights for the new school is yet to be determined, he added.

“People are making conscious choices in giving funds,” said Bird, who is involved with fundraising as director of development. “I really believe George Junior has a compelling story. We’re setting up kids for success.”

Barnes School is expected to be razed. “It’s just not functional,” Losasso stated, since it will still need all the upgrades cited in the 2008 study.

Two additions onto Barnes over the past 15 years may be kept, however.

“We have a number of options (for the additions), but we haven’t finalized exactly what we would do there,” Losasso said. It’s possible that the additions could be razed as well.

“We would probably not rebuild (at Barnes),” he added.

The new school has been needed for several years. “At about 2004 or 2005, we really started to think at some point we’d have to do this,” Losasso noted.

“We may have some youth strictly on academic track. Younger youth may not be eligible for vocational education. You have a number in special needs programs that don’t go to vocational school as well,” Losasso said.

Thirty-one youths who live in five community group homes owned by George Junior attend regular school. One of those homes is on East Main Street in Grove City.

“We’ve been on that site for probably 30 years,” Losasso said.

“They have to work through the system. They are usually youth that are with us for a longer period of stay, mostly due to no structure in their own home; maybe no parents.”

Having another new home for education is exciting. The school is expected to be complete around Thanksgiving, Losasso said.

“We’re anxious to get in there, and I know (the teachers) are very excited.”

As the huge building takes shape, the boys are asking, “‘Are you building this for us,’“ Bird added. “I say, ‘Yes, you deserve it. You deserve a good education.’“