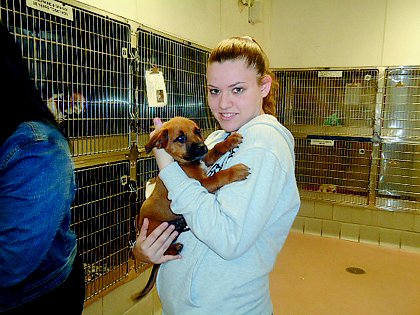 Mikayla Thompson, 15, of Mercer, who has epilepsy, cuddles with Fred, a puppy she befriended at the Society for the Prevention of Cruelty to Animals of Texas. Make-A-Wish granted her request to visit the facility. 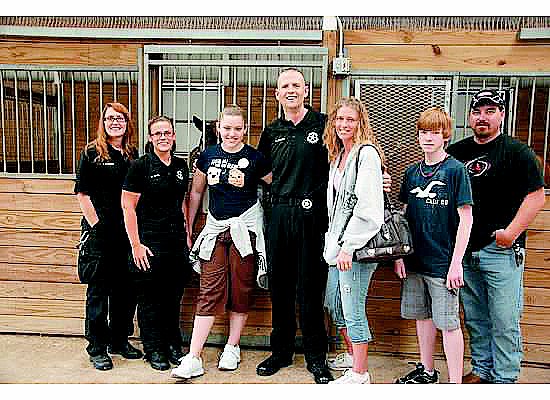 Mikayla and her family got to meet investigators from her favorite show, "Animal Cops: Houston." From left are Shawna Sundberg and Megan Leger, Mikayla, Charles Jantzen, Sonya Thompson, Derrick Thompson and Scott Malone.

Mikayla Thompson, 15, of Mercer, who has epilepsy, cuddles with Fred, a puppy she befriended at the Society for the Prevention of Cruelty to Animals of Texas. Make-A-Wish granted her request to visit the facility.

Mikayla and her family got to meet investigators from her favorite show, "Animal Cops: Houston." From left are Shawna Sundberg and Megan Leger, Mikayla, Charles Jantzen, Sonya Thompson, Derrick Thompson and Scott Malone.

It didn't take long for Mikayla Thompson to figure how she wanted to fulfill her Make-A-Wish request.

"They've inspired me," the 15-year-old Mercer girl said about her recent trip to Houston to visit the Society for the Prevention of Cruelty to Animals of Texas.

While some teens in her position might choose an amusement park or ask to meet a celebrity, Mikayla, who has epilepsy, wanted to spend time with people making a difference in the animal world, something she hopes to turn into a career by becoming a veterinarian. "I just have a really good connection (with animals)," she said.

Mikayla, a freshman at Mercer High School, helps take care of the family cat, Reesie, which keeps her mind off of her condition. She was diagnosed with epilepsy about four years ago after an incident at home, her mother Sonya Thompson said.

Mikayla was diagnosed about two months later and has had about a dozen seizures since then. She takes 10 pills and vitamins a day and some of them make her tired.

Her doctors, including Dr. Bilal Sitwat, a neurologist with Children's Pittsburgh Hospital who visits Hermitage to see patients, have advised her to never spend time alone.

"They have no clue what sets her off," Thompson said, adding Mikayla never remembers anything about her seizures, which leave her very disoriented. But that doesn't weigh heavily on Mikayla, who has the support of family, friends and even the teachers at school, where Thompson works in the cafeteria.

"You have to live your normal life. My friends know what to look for," Mikayla said of her condition.

She loves reading, hanging out with her friends and listening to music and has a few favorite television shows, including "Animal Cops: Houston" on Animal Planet.

When she turned in her Make-A-Wish application, she crossed her fingers that her request would be approved. The investigators featured on the show are based out of the SPCA facility in Houston, which also has a wildlife center, rescue and adoption services and farm animals.

"You're not alone in your opinions," Mikayla said of spending time with professionals who love animals as much as she does, especially her favorite, horses; she met one at SPCA named Magnum, who took a liking to her.

Her family of four was in Houston from April 3 through 6, and the trip was Mikayla's first time on an airplane, an experience she enjoyed.

She got a behind-the-scenes look on what goes on at the SPCA, from veterinary care and adoption services to rescued farm animals and wildlife creatures that needed a home after a zoo had closed.

The family witnessed a woman surrendering her three dogs and while they didn't know her situation, it was still sad to watch, Mikayla said. Animal cruelty laws kept them from learning about specific cases, but Mikayla got to meet her favorite investigator from "Animal Cops," Charles Jantzen.

That was fun but she was surprised to see cats and dogs rescued on the show still waiting to be adopted from SPCA.

"But I was happy to see them healthy," Mikayla said.

One of the highlights of Mikayla's visit was a puppy named Fred she wanted to adopt from the SPCA. Unfortunately, the apartment where she lives allows only one pet per family. She has plenty of photos of Fred, along with a T-shirt she had autographed by everyone she met at SPCA. Mikayla plans to look into volunteering with a local animal rescue and adoption agency.

Make-A-Wish took care of everything for the family, including spending money for meals and sight-seeing and a stay at the Omni Houston Hotel, she said.

When the hotel found out the nonprofit organization made the arrangements, they upgraded the family's room to one that had a suite for Mikayla and Derrick, complete with a mini-basketball court, chalkboard wall, flat-screen television, a Wii video-game system and "a lot of cookies."

"I think it's a great organization," Thompson said, adding she enjoyed meeting with Make-A-Wish volunteers, including Cory McClearn Myers of Mercer, who visited their home several times.

Make-A-Wish grants wishes to children with life-threatening medical conditions ages 2½ to 18. It is a common misconception that only dying children are eligible; nearly 80 percent of the wish recipients are still alive, according to a news release issued by Make-A-Wish Greater Pennsylvania and Southern West Virginia, which has a regional office in Erie.

"The Foundation believes that a wish is an experience that fills children and their families with a feeling of hope and invigorates them with a joy for living," the release said.

This particular chapter is one of the most active ones in the country, having granted more than 13,000 wishes.