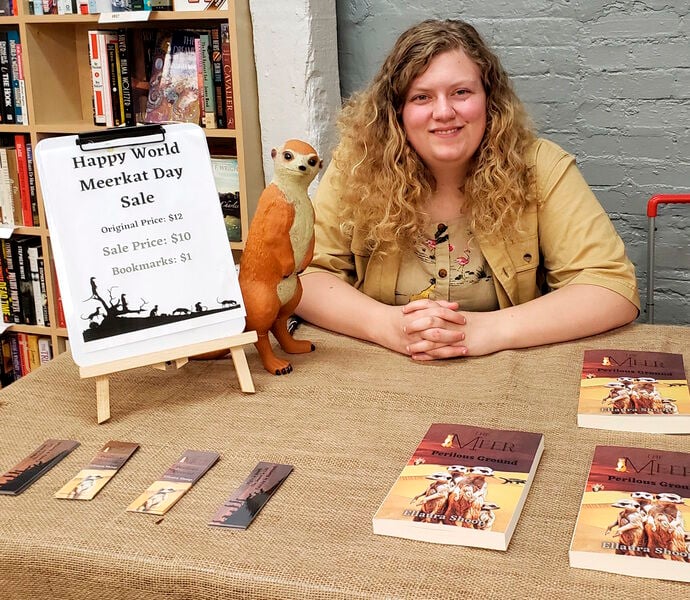 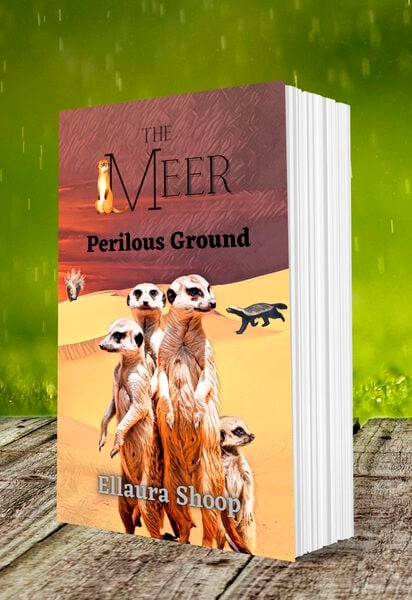 “The Meer: Perilous Ground” is the first book in a series published by Ellaura Shoop of Grove City.

“The Meer: Perilous Ground” is the first book in a series published by Ellaura Shoop of Grove City.

GROVE CITY – Ellaura Shoop has combined her love of meerkats and writing to publish the first in a series of fictional books about the South African creatures.

“It reminds me of a human family,” she said of the hierarchy that meerkats follow.

The 21-year-old Grove City woman has been sharing “The Meer: Perilous Ground” with the community by giving readings at book-signing events and said the feedback has been great.

She already visited Mr. Bookman in Franklin, and she’ll be at Keystone Safari in Liberty Township from 10 a.m. to 3 p.m. July 18, followed by a stop at Slippery Rock Community Library at 6 p.m. July 22.

The series is aimed at middle-school-aged students, and it focuses on family values and relationships, covering multiple generations of meerkat families.

The first book is a collection of short stories that serves as an introduction to the different members of Shoop’s imagined meerkat families as they live through triumphs and tragedies in the desert.

The book starts with a legend that will be mentioned throughout the series, and it describes Star, a young meerkat raised by a cobra after being abandoned by his mother.

It’s been exciting for Shoop and her loved ones to see the book come to life after years of hard work.

She thought about studying to become an animal behaviorist, but decided to write about them instead, often sharing her tales with her late aunt, Joann McCormick.

“I still have the notebook... I think she’d be really proud,” Shoop said.

Shoop and her family – parents Karen and Paul and younger brother Paul – are fans of “Meerkat Manor,” a popular Animal Planet show that follows a meerkat family in the Kalahari Desert.

She was about 7 when they first started watching, taking great interest in how they work together in family units.

Her great-aunt, the late Delores Uncapher, who also loved meerkats, knitted scarves for Shoop’s stuffed meerkats, so it only seemed natural for Shoop to create her own meerkat family.

Shoop’s first book was years in the making, and she wasn’t sure if it would ever get published, but she squeezed it into her busy schedule.

The self-published author works in Butler as a caregiver and graduated from Butler County Community College in December with associate’s degrees in English and psychology. She also has two dogs, two cats and two guinea pigs.

Encouragement from those close to her keeps her doing, and she’s inspired by one of her favorite authors, Erin Hunter, known for the “Warrior Cats” series.

Terri Finamore, Shoop’s psychology professor from BC3’s LindenPointe campus in Hermitage, has been a great mentor.

Shoop studied psychology to help her have a better understanding of character development, and “The Meer: Perilous Ground” is dedicated to Finamore.

Another great mentor is Linda Gerber, who used to run a writing club at Grove City Community Library, where they met.

Gerber has also worked as an editor and inspired Shoop to be herself, how to accept constructive criticism and how to “trim the fat” while writing.

“I just read over it as many times as I could,” Shoop said, adding that her mother also reads her writing.

The “read aloud” function on Microsoft Word was also helpful in catching errors, and it feels really good to be able to hold the book in her hands.

Writing helped Shoop make it through the COVID-19 pandemic shutdown, and she’s very happy with how it turned out.

She believes that adults will also like the book, and she hopes that it gives readers a feeling of hope and belonging.

Shoop drew the book’s cover along with the illustrations, and she is aiming for the main series to have seven books.

The first book is available on Amazon, and the second book, “Blaze,” was just released as an e-book, also on Amazon. A hardback version will be available in a few weeks.

Shoop’s goal is to make a career out of writing. She’d be interested in writing non-fiction about meerkats since she has spent so much time researching them.

“I know a lot of facts by heart now,” she said.

She encourages other writers to read a lot of books that are similar to the subject matter they’re focusing on, but to make it their own.

“The personality of every project is different,” Shoop said.

For more information about Shoop and her books, visit www.themeerseries.com or her author page on Amazon.