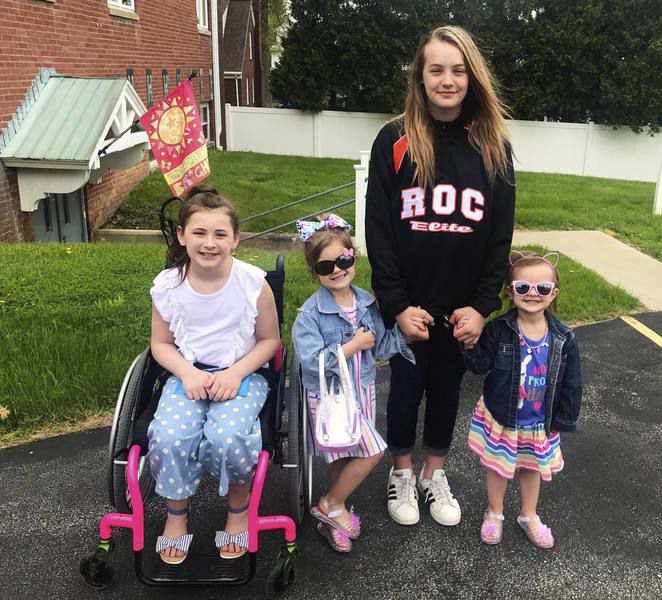 ContributedSupporters of Brynn Adams, a 10-year-old Grove City girl who has been diagnosed with a rare neurological disorder, will hold a luau fundraiser May 18 in Pine Township. Brynn, left, is with her sisters, Addie, Kailyn and Maddie. 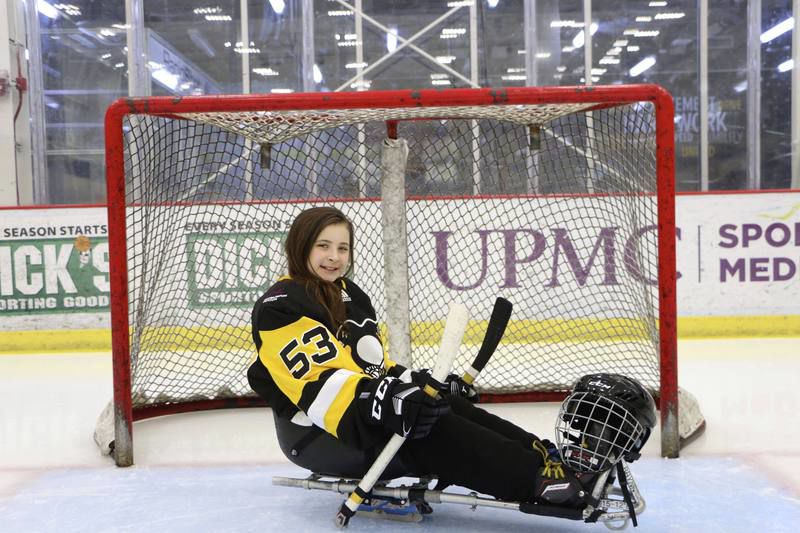 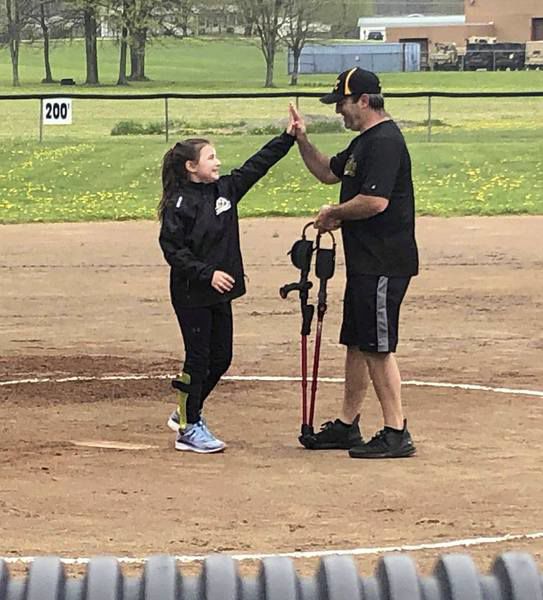 ContributedBrynn Adams, left, who loves softball, gets a high-five from her father Chris Adams at the first game of the season for the Grove City Girls fast-pitch softball team. She threw out the first pitch of the season. She has had to take a break from playing because of a rare neurological disorder.

ContributedSupporters of Brynn Adams, a 10-year-old Grove City girl who has been diagnosed with a rare neurological disorder, will hold a luau fundraiser May 18 in Pine Township. Brynn, left, is with her sisters, Addie, Kailyn and Maddie.

ContributedBrynn Adams, left, who loves softball, gets a high-five from her father Chris Adams at the first game of the season for the Grove City Girls fast-pitch softball team. She threw out the first pitch of the season. She has had to take a break from playing because of a rare neurological disorder.

PINE TOWNSHIP – The Grove City area community has been rallying around Brynn Adams as she deals with a rare neurological disorder, and her family is very grateful.

“So many people coming together to help our sweet girl and lift us up has made life less difficult in a very trying time,” said her mother, Allie Adams.

The Grove City family is looking forward to this Saturday’s Hawaiian luau fundraiser, which will help the family with Brynn’s medical costs and the purchase of a vehicle that can accommodate her wheelchair.

“Brynn is so excited to see everyone,” Mrs. Adams said.

The event is set for 2 p.m. May 18 at Pine Township Engine Company, 1252 S. Center St., Pine Township. Admission is $10. There will be food from Norm’s Mule Train Smokers, music by Treebeard Brown, a basket auction, 50/50 raffle, games, and activities.

Brynn, who recently celebrated her 10th birthday, was diagnosed in October with hereditary spastic paraparesis, or HSP, a progressive disease that is linked to a genetic mutation.

The diagnosis came after years of health issues, and she sometimes has trouble walking and tires easily because of muscle weakness and pain.

She has had to stop playing softball, and she is in cyberschool, but her parents say she is a “tough kid.” Chris and Allie Adams have three other daughters, Kailyn, Addie and Maddie, and Mrs. Adams owns Allie’s Sweet Tooth, a bakery in Grove City.

Brynn has had injections in her lower leg muscles to help with spams and pain, but there has been little relief so far. More injections are planned.

She is inspiring and hopeful, and she has been enjoying activities like sled hockey – players are strapped to sleds, and they move around the ice rink with their arms.

The Mighty Penguins sled hockey program plays and practices at the UPMC Lemieux Sports Complex in Cranberry Township. Brynn has made friends with one of her teammates who also has HSP.

“They have become great friends and support for each other,” said Mrs. Adams, who shares updates on the “Brynn’s Bullpen” Facebook page.

Friendship and support has been so important, and the fundraiser is one of the kindest and most selfless acts the family has experienced, she said.

They are thankful for all of the prayers, love, help with meals, text messages, phone calls, housework, and more.

The fundraiser has a luau theme because Brynn would love to visit Hawaii someday. She loves music and loves to dance, and she hopes to be able to dance at the luau now that she has new braces for her legs.

“The community pulled together,” Bev Bell said of the volunteers who have made the luau possible.

When Bell first heard Brynn’s story, the Grove City woman knew she wanted to help. Her daughter, Sara, who was diagnosed with a genetic disease called metachromatic leukodystrophy at the age of 3, and died in 2006 when she was 13.

“My heart went out to her,” Bell said of Brynn.

Bell, who works as a pediatric nurse and is helping organize the event, said that it’s important for community members to reach out and let the Adams family know that there are people who care.

“I just see the love that they have for their children,” she said.

The luau will have food, music and door prizes. Volunteers have collected about 100 baskets for the auction; items have been donated by businesses and individuals and include gift certificates and more.

There will also be a beer wagon starting at 5 p.m., and a photo booth with a Hawaiian theme.

Anyone who wants to help can donate baskets for the auction, Hawaiian desserts, paper plates, and monetary contributions. Call Bell at 724-372-0839 for more information.

Luau tickets can be purchased at the door; at DuraEdge, 149 S. Broad St., Grove City; or online by visiting the “Hawaiian Luau Fundraiser For Brynn” Facebook page.

She added that Brynn celebrated her 10th birthday with her softball teammates on their opening day, and she got to throw out the season’s ceremonial first pitch.

And that won’t be her first ceremonial toss.

Brynn is scheduled to throw out the first pitch before the Pirates game against the Los Angeles Dodgers Friday, May 24. The game starts at 7:05 p.m., and the family has arranged for a bus to travel to Pittsburgh.

Tickets are specially priced at $29 in the outfield box section 128, and $10 from each ticket will support Brynn.

For more information about the game, contact Jordan Woyt at 412-325-4761 or jordan.woyt@pirates.com