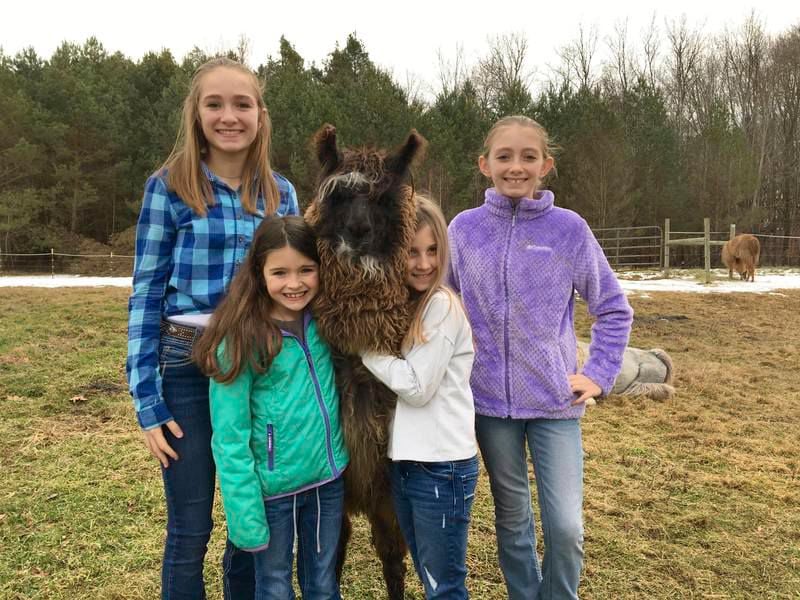 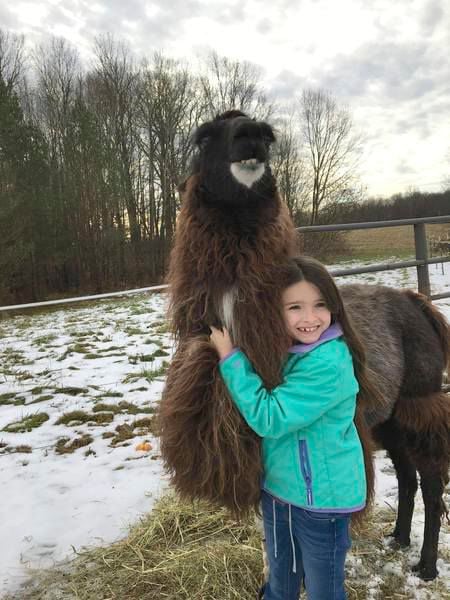 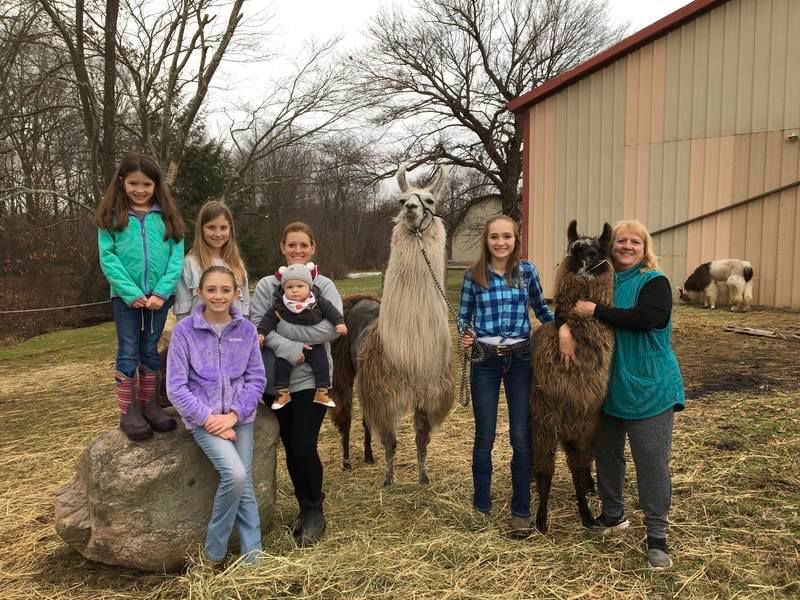 Members of the Marsteller family hang out with some of their alpacas. Seated is Leigha Marsteller. Standing, from left, are Alexa Marsteller, Lilly Grace Maynard, Rachelle Marsteller with baby Gavin, Victory, Emma Marsteller, War Paint, and Maryanne Stein. The three Marsteller sisters care for and show llamas. 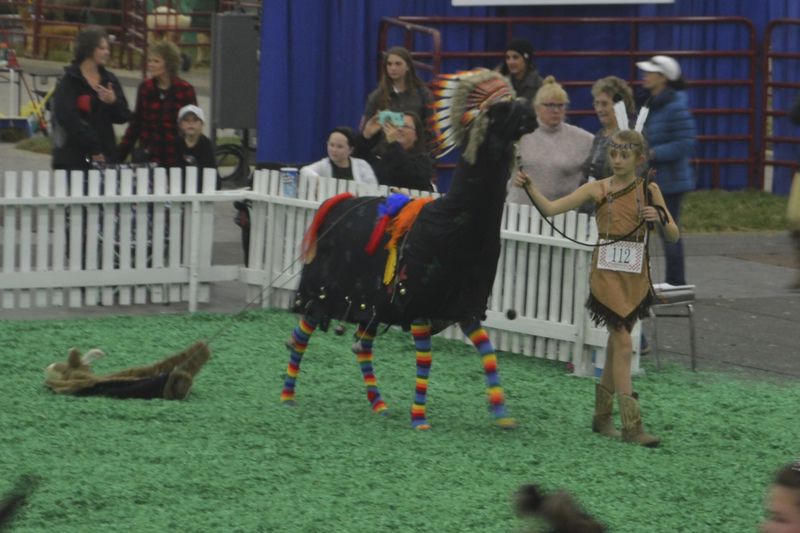 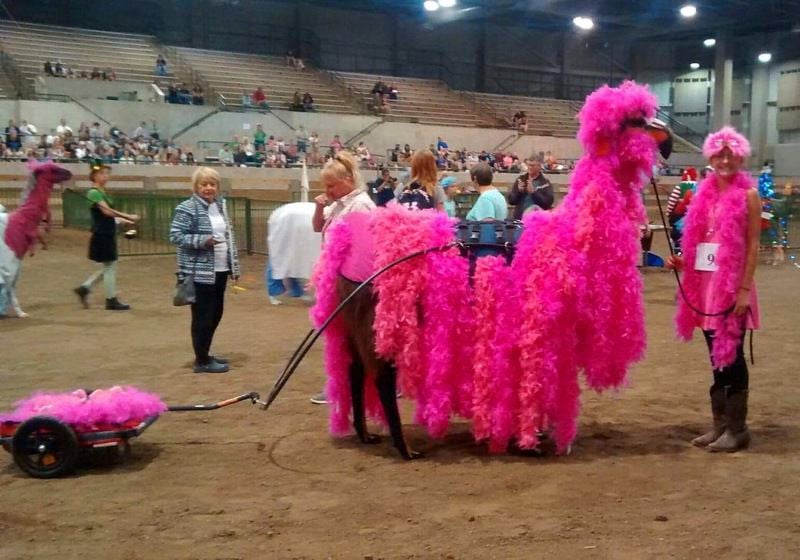 Members of the Marsteller family hang out with some of their alpacas. Seated is Leigha Marsteller. Standing, from left, are Alexa Marsteller, Lilly Grace Maynard, Rachelle Marsteller with baby Gavin, Victory, Emma Marsteller, War Paint, and Maryanne Stein. The three Marsteller sisters care for and show llamas.

Leigha and her sisters Emma, 14, and Alexa, 7, care for and show the llamas that live on their 26-acre farm in Mill Creek Township.

The llamas came running over to the gate Thursday afternoon as soon as they saw the three sisters.

They were joined by their mother Rachelle Marsteller; their brother Gavin, 8 months; their grandmother and Marsteller’s mother Maryanne Stein; and their cousin Lilly Maynard, 9. Their father Travis also lives at the farm.

The three sisters, who attend Lakeview schools, help look after the animals of Absolutely Alpacas and Llamas.

There are alpacas and llamas at the Marsteller farm, and at Stein’s Mercer farm.

Stein owns the business and encouraged the girls to learn more about taking care of the animals.

It wasn’t long before the girls took over a lot of the chores and started winning awards for showing llamas.

“It’s amazing,” Stein said of their hard work and dedication.

Emma won the champion title during the Annual Llama Costume Contest at the North American International Livestock Exposition that was held in November in Louisville, Ky.

Participants were judged on the creativity and design of the costumes. Emma dressed up Victory as a flamingo, complete with a headpiece and lots of bright pink feathers.

Victory also pulled a cart of baby flamingos, which took a lot of practice, Emma said.

Leigha dressed up Pthalo Blu with a Native American outfit that included a bow and arrow.

“We had every square inch of their bodies covered except their eyes,” Stein said of the contest rules.

The girls said they enjoy traveling and making new friends, and they love taking care of their furry family members. They also have two dogs, Wilson and Bear Bear, and three cats, Canter, Pie Pie and Pepe.

They’ve learned how to provide medical care to the animals with adult supervision, and they never complain about having to do chores early in the morning, late at night, or in inclement weather, Marsteller said.

“A life depends on you,” Emma said of the importance of their roles.

The girls are becoming more responsible in learning how to budget their time; it’s an educational experience, Marsteller and Stein said.

Leigha is learning about judging llama shows, and she’d like to run a farm someday. Emma wants to work as a veterinarian, teacher or physical therapist.

Both girls play basketball and volleyball, Emma loves to read, and Leigha enjoys dancing and contortions.

Alexa likes sharing facts about llamas and joking about how their ears look like bananas.

“And they have three stomachs,” she said.

Emma noted that each llama has a different personality, and they are all very friendly, like really big dogs.

“We call her ‘boss baby,’” she said of Genteel Pride.

Victory acts like “the queen,” War Paint can be grouchy, and Hazelnut is the “class clown,” the girls said.

The girls’ bedroom walls are filling up with medals, ribbons and banners from their successful shows.

They’re looking forward to a llama show in May, and the family is hoping to host summer llama walks with lunch in the woods behind the Marsteller home.