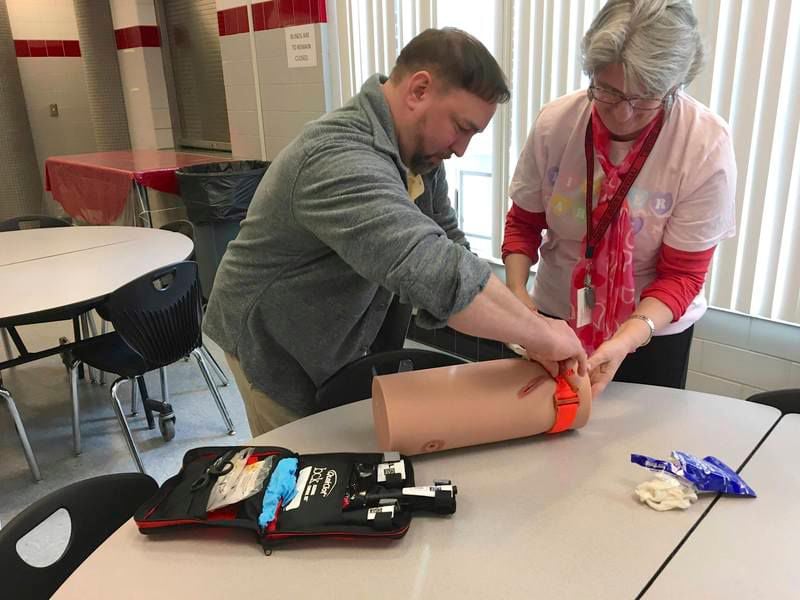 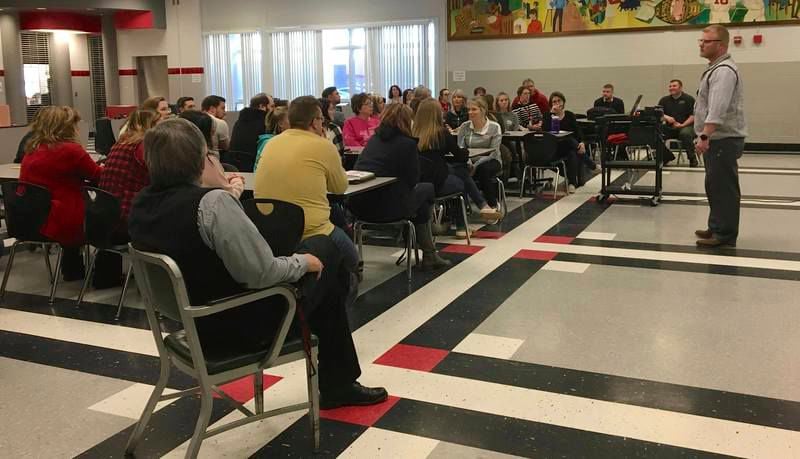 Ben Hart, an EMS specialist with UPMC Northwest, gave a “Stop the Bleed” presentation on Friday to Lakeview School District staff and faculty. 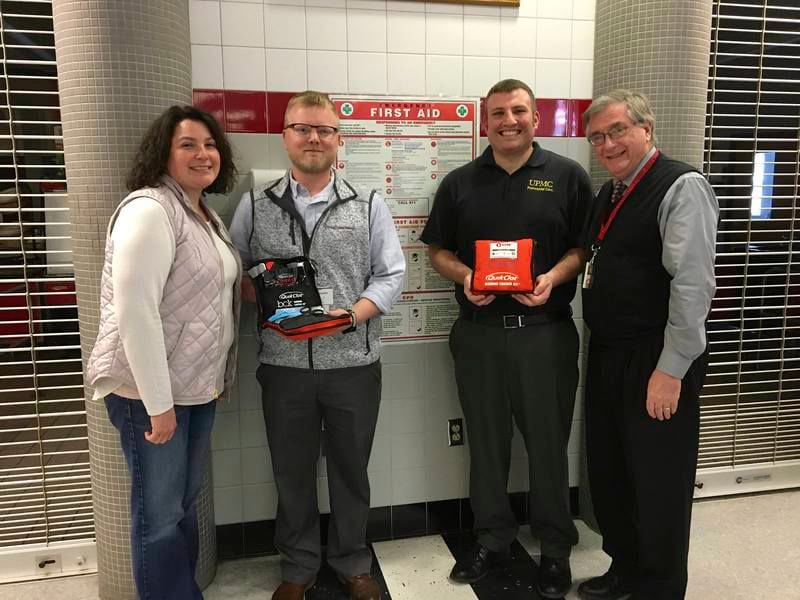 Ben Hart, an EMS specialist with UPMC Northwest, gave a “Stop the Bleed” presentation on Friday to Lakeview School District staff and faculty.

About 100 employees at Lakeview School District spent an in-service day learning about how to handle injuries and accidents that result in serious blood loss.

“First and foremost, we have to ensure our own safety,” Ben Hart said on Friday afternoon in the high school cafeteria.

He reviewed the “ABCs” of “Stop the Bleed,” which Rozic said is a program that is funded by a $1.3 million grant from UPMC.

“B” is for “bleeding.” If it doesn’t get under control, it could lead to a loss of life. Tourniquets are recommended, but if the wound is located in an area that can’t be wrapped, apply pressure with gauze or cloth, Hart said.

“C” stands for “compression.” Hold pressure on the wound for 10 minutes.

Hart explained the tourniquet and other items contained in the four trauma kits that UPMC gave to the school.

Tourniquets are designed to shut off the blood flow, and can do so for up to 12 hours.

The kit features the Combat Application Tourniquet, which can be applied with one hand.

“I’ve done with this with 7-year-olds,” Hart said of the training.

He added that the pressure applied by the tourniquet often hurts more than the injury itself.

If no tourniquet is available, pack the wound with gauze. The gauze included with the kits have a clotting agent and a blue strip that shows up on X-rays, showing how deep the wound is.

Always look for secondary injuries, like the exit wound for a gunshot injury, he said.

And pack the gauze tight, putting pressure on the veins and wound until medical responders are able to take over.

“This is one of the most important slides,” Hart said of the presentation.

If a tourniquet is too big for a child, use your hand to apply pressure.

“The only thing more tragic than a death is a death that could have been prevented,” he said of hemorrhage control.

Lakeview Superintendent Dr. Hendley Hoge pointed out that while the presentation shows people wearing gloves, they may not always be available.

UPMC started “Stop the Bleed” about four years ago as an initiative to train law enforcement who respond to incidents where someone is experiencing heavy bleeding, Rozic said.

Eventually, UPMC would like to put the trauma kits in as many public schools as possible, and they want to extend the training to private schools, colleges and universities.

So far, UPMC has given more than 1,000 kits to area schools.

“We’re above 60,000 people in the region,” Rozic said of the number of people who have been trained.

The school will need to tell UPMC where the kits will be located, which is good information to have on file in case of an emergency.

“You guys took initiative,” he told the crowd.

“Stop the Bleed,” which has also visited Jamestown and Sharon schools, is a great tool, several Lakeview teachers agreed after the presentation.

Shawnee Wood, who teaches kindergarten and is president of the teachers’ union, and Adam Kemmerling, an art teacher, were practicing with gauze and a tourniquet from one of the kits.

They are already certified in CPR and AED training, and they were glad to have the opportunity to learn more about hemorrhage control.

“The limb can survive without blood,” Wood said of what she learned on Friday.

They recommend that other school officials consider bringing “Stop the Bleed” to their staff and faculty.

The kits will be close to the AED devices already located around the district, Wood and Kemmerling said.

The district is located in a rural area, so it can take a while for an ambulance to reach the school if needed.

It’s great that the staff and faculty can be more prepared, she said.

Hart said he’s received great feedback, including stories from people who used the training they learned from “Stop the Bleed.”

“There’s been a lot of success stories,” Rozic said.

One man told Hart that the training taught him how to use a tourniquet, which he employed during a hunting accident.

Angela Grimm, a certified nurse for the whole school district, said that Hoge understands the importance of bringing this kind of training to staff and faculty.

“It’s always good to refresh on the things,” she said.

For more information about “Stop the Bleed” or to set up a training session, contact your local UPMC facility, or visit stopthebleedtoday.com