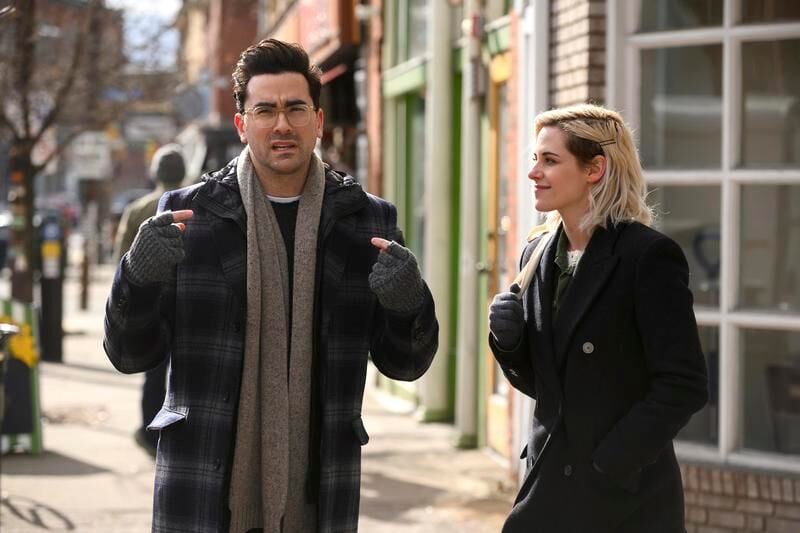 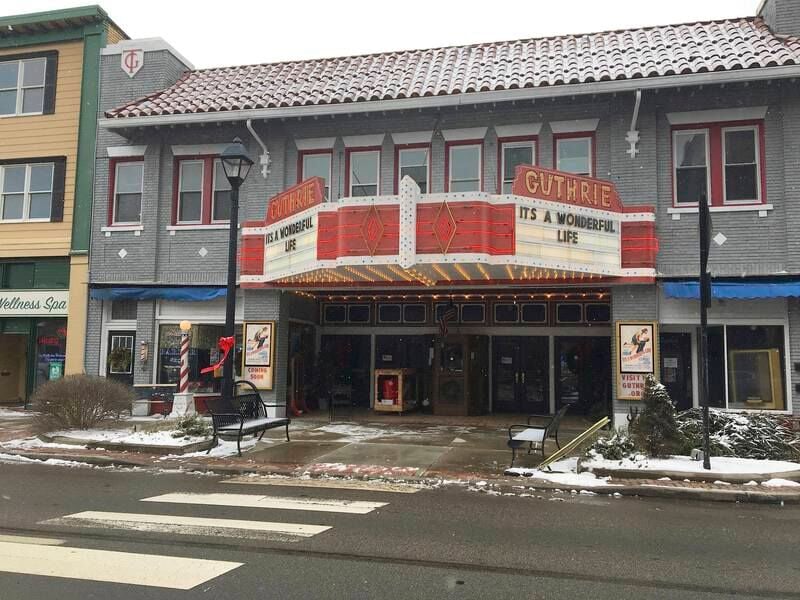 "Happiest Season," which is released today, Nov. 25, on Hulu, filmed a scene in Grove City earlier this year. This photo from Feb. 27 shows how the marquee and posters outside the Guthrie Theatre were changed to show "It's a Wonderful Life." The scene included Nonni's Corner Trattoria across the street. 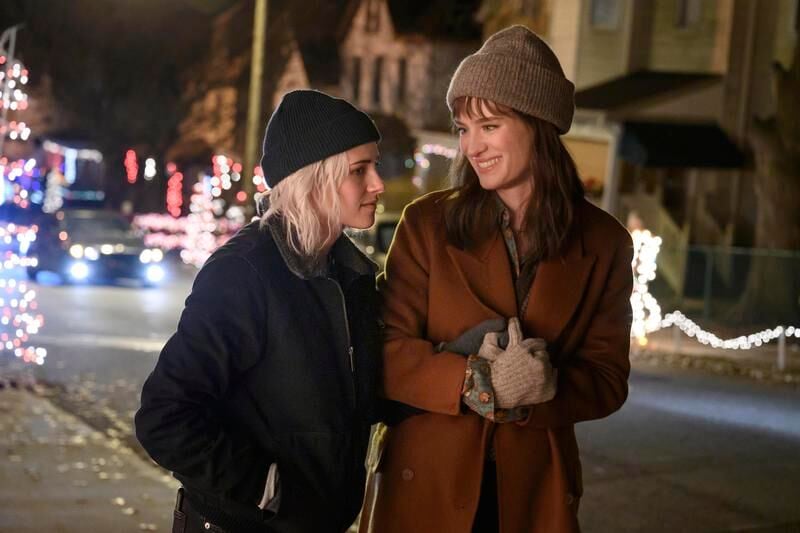 Kristen Stewart, left, and Mackenzie Davis play a couple going home for the holidays in “Happiest Season,” which filmed a scene in Grove City.

"Happiest Season," which is released today, Nov. 25, on Hulu, filmed a scene in Grove City earlier this year. This photo from Feb. 27 shows how the marquee and posters outside the Guthrie Theatre were changed to show "It's a Wonderful Life." The scene included Nonni's Corner Trattoria across the street.

Kristen Stewart, left, and Mackenzie Davis play a couple going home for the holidays in “Happiest Season,” which filmed a scene in Grove City.

GROVE CITY – The Christmas movie that filmed a scene in Grove City earlier this year is coming to a television or computer screen near you.

The romantic comedy starring Kristen Stewart was initially set for a theatrical release this month, but with many theaters closed because of the COVID-19 pandemic, Hulu ended up acquiring the rights.

The PG-13 movie follows Stewart, who plays Abby, and her girlfriend Harper, played by Mackenzie Davis, as they navigate the ups and downs of the holiday season.

Abby is preparing to meet Harper’s family for the first time at an annual Christmas dinner, and Abby is planning to propose – until she realizes that Harper has not told her family that she is gay.

“‘Happiest Season’ is a holiday romantic comedy that hilariously captures the range of emotions tied to wanting your family’s acceptance, being true to yourself, and trying not to ruin Christmas,’” according to Hulu’s press kit.

Most of the movie was filmed in the Pittsburgh area. On Feb. 27, film crews came to Grove City, where Stewart shot scenes at Nonni’s Corner Trattoria restaurant and the Guthrie Theatre, both located on South Broad Street in Olde Town Grove City.

The road was shut down that afternoon and late into the night. It was very cold, and since it didn’t snow, crews produced some of the white stuff, turning Olde Town into a winter wonderland complete with Christmas decorations.

Some onlookers stopped by to see if they could catch a glimpse of Stewart, who is best known for the “Twilight” vampire movie series.

Extras included local residents, and the owners of Nonni’s and the Guthrie were excited to be part of the project.

Lisa Pritchard, manager of Olde Town Grove City, said on Monday that she’s excited to see “our beautiful little town” being featured in a major film.

“A Christmas movie is the perfect match for our community,” she said.

Already getting positive reviews from the critics, the movie is directed by Clea DuVall, who also did the story.

DuVall told Hulu that she chose the Pittsburgh area to take advantage of the gifts it has to offer.

Stewart told Hulu that “Happiest Season” is heartwarming, slightly stressful and manic because that’s what Christmas feels like.

“I do love Christmas – it’s just that it can be a complicated time,” she said in the production notes.

DuVall, an actress who has been in films including “Argo” and “Girl, Interrupted,” plus a number of TV shows, told Hulu that with “Happiest Season,” she’s telling a more inclusive story.

It’s the first major studio holiday movie that focuses on an LGBTQ couple, and as part of that community, DuVall said she was prepared to tell “a more universal story from a different perspective.”

Hulu notes that Stewart is also part of the LGBTQ community and Davis has been in LGBTQ content, lending an authenticity to their performances, DuVall said.

DuVall added that the character of Harper was afraid to come out to her parents Tipper and Ted, played by Steenburgen and Garber, because they are “very specific kinds of old-fashioned and traditional.”

Hulu says that the “final piece of the puzzle” is Abby’s best friend John, played by Levy, who recently won a record number of Emmy Awards for his work on Netflix’s “Schitt’s Creek.”

Levy told Hulu that a holiday movie featuring LGBTQ characters takes an expansive view toward the meaning of family. A lot of people, especially the LGBTQ community, don’t have supportive families, so they turn to friends, he said.

“This movie does a really lovely job of marrying ​family​ and ​found family​, and celebrating both,” he said.

For more about “Happiest Season,” visit the film’s official Facebook page or hulu.com

Dennis S. Burnham, 78, of Grove City, Pa., formerly of Conneaut-ville, passed away April 18, 2021. He was a travel agent traveling to all corners of the globe. A memorial service will be scheduled for a later date.

Malcolm D., 77, of Millbrook. As per Malcolm's wishes, there will be no services. Funeral arrangements have been entrusted to ROSE and BLACK FUNERAL HOME and CREMATORY Inc., Stoneboro and Sandy Lake. Online condolences may be sent to the family by visiting www.RoseAndBlackFH.com