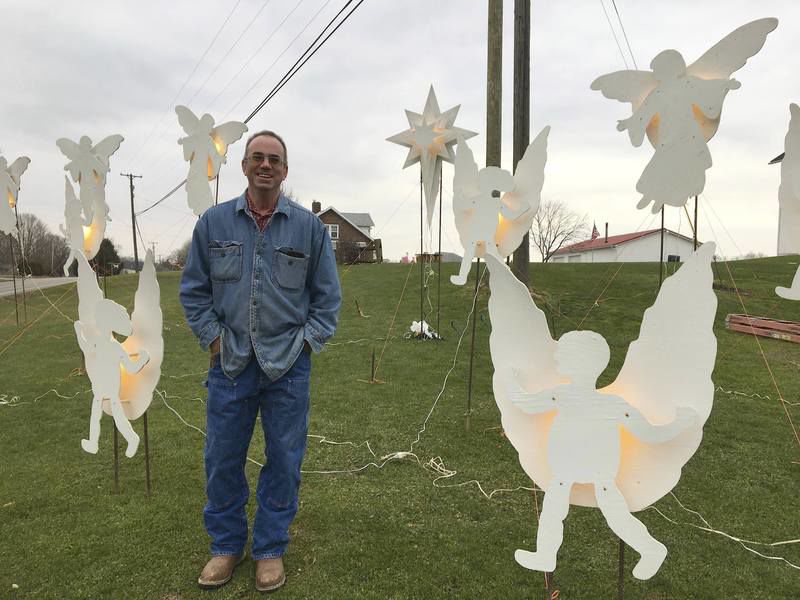 Ed Stoner created this display of angels in 2012 to honor the 26 students and teachers killed in the Sandy Hook Elementary School shooting. The display is located on state Route 108 in Scott Township, Lawrence County. 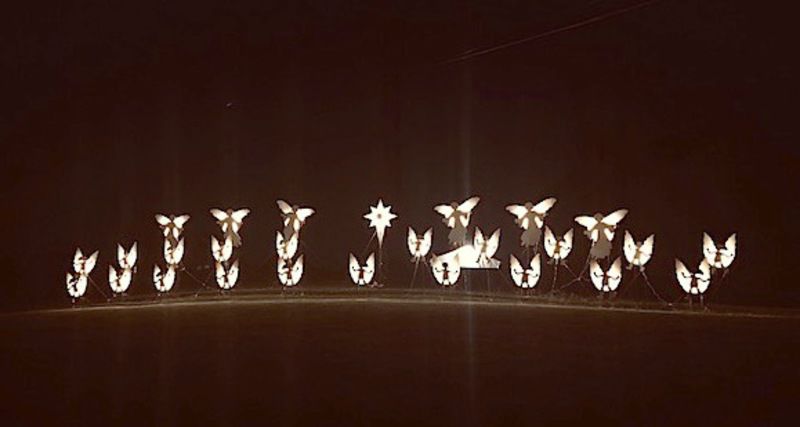 The angels are illuminated at night.

Ed Stoner created this display of angels in 2012 to honor the 26 students and teachers killed in the Sandy Hook Elementary School shooting. The display is located on state Route 108 in Scott Township, Lawrence County.

The angels are illuminated at night.

On a hillside just outside of Slippery Rock, 26 wooden angels stand tall, gathered around a shining star pointing toward the heavens.

Each angel represents a victim of the Dec. 14, 2012, shooting at Sandy Hook Elementary School. Twenty students and six teachers died that day.

“They’re going to a better place,” Ed Stoner said on Friday afternoon as he described the memorial he created just days after the tragedy in Newtown, Conn.

Last year was the first time since 2012 that he didn’t get around to setting up the display shortly before the anniversary of the shooting.

Its absence from state Route 108 showed him how much it means to others; a lot of people asked where it was.

“That’s worth it,” he said, adding he’d be happy if even just one person appreciated it.

With help from friends and family on Thanksgiving day, Stoner arranged the display on his parents’ property – 4648 Harlansburg Road in Scott Township, Lawrence County.

“I wanted to make my year entirely different,” his friend Molly Breakiron said of helping Stoner set it up this year – a meaningful experience.

The display is just over the Butler County line and close to the new Love’s Travel Stop, which means there are even more passing motorists beeping their horns as they drive by.

“That’s them saying ‘thanks,’” said Stoner, a retired state employee who has four children and lives in Marienville.

This Saturday marks the seventh anniversary of the school shooting; gunman Adam Lanza killed himself.

“He kept saying, ‘we lost all these angels,’” Stoner said.

That inspired him to create the angels, which currently grace his parents’ farm and are illuminated after the sun goes down. They’ll remain until the new year begins, then go back into storage.

The angels representing the teachers, which were added a few years ago, are lined up behind the children’s angels, watching over them, he said.

Stoner wants the victims’ families to know that their loved ones haven’t been forgotten.

He has become more appreciative of what he has, like his friends and family, especially his children and his parents.

He is thankful that his mother and stepfather, Marsha and Jerry Martin, let him use their land to host the display.

“It means a lot,” Mrs. Martin said of the angels.

Both Martins have worked as school bus drivers. Mrs. Martin is retired, and her bus route used to go past her own home.

The students loved seeing the angels, and they wrote notes and cards for Stoner, she said.

“We try to take a positive from a negative,” Stoner said of the display.

He remembers people coming together on Dec. 14, 2012, simply wanting to be there for one another.

“That’s just what more of our world needs,” he said.