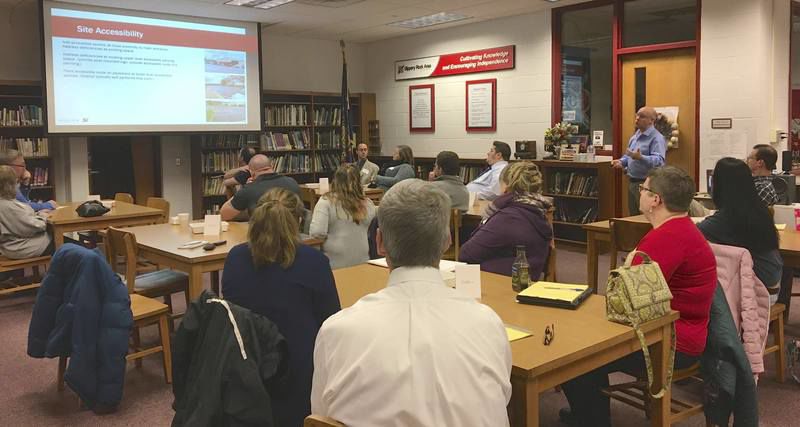 Four charrettes were held at each of the school buildings over the past few months: the high school, Moraine Elementary, Area Elementary, and the middle school.

School directors and community members were in attendance along with administrators and architects, getting a closer look at areas that need improvement.

This past Wednesday night, the group met at the middle school to study recommendations made by Eckles Architecture and Engineering, New Castle, which has been working on a district-wide facility study.

The firm has been looking at these categories: safety, security, accessibility, doors, hardware, signage, means of egress, exterior and interior components, and how educational programs are delivered.

The middle school houses about 450 students in grades six through eight, and it was built in 1972, said Superintendent Dr. Alfonso Angelucci.

Some renovations were done in 2003, and the outside is original to the building.

“It’s like that early 70s ‘tan and taupe,’” Angelucci laughed.

He shared some information from “Future Driven: Will Your Students Thrive In An Unpredictable World?,” a book written by David Geurin, principal of Bolivar High School in Bolivar, Mo., which is a National Blue Ribbon School.

“He talks about how we have to be future-minded and future-driven,” Angelucci said.

Mark Scheller, a principal with Eckles, led a slideshow highlighting different parts of the middle school.

There are several doors in the main entry vestibule; that needs to be reconfigured to make it easier to direct visitors to the main office.

The doors into the school building are locked, which is a good safety measure.

“But we can make it better,” he said of processing visitors.

The main entry could also include a drop-off area for parents and visitors leaving items for students so they wouldn’t have to enter the building.

Restroom accessibility is good for the most part, but the school might want to consider adding some unisex, single-user restrooms to provide gender-neutral options, Scheller said.

The building exterior has held up well, and just a few minor repairs and maintenance are needed.

There are 916 lockers for students, and most of them are in poor condition and should be replaced.

School officials may want to consider connecting the computer lab and maker space, possibly moving those areas to the library, he said.

The cafeteria would be more functional and easier to clean if the school adds folding tables with connected seats. The kitchen is due for an upgrade, and more students might buy lunch if the meal is served food-court style.

The heating, ventilation, air conditioning, electrical and plumbing components could use a few improvements.

A new phone system is recommended along with emergency call buttons in each classroom, along with additional wireless access points, Scheller said.

Meeting attendees filled out a survey and marked whether they think each recommendation should happen within the next three years, in three to five years, in five to 10 years, or is not needed.

They also worked in groups to study certain parts of the school.

The next step is for board members to review all of that data and feedback and prioritize what construction or renovations need to be completed, Angelucci said.

Community input has been very helpful, and Angelucci thanked all participants for helping.

“It’s been eye-opening to get feedback,” Scheller said, noting that participants have had some great ideas.

He expects Eckles to have some cost estimates in the near future, and there is potential for some work to start over summer break.