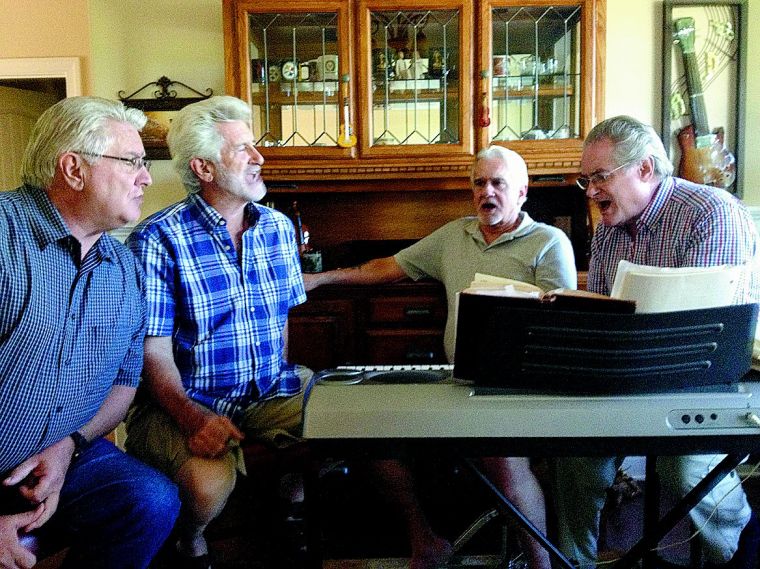 The Shaw Brothers, from left, Tom, Jim, Brian and Kenton, met a few weeks ago at Brian's home in Nashville to rehearse for the upcoming concert, which will feature their Southern gospel style and include Kenton's son Randy on the keyboards. 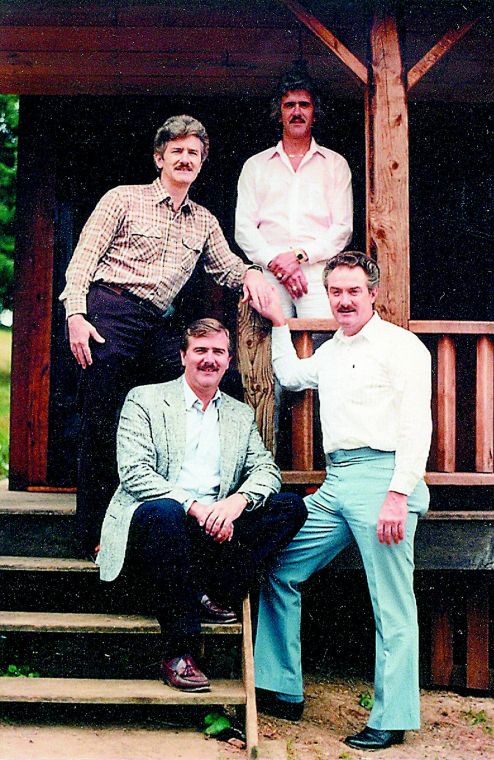 The Shaw Brothers, pictured here in 1990, are reuniting Aug. 10 for a concert at the McQuiston Center by the Park in Sandy Lake. In the front from left are Tom and Kenton and in the back from left are Jim and Brian.

The Shaw Brothers, from left, Tom, Jim, Brian and Kenton, met a few weeks ago at Brian's home in Nashville to rehearse for the upcoming concert, which will feature their Southern gospel style and include Kenton's son Randy on the keyboards.

The Shaw Brothers, pictured here in 1990, are reuniting Aug. 10 for a concert at the McQuiston Center by the Park in Sandy Lake. In the front from left are Tom and Kenton and in the back from left are Jim and Brian.

The Shaw Brothers quartet is reuniting for a much-anticipated performance Aug. 10 at the senior center in Sandy Lake, and their Southern gospel singing promises to be a treat for all ages.

"It's just good for the heart," said Heidi Perrine, director of the McQuiston Center by the Park, 29 Railroad St.

The Shaw Brothers Concert, featuring Kenton, Jim, Tom and Brian with Randy Shaw, Kenton's son, accompanying them on the keyboard, is set for 7 p.m. next Saturday. Doors open at 6 p.m. and refreshments will be sold with the proceeds going to the senior center.

Entry is free but donations will be accepted to cover the Shaws' travel expenses since they all live in Georgia or Nashville except for Kenton, who lives in Findley Township.

This will be the third time the Shaw Brothers will be singing at the senior center. The first time was in 2010, when they presented a legacy concert for their father George, who organized the music programs at McQuiston; a second show was held in 2011, Perrine said.

"I was just so impressed. I love their voices," she said, recalling how she was childhood friends with Karen Shaw when the family lived in the area, later reconnecting with them when she learned they all carried on the musical tradition.

Kenton, 76, is the oldest of eight; he also has three sisters, Barbara, Karen and Brenda. A fourth sister, Yvonne, is deceased.

Their love of music came from their parents, the late George "Hutch" and Ruth Shaw, who sang and played a number of instruments and sometimes performed together as "Sally and Slim," Kenton said early Friday evening at his kitchen table, where he and his wife of 56 years, Sonya, who also sings, were going through some family photos.

"The time was right" to do another concert, he said, echoing Perrine's thoughts during a phone conversation earlier Friday, when she said she still remembers how "thrilling" it was two years ago to witness the Shaws' extended families watch them perform.

"That's always stuck in my head," she said of that image.

The three Shaw sisters will be joining their brothers on stage for a few songs, and Kenton said he can't remember a time when there wasn't music at home; he spent his childhood in Pardoe and Emlenton, his father playing all kinds of instruments.

"Dad and I played together many years," said Kenton, who is retired from Wayside Community Church, Findley Township, where he served as pastor for 36 years. He and Sonya, who have three kids, five grandchildren and six great-grandchildren, still sing there.

His father taught him how to play the guitar, hitchhiking to Oil City to buy him one, and all of the Shaws were naturals when it came to learning how to sing and play a particular instrument, especially Yvonne, who was a great pianist, Kenton said.

"It's wonderful," Mrs. Shaw said of being part of the large family, adding she's always amazed during their travels that people recognize their name.

Their son Randy, who also sings, has a successful career in Nashville, and their two other children, Ruth and Rob, also sing and play instruments.

"It's heart-gripping to see it," Kenton said when asked about seeing his own children carry on his father's legacy.

It's amazing how wide the circle has spread since he and his brothers first started singing as a quartet as teenagers, he said, adding Brian has performed on the Grand Ole Opry stage and signed a recording contract with RCA, and Brian's son Aaron, who's also performed at the senior center, sings on cruise ships.

Kenton hopes those who attend the concert will be uplifted and inspired and appreciate the message of the gospel.

"We plan on having a good time. We'll be throwing in some old love songs, some folk," he said.

Kenton knows his parents would be "really excited" to be in the audience.

"They would be enthralled," he said.