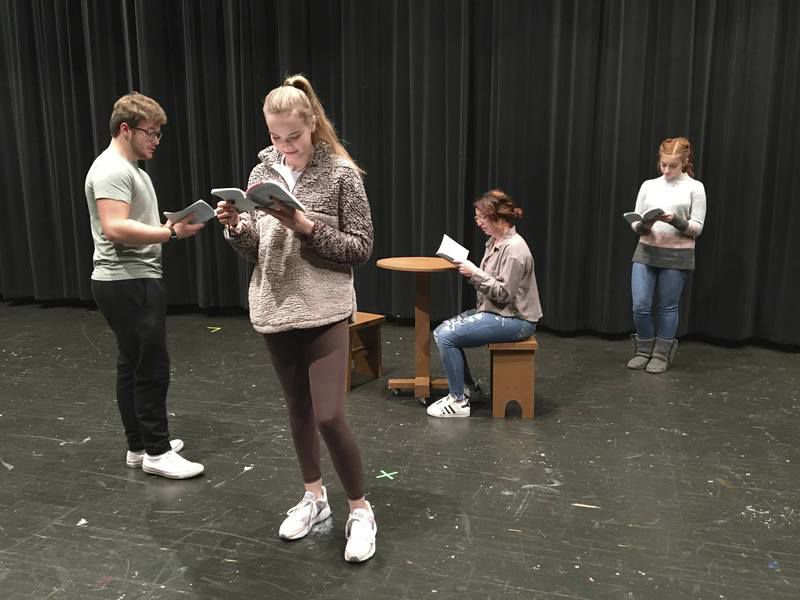 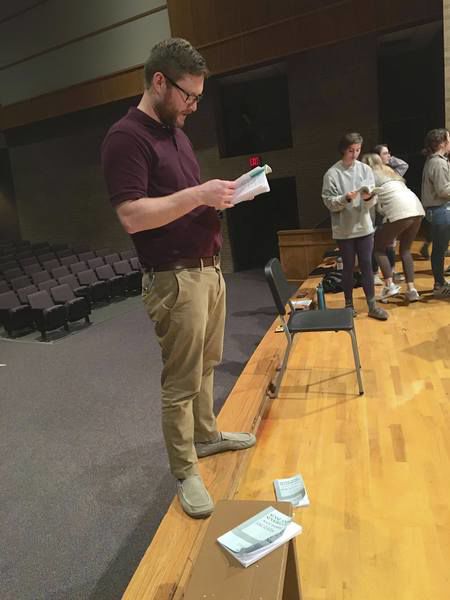 MONICA PRYTS | Allied NewsPatrick McElroy, theater director, leads rehearsal of “Sense and Sensibility” at Grove City High School. The show will be presented as a “little” theater production, with the audience sitting on the stage. 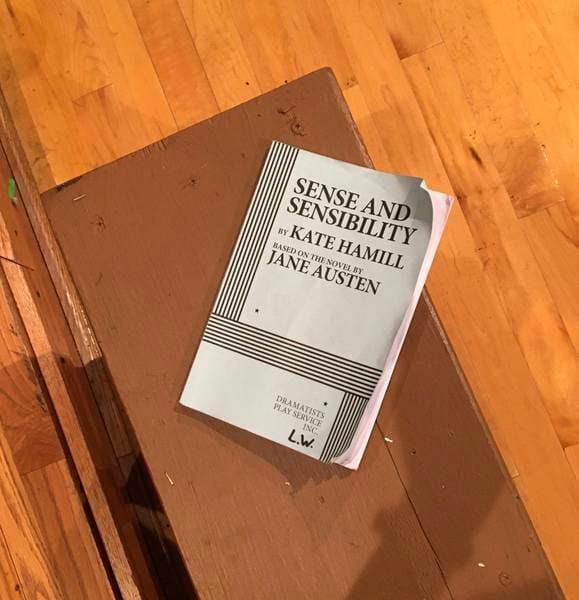 MONICA PRYTS | Allied NewsThe stage version of “Sense and Sensibility” was written by Kate Hamill and adapted from the classic Jane Austen novel.

MONICA PRYTS | Allied NewsPatrick McElroy, theater director, leads rehearsal of “Sense and Sensibility” at Grove City High School. The show will be presented as a “little” theater production, with the audience sitting on the stage.

MONICA PRYTS | Allied NewsThe stage version of “Sense and Sensibility” was written by Kate Hamill and adapted from the classic Jane Austen novel.

The “little” theater setup involves three sets of bleachers on the stage of the auditorium – a significant departure from the usual audience seating.

“It’s something I’ve always wanted to try,” said Patrick McElroy, director of this year’s production of “Sense and Sensibility.”

McElroy teaches literature and is the school librarian, and he’s been overseeing the school’s theater performances for the past 12 years.

He’s attended shows where the audience is seated on the stage, forming a half-circle around the performers.

It makes for a unique experience, and the Jane Austen story seemed like a great opportunity to give it a try, he said on a recent afternoon during rehearsal.

“It’s very fast-moving,” he said of “Sense and Sensibility.”

The stage version of the classic book was written by Kate Hamill. Set in the late 18th century in England, it follows the Dashwood sisters after their father’s sudden death leaves them financially destitute and socially vulnerable.

The students are up for the challenge that the “little” theater concept presents, McElroy said.

The set will be minimal, so the students will be relying heavily on facial expressions and movement to help tell the story.

Audiences will have an up-close and personal view of each actor. That includes period costumes, many of which are being made from scratch.

This will be the first time that McElroy is presenting an Austen story on stage.

“‘Doing the play has given me a new appreciation,” he said of her work.

Those not familiar with Austen will still enjoy the story, which has serious and humorous moments.

This show is Abby Weller’s first exposure to Austen. She plays Elinor Dashwood, one of the main characters.

“She learns how to find her place in life,” said Abby, a 17-year-old junior.

She’s excited about the “little” theater idea, which she says will make the audience feel like they’re part of the show.

The story itself is relevant to topics and issues that many people face today, like emotional struggles and relationships.

“You’ll leave with that on your mind and on your heart,” Abby said.

Senior Brent Strange is the student director, and he said he’s been enjoying working with his classmates; they’ve become like a family.

The “little” theater is a great experiment, and he’s interested in seeing the audiences’ reactions.

McElroy thanked those who have helped with the set and costumes: his father Greg McElroy, and Joe Hines and April Duncan.

Chad Weierstall, who runs carpentry shop at George Junior Republic, is working with students on creating furniture on wheels for the set.

“Those guys have been really great,” McElroy said.

Attendees are encouraged to reserve their tickets in advance by visiting grovecity.k12.pa.us and clicking on “Sense and Sensibility tickets” on the district’s homepage.

Tickets are $3 for students and seniors, and $5 for adults. Tickets can be claimed and paid for 1 hour before showtime, when the doors open.