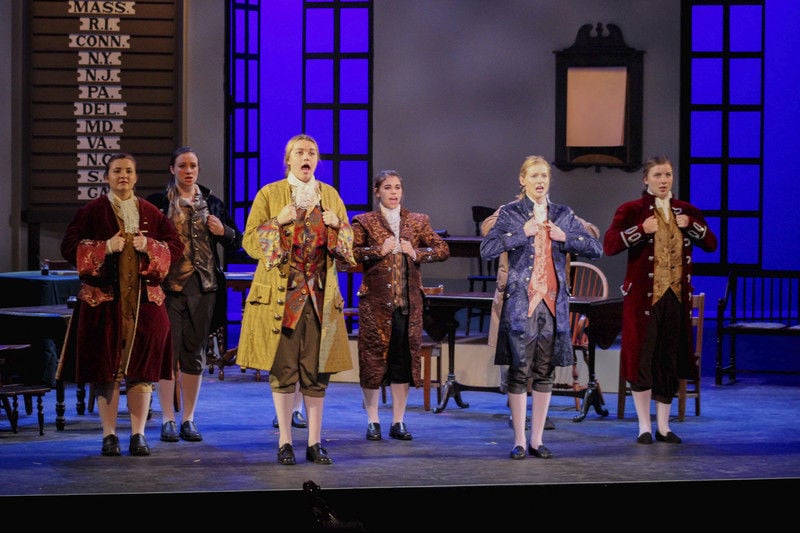 ContributedThe Grove City College Theatre Program presents “1776” Oct. 30 through Nov. 2. Director Tyler Crumrine put his own spin on the musical so more students could perform – there are a number of women portraying men. 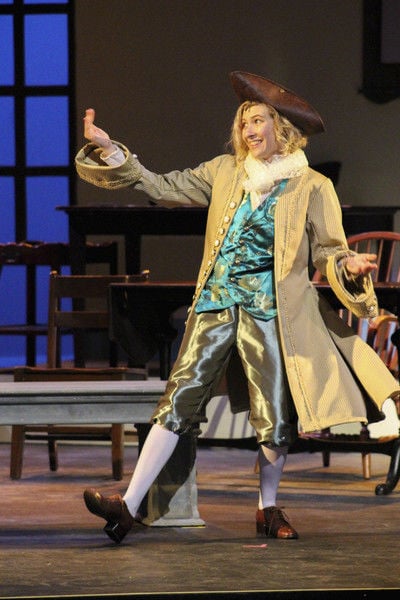 ContributedDelaney Martin, a Grove City College senior, plays John Dickinson in the college’s production of “1776.” She is one of 19 women playing the roles of men in the show.

ContributedThe Grove City College Theatre Program presents “1776” Oct. 30 through Nov. 2. Director Tyler Crumrine put his own spin on the musical so more students could perform – there are a number of women portraying men.

ContributedDelaney Martin, a Grove City College senior, plays John Dickinson in the college’s production of “1776.” She is one of 19 women playing the roles of men in the show.

GROVE CITY – Those familiar with “1776” the musical know that it’s a story about our country’s founding fathers.

The Grove City College Theatre Program is presenting the show next week with one noticeable change: Most of the roles are being played by women.

The cast of “1776,” which has played on Broadway and was made into a movie, typically includes just a few female roles, highlighting the signing of the Declaration of Independence.

In the GCC version, there are 25 cast members, with 19 women playing male roles, said Tyler Crumrine, director of the musical and artist-in-residence.

“And we play into the fact that they are women,” he said, noting that names, pronouns, costumes and lines of the male characters remain intact.

Crumrine, a 2012 GCC graduate, is filling in this semester for Betsy Craig, a professor with the English and theatre department who is on sabbatical.

When Craig – his friend, mentor and colleague – told him that he’d be directing a musical, he had a few ideas in mind.

Knowing that there aren’t many chances for students to perform in a wide variety of plays and musicals while attending GCC, Crumrine wanted to take on a project that would have a large cast with roles for men and women.

“You have to thread a lot of needles,” he said.

The educational theater experience at GCC also has to include an orchestra, leading him to “1776,” which is timely. It shows that politicians are only human, and that members of Congress often have a hard time working together, he said.

“It does speak to our present moment,” Crumrine said.

The idea that he pitched to Craig was performing “1776” with most of the roles going to women – a way to work gender-blind casting into the production.

“She’s all for it,” he said of Craig’s reaction.

When asked about people who may wonder whether the program is latching on to the gender movement, Crumrine said he hopes that “1776” helps start conversations about that topic.

“It’s important to talk about... I would rather be reactive,” he said.

It’s not unheard of for women to play men on stage and vice versa. For many years, lots of Shakespeare performances had men playing both male and female roles, said Ally Echard, a senior who plays Benjamin Franklin.

The goal of the college’s theatre program is to help students stretch and grow, and this award-winning musical is a great opportunity, Crumrine said, with Echard and other student performers agreeing.

The group noted that there is some sexism that’s part of the story, and some lines are meant to be laughable, like a remark made about a woman’s appearance.

Those lines are still laughable when performed by a woman, maybe even more so because it’s coming from a woman, Echard said.

The hope is that the audience members won’t be sidetracked by the fact that women are playing male roles. The performers aren’t trying to trick the audience.

“I feel like the audience will forget,” said Delaney Martin, a senior who plays John Dickinson.

The costumes are appropriate for the time period, and the set design and lighting provide a simple backdrop for the story, the group said.

John Wishing, a sophomore who plays John Adams, said that some folks may see this spin on the musical as taking a risk, but it’s been working out well.

“I haven’t given it a second thought,” he said of working alongside women in male roles.

The theatre program has a good reputation on and off campus, so the students and Crumrine believe that people will enjoy the musical.

“We have a really great community,” Echard said.

Crumrine said he’s been impressed with the students’ work ethic and talent. There’s a good cross-section of students from different fields of study, showing that all students are encouraged to join the theatre program.

Crumrine graduated from Grove City College with a degree in English, minoring in theatre. He lives in Pittsburgh and his work includes literary management, running a press publishing company, and designing books for plays.

His past work has appeared at The John F. Kennedy Center for the Performing Arts, Signature Theatre Company, The New York Theatre Workshop, Pittsburgh’s City Theatre Company, Bricolage Production Company and others.

Admission to the musical is free; it is recommended for ages 10 and up and runs just under two hours. For more information or to reserve a seat, visit www.gcc.edu/tickets