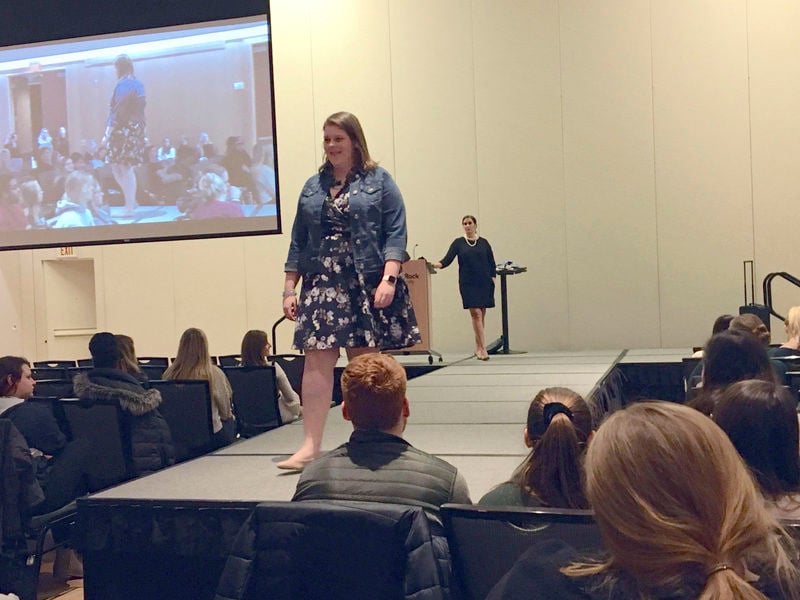 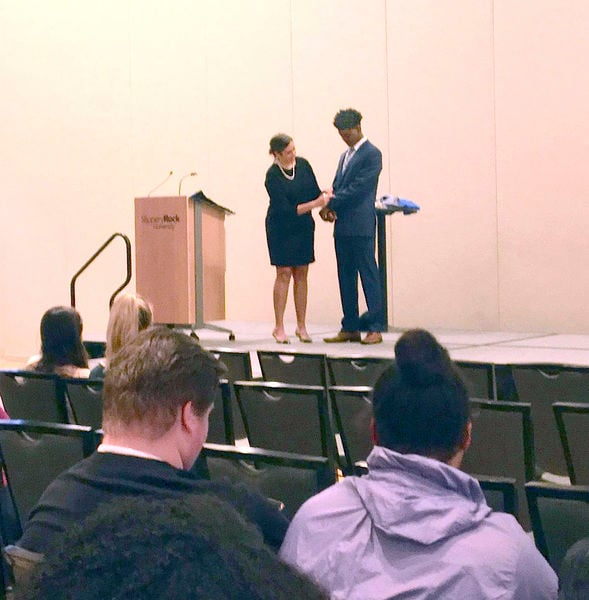 SLIPPERY ROCK – Appropriate professional dress is important – before and after you land a job.

“I love the fact that you are here investing in your future,” Michele Czerwinski said last Wednesday night to a crowd of Slippery Rock University students.

Czerwinski, director of marketing and business development for Grove City Premium Outlets, was the emcee for the Dress for Success Fashion Show that was held in the ballroom of the Robert M. Smith Student Center.

She was joined by Carmen DeRose Jr., general manager of the Springfield Township outlet mall, Dr. John Rindy, SRU’s director of career education and development, and a team that included staff and students from SRU.

The event, which SRU has held several times, was sponsored by SRU’s First National Bank Office of Career Education and Development, Enterprise Rent-A-Car, the outlet mall, AVI Fresh, and the SRU chapter of the Public Relations Student Society of America.

Jensen Troy, a member of the PRSSA, was the lead student organizer. The 19-year-old freshman from Stoneboro is studying communications with a concentration in public relations.

The program began with a series of quotes from well-known players in the world of fashion: “There is no need to dress like everyone else. It’s much more fun to create your own look,” according to model Twiggy.

Seven students modeled clothes from the outlet mall while Czerwinski discussed the “dos and don’ts” of dressing for job interviews, the office, job-related travel, and work functions.

“There’s a lot of competition out there,” she said.

First impressions are made in three seconds, so it’s important to put your best foot forward, and that includes hair, makeup, accessories, and how you sit, walk and talk.

For job interviews, men should be clean-shaven, or have trimmed facial hair. Be careful with food after you get dressed, and don’t wear heavy perfume or cologne.

“Everything should be very simple,” Czerwinski said.

Student Celine Halt walked the runway in a dark skirt and blazer, white shirt, low, nude-colored heels, and a briefcase. The fit and length are good, which Czerwinski said is the key to looking professional and put-together.

She encouraged students to practice walking and sitting in new clothes and shoes to make sure everything feels comfortable.

“That’s gonna give you confidence,” she said.

Stretchy fabric helps prevent wrinkles, and you can’t go wrong with what Czerwinski calls the “mom test” – ask a parent for feedback on your outfit.

Student Josh Young modeled a suit; navy or gray white a white shirt, simple tie, and matching shoes and belt are the way to go.

Most men’s dress shirts come folded in a package, so they must be ironed, she said.

Kemoni Farmer modeled a sport coat and dress khakis, and Kaya Weeks showed an example of what to wear when traveling for business – a flowy blouse, capris and flats.

The professional image while traveling should also to extend to your bags and luggage, meaning that you should avoid flashy patterns and materials like sequins, Czerwinski said.

A necklace or scarf can be a great addition to an outfit, she added.

KacieJo Brown wore an athletic look appropriate for the company gym – solid colors that cover the right areas – and Nicole Dunlop modeled a dress that would work for a holiday office party – it covered her upper arms and wasn’t “too flashy.”

Czerwinski took a few questions from the crowd, noting that pantyhose are not a necessity, and that a good jacket and sturdy boots will work well for inclement weather, but bring a pair of shoes to wear indoors.

Several students won gift cards that can be used at the outlet mall. Katie Petitto, Trisha Speicher and Andrew Weimer said they were excited to have some extra cash, and they learned a lot from the fashion show.

Petitto said she’s interested in accessories, and she didn’t know that it’s considered more professional for women to wear their hair up instead of down.

Speicher said she keeps budget and comfort in mind when shopping for clothes, and Weimer plans to invest in some new outfits.

“I’m already into fashion and the retail scene,” he said.