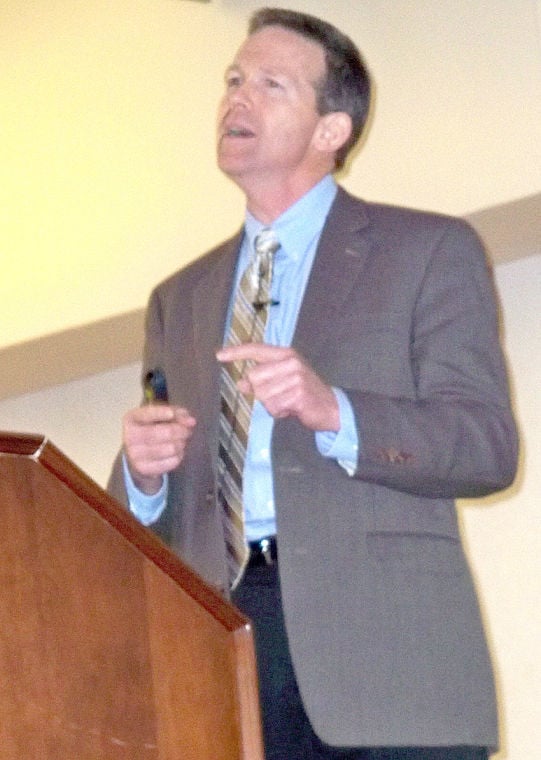 Marcellus detractors insure that participants at the local conference April 22 at Slippery Rock University consider the negative impacts of drilling.

Marcellus detractors insure that participants at the local conference April 22 at Slippery Rock University consider the negative impacts of drilling.

What has been on many people’s minds not only for months but for the last several years--the drilling for natural gas in Marcellus shale--attracted more than 100 people on Friday.

Slippery Rock University hosted “Toward a Sustainable Pennsylvania Marcellus Shale and Sustainability in Pennsylvania,” which drew speakers who have been studying Marcellus shale and its impact on the environment and the community from many perspectives.

The subject of Marcellus shale has been in the news frequently. It has impacted communities along the Appalachian Mountains from northeastern Pennsylvania diagonally through Pennsylvania into West Virginia and Ohio.

Marcellus shale is found in a strata that is under Butler and Mercer counties and is about 700 feet thick at a level of 4,500 to 6,000 feet below the surface. The most significant concern is the perceived potential of tainting of the surface and ground water with the method used to extract natural gas from the shale.

Mercer and northern Butler counties are not in the prime areas for drilling. These areas would not be as productive as drilling operations in Washington and Greene counties south of Pittsburgh. However, regardless of where the drilling takes place, citizens should be aware of where drilling is happening. Landowners should also be prudent before signing any lease with a drilling company.

In 2008, when John Hanger was appointed as director for Pennsylvania’s Department of Environmental Protection, he found the regulations that were in place to be inadequate for this growing industry. Pennsylvania has had gas and oil drilling since 1859, when Edwin Drake drilled the first oil well in Titusville. The drilling regulations were written for a small industry and were substandard for the influx of gas wells that were appearing in the northeastern and southwestern parts of Pennsylvania, Hanger said.

It took until August 2010 for regulations to insure the protection of the state’s streams and rivers.

“Buffering is the best quality protection for our river and streams,” Hanger said. “Rules on the page matter. There are good companies who are following the rules, but we all do better when there is oversight.”

When Hanger was appointed, there were 88 staff members to regulate the oil and gases that were growing and putting new demands on the bureau. By 2010, there were 202 people to help oversee the drilling operations across the state.

“A good regulator should not be friend or foe to the industry or to the foes of the industry,” Hanger said. He expressed his frustration that the bonding level at $25,000--no matter how many wells are in the field--is inadequate.

Hanger has been a proponent of a reasonable tax on the drilling companies, with the funds being used to fund oversight of the industry.

The median income in Pennsylvania is $49,000 per household. The cost of heating homes can be about $500 per month.

“In the U.S., 80 percent of people use oil or coal; about 55 percent of that is coal,” Hanger said. We need to find an economical way to generate power and to heat our homes, he said.

The toxic rules for power companies are about 40 years old or older. Natural  gas is considered a cleaner fuel for the electric power plants.

Hanger is a proponent of wind farms and pointed out that he is seeing more solar, but he would like to see an expansion of both technologies.

Griffin reduced all his research numbers to the potential impact of greenhouse gas emissions.

“There was a projected a high production of gas-fired electric plants, but the supply of gas did not move fast enough to meet the needs,” he said. The electric demands continue to climb, so coal-fired plants were not replaced by cleaner burning gas-fired plants.

It was expected that the U.S. would be bringing natural gas from the north slope of Alaska, but that hasn’t happened. Griffin said that in 2005 the U.S. began importing liquefied natural gas (LNG).

The question remains, how do we meet energy needs and reduce the impacts?

Griffin and other speakers talked of hydrogen being the energy source in the future, but the technology is still in development to make it a viable alternative.

When looking at extraction of gas from Marcellus shale, the impact needs lessened, Griffin said.

“Why are we not putting more efforts into renewable energy sources?” He asked. “We must be willing to pay for it.”

Dan Billman, consulting geologist, and Paul Dudenas, former manager of engineering for East Resources/Shell Appalachia, presented the basics of where Marcellus shale is located within the tri-state region (Ohio, Pennsylvania and West Virginia) and the potential for drilling in the area. Billman has worked in the oil and gas industry for 18 years. This industry isn’t new to the area; but the technology that was developed by George Mitchell in Texas began the use of fracking--pumping in large volumes of water--to force out the gas trapped in the shale layer.

Billman began working with horizontal drilling in 1990. One of the advantages of this technology is that several wells can be drilled from the same well pad.

Members of the audience questioned how fracking below bedrock would impact the bedrock, wondering if the water and chemicals that are forced into the shale layer would come up to the bedrock layer, which protects water sources. It was noted the source of problems with tainting the water source is not in the fracking itself but by human error on the surface.

Penn State’s Tim Kelsey, Department of Agricultural Economics, and Jon Laughner, executive director, Beaver County Cooperative Extension, presented the economic impacts on communities and the cycle of the impact on the community during the drilling phase of a gas well and what happens when the drilling stops.

Kelsey explained that some communities have seen an increase in housing costs because of the influx of workers for the gas industry. This has become a hardship for the low- to middle-income families who have been living in the area. These people are now experiencing increases in their rent.

Communities also have additional need for emergency responders for potential incidents at the well sites. Local communities have increased costs that result from the need of additional personnel and training for them.

The conference also hosted those who oppose the industry, who displayed in the meeting room a banner pointing out the reasons to stop the shale drilling industry.

Ben Price, projects director of the Community Environmental Legal Defense Fund, spoke on the rights of the people to demand banning fracking.

Dr. Charles Christen, with the Center for Environments and Communities at the University of Pittsburgh’s Graduate School of Public Health, outlined the potential health hazards around and at the drilling sites.

Dr. John Stolz, Duquesne University, delineated the environmental and infrastructure problems that come from the drilling of Marcellus Shale. He presented pictures that he had taken from a helicopter that showed the overview of the well sites and the impact they have on the road systems of rural southwestern Pennsylvania and the impacts on individual farm families where the mineral rights have been leased to the drilling companies.

“The greatest concern is the tainting of well water,” said Theodore Kneupper--professor emeritus at Slippery Rock University and one of the organizers of the event--in a separate interview. Citizens are advised to have their own wells tested to the greatest extent.

“This could cost up to $2,000 for a third-tier test done twice a year,” he said. “This would be at the expense of the landowner whose property is beyond 1,000 feet of the drill site.”

Many people also expressed concern for the contamination of the state’s rivers and streams.

“If we have widespread contamination of the waterways of the state, it will impact one of the largest industries in the state--tourism,” Kneupper said.

Kneupper has asked several experts how many wells are anticipated, but has not been able to get an answer from company representatives or government officials.

Kneupper expressed extreme distrust of the oil and gas drilling companies that are operating in Pennsylvania.

“Many people have expressed concern about the impact on their property values,” Kneupper said. To date, there have been no studies completed.

“There is anecdotal incidents of property values dropping from a third to 80 percent of mortgage values,” he said.

In response to the public concern, a citizen’s group--Marcellus Outreach Butler--is planning a meeting at the Butler Area Public Library at 1:30 p.m. May 7 to bring Washington County farmer, Ron Gulla, to the area to hear his story of the negative impact that Marcellus shale drilling has had on his farm and his family.