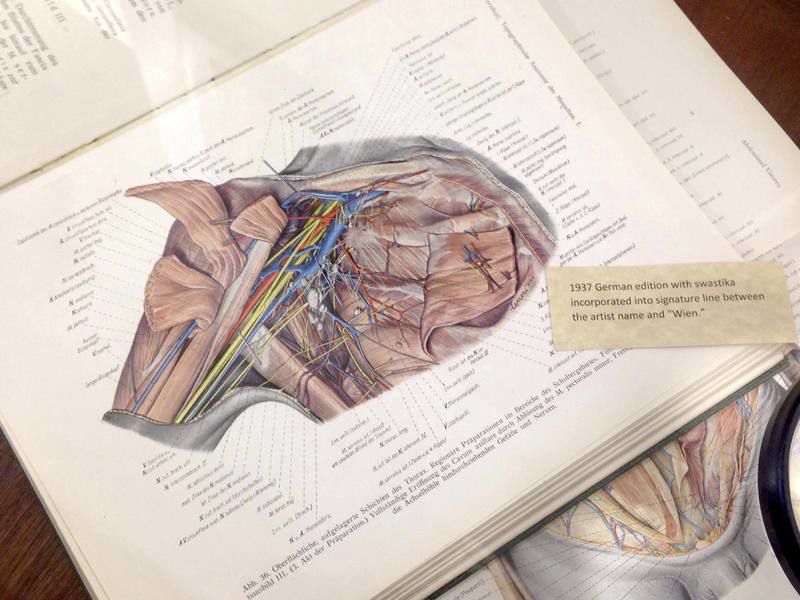 MONICA PRYTS | Allied NewsAaron Fried visited Slippery Rock University on Thursday to discuss an anatomical atlas put together by Eduard Pernkopf. A copy of the book is housed at SRU’s Bailey Library, and it’s controversial because of its Nazi ties. This copy of the atlas belongs to Fried and it shows how a swastika was hidden in some of the artists’ signatures. 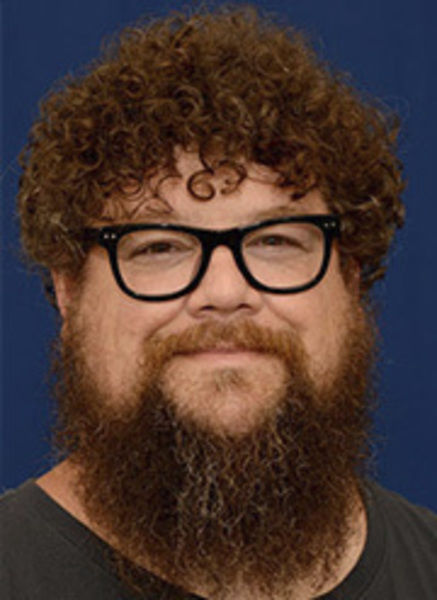 MONICA PRYTS | Allied NewsAaron Fried visited Slippery Rock University on Thursday to discuss an anatomical atlas put together by Eduard Pernkopf. A copy of the book is housed at SRU’s Bailey Library, and it’s controversial because of its Nazi ties. This copy of the atlas belongs to Fried and it shows how a swastika was hidden in some of the artists’ signatures.

SLIPPERY ROCK – The full story behind a controversial anatomical atlas with Nazi ties may never be known.

“I have been grappling with this for many years,” Aaron Fried said on Thursday afternoon at Slippery Rock University.

His lecture, “Pernkopf to Present Day: Nazi Anatomists and Ethical Implications of Their Work,” was held in the Advanced Technology and Science auditorium as part of the school’s Kaleidoscope Arts Festival and Holocaust Remembrance Program. It was sponsored by Bailey Library and the history department.

Fried, an associate professor of anatomy and physiology at Mohawk Valley Community College in Utica, N.Y., researches the history of body donations, including body use in Nazi Germany.

The college also has a human donor lab, and Mohawk considers those people to be the students’ first “silent teachers,” he said.

He described his studies of Eduard Pernkopf’s “Topographical Anatomy Atlas of Man,” which is considered a unique book because of its use of artistic watercolors, rather than the typical drawings for that time period – the first of seven volumes was published in 1937.

Fried considers the book to be controversial because many people believe that the bodies depicted in the atlas are based on people who were executed because they were political opponents of the Nazi party.

Logs and other documents about those bodies were destroyed by bombs toward the end of World War II.

“This is one of the unfortunate missing links,” he said.

SRU’s role came into play about a year ago, when Fried requested Bailey Library’s copy of the atlas, said Lynn Hoffman, a reference librarian with SRU.

Fried returned the books with a letter noting this: one of the volumes shows some watercolors with artists’ signatures that feature a swastika; those artists were considered Nazi sympathizers. An updated edition of that same book shows that the swastikas had been removed.

Hoffman moved the atlas to the library’s special collections section, and Fried brought his own copies to the lecture, showing how one version includes Nazi symbols and another doesn’t.

Pernkopf, an Austrian physician and anatomist who died in 1955, spent a lot of time working at the University of Vienna.

He started to develop the atlas – essentially a dissection manual – eventually bringing on several artists to paint different body parts, Fried said, noting that Pernkopf was a Nazi.

For many years, it wasn’t acceptable to donate your body to science. Most donated bodies came from executed prisoners or people who died in a hospital and were never claimed by family.

After Germany annexed Austria in 1938, Pernkopf was made the dean of the medical faculty at the University of Vienna.

He required faculty members to prove their nationality, and about 77 percent of them were kicked out, including several Nobel Prize winners who later died at concentration camps.

“He cleanses the non-Aryan faculty,” Fried said of what Pernkopf considered a push for “racial hygiene.”

Nazi eugenics picked up speed – things like forced sterilization and euthanasia done under the guise of “improving public health.”

First disabled children were euthanized, then disabled adults followed by those with mental illness, and those who weren’t German, Fried said.

Years after the atlas was published, some people started to notice that the bodies depicted in the book very much resembled concentration camp victims – gaunt faces, visible ribcages, and very little body fat.

A study was done in the mid-1990s; it looked at death records and concentration camp records and noted in its 1997 release that it was common for executed prisoners to be used for dissection.

Where those executed prisoners came from and whey they were killed is often debated, Fried said.

“Probably these people wouldn’t have consented to the use of their bodies,” he said.

The study also raises the question of whether the atlas should be banned – keeping in mind that banning books is a well-known Nazi practice.

Or maybe it can be used to teach ethics, considering Pernkopf was a doctor who should have been following the oath to reject harm as a practicing physician.

Fried said he’ll never use the books for anatomy education; he wants to honor the victims.

He referred to a plaque that the Mohawk students walk past before they enter the human donor lab. It’s titled “Never Shall I Forget” and says in part:

“If what these Nazi artists did was part of a greater evil, it is our duty going forward to have more responsibility to the human endeavor of science and medicine ... In death, the victims of Nazi medical research were silenced. For generations after the Nazis were defeated, this silence was deafening. Now that we know better, let it be our mission to be the voice of these innocent victims so that in the future we shall never forget the transgressions of our past.”