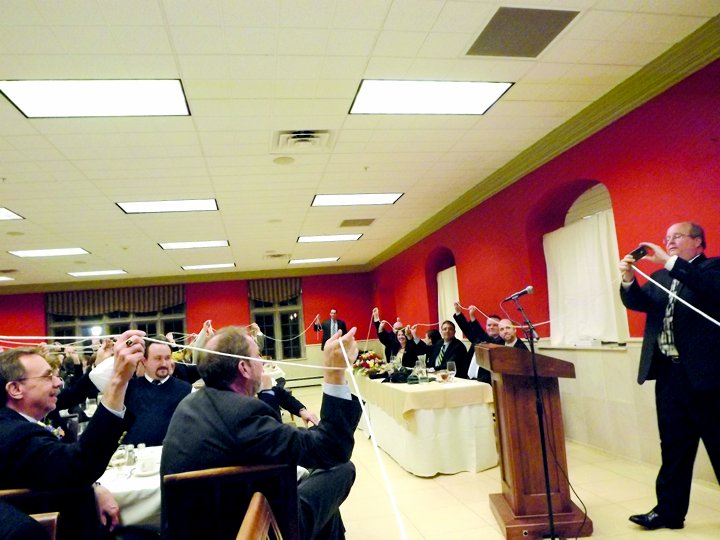 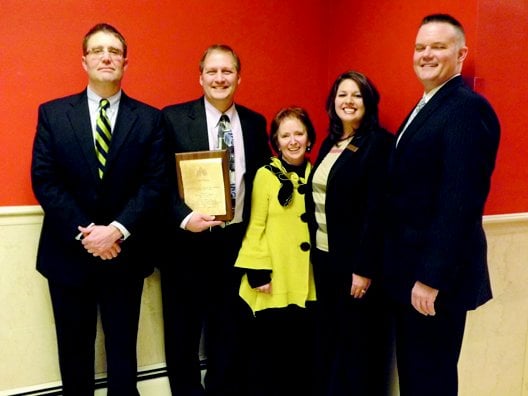 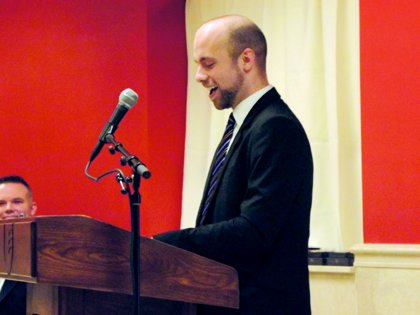 Good times were had by all Wednesday night at the annual Grove City Area Chamber of Commerce dinner held at Grove City College, where the large crowd shared laughs, life lessons and well wishes.

Mitch McFeely, the chamber's outgoing president, shared the organization's accomplishments over the past year: 35 new members, 12 ribbon-cutting ceremonies, various events and fundraisers like the popular Cash Mob and growing projects like the community garden and the Food for Kids Backpack Program.

"I think that's something to be proud of," he said.

"It was really a fascinating experience," DeGroff said of the eight years he lived in the Big Apple.

The Grove City High School graduate earned a marketing degree from Marymount Manhattan College and interned for "The O'Reilly Factor" and the radio counterpart, "The Radio Factor," hosted by Bill O'Reilly.

"My dream was always news," DeGroff said. "It was a lot of work but a big payoff."

He saw how the news business works from the inside out and took care of O'Reilly's guests in the green room including John McCain, Al Sharpton and Barbara Walters, who fell asleep while talking to DeGroff.

"And she snores," he said, the crowd laughing.

His favorite guest was TV alien "Alf," but he wasn't star-struck for long and spent more time learning about guests' backgrounds and the causes they support, like Toby Keith and Vince Vaughn.

DeGroff then worked as a production assistant for the "Fox Report" and "Studio B with Shepard Smith."

He researched topics and briefed Smith before he went on air and the first news story DeGroff wrote for the show was about the 2010 fire that destroyed Wendell August Forge.

He told his boss the story of the historic business in his hometown was worth airing.

"My boss became fascinated by the whole thing," he said, adding the story lasted three days, a rarity for Fox.

"Other news networks were getting their information from Fox News," DeGroff said of how he got the story after contacting Moore through Facebook.

Kunis backed out because of a movie commitment and the only person Moore told at first was DeGroff. Smith ran a "huge story" and Kunis decided she could go to the ball after all.

A few months after the Wendell August fire, DeGroff pitched the idea of how the community came together to support the business, and the vice president of Fox News loved it.

DeGroff's friend and co-worker Laura Ingle was sent to Grove City to cover the story and was impressed with the area and his family.

He kept that in mind when he learned of a job opening in marketing at Wendell August. DeGroff prayed about it and decided to come back home and take the job as marketing and products manager.

"It has been something more than I expected it to be," he said.

"If I won the lottery, I'd spend it all on Grove City," DeGroff said.

Chamber Executive Director Beth Black followed up by announcing the board of directors would like future guest speakers to be people from the Grove City area with stories like DeGroff's to share.

Lindh shared this year's goals for the chamber: continue the successful programs and events, get more members, attract new businesses and work harder to leave a mark for future generations.

Eric Thomas continued the evening, describing a book he read called "An Invisible Thread," the true story of a New York City woman who formed a lasting relationship with a little boy after buying him lunch one day after passing him on the street, alone and hungry.

"All of us in this room are connected," he said, directing several men to walk around the room with a long rope, going up and down each row of tables.

By the time Thomas was done talking, the rope or "thread" made it past every person in the room, the guests picking up their length and holding it up to show how they're connected.

"The thread may stretch and tangle but it will never break," he said. "Look what we have accomplished here."

Thomas had several business owners and community members share their stories of their Grove City connection and how they ended up living and working in the area after being born and raised elsewhere.

Thomas then introduced the 2012 Community Service Award, describing the recipient without giving a name and eventually revealing the award goes to two people.

The couple was described by friends and family as dedicated, motivators, true blessings, humble, focused on God and family, good listeners, generous, gracious, selfless and loving.

The award was presented to husband and wife Jeff and Georgie Hodge, with Thomas saying the committee felt it wasn't right to recognize one and not the other because they're partners in many ways.

"I am speechless for the first time in my life," Mrs. Hodge said as they received a personalized plaque from Wendell August Forge.

Hodge said the award would mean nothing without his wife of 33 years.

Hodge is on Grove City council, is a firefighter with the Grove City Volunteer Fire Department and works as a line leader at General Electric in Pine Township.

Mrs. Hodge is a real estate agent with Grove City Realty and owns Shear Excellence, a hair salon in the borough.

The couple has three children and belong to Grace United Methodist Church, Grove City, where they regularly volunteer.

Volunteering is rewarding and has strengthened their marriage and has showed their children the value of giving back, she said, adding they will cherish their one-of-a-kind award, especially since they are avid Wendell August collectors.

Wednesday's dinner included recognition of retiring board members Dr. David Baglia and Gary Turner, and the upcoming retirement of Kay Dannels, who has been the chamber's office manager for 15 years.

"There is only one Kay and she will be greatly missed," Black said.