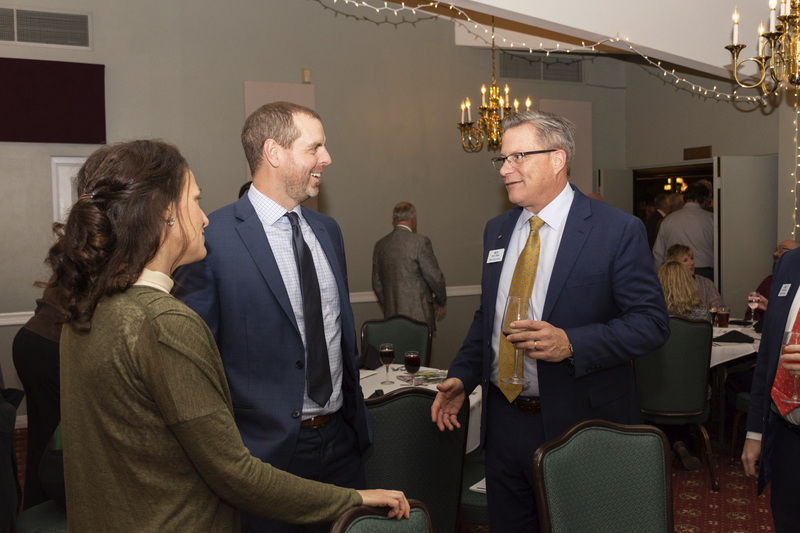 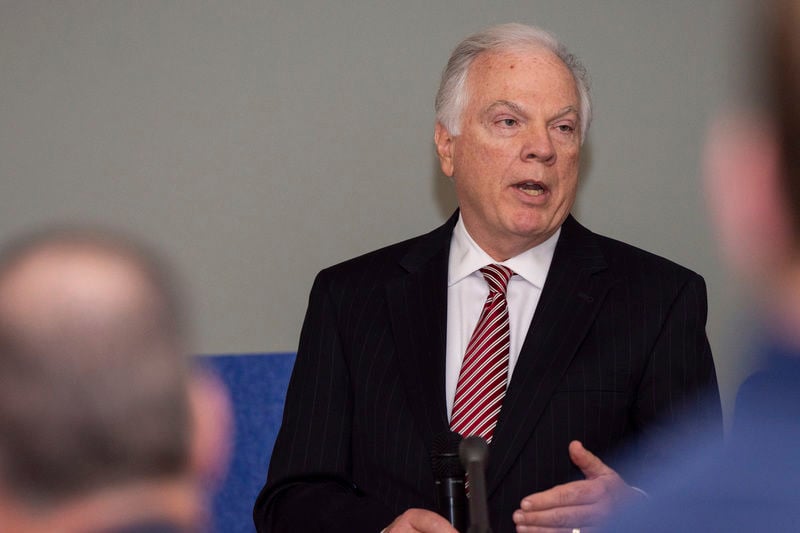 Timothy Bonner, of Grove City, was the keynote speaker for the Grove City Area Chamber of Commerce annual dinner, held Wednesday at the Grove City Country Club in Pine Township. The dinner had the largest attendance — 230 people — in the history of the event.

John Gilliland, of Pine Township, received the chamber’s Community Service Award. Gilliland works as a commercial lender at Mercer County State Bank and started a homeless ministry through Church of the Beloved Disciple, where he is a member.

Chamber member Jeff Black introduced Bonner, an attorney who lives in Grove City, for the speech.

Bonner, who received the chamber’s Community Service Award in 2005, has been a key player in the community since 1975, Black said.

He has worked as an assistant district attorney, is solicitor for multiple municipalities and school boards, taught at Grove City College, and served as board chairman for Grove City Medical Center when the local hospital merged with Allegheny Health Network.

Bonner recognized the hospital’s former board of directors, noting that it voted unanimously to approve the merger. He also welcomed representatives of AHN and Highmark, which owns Allegheny Health Network.

“We are a very unique community,” Bonner said, and talked about the Grove City area’s health care history.

In the late 1970s, Bashline Hospital merged with Grove City Hospital, followed by the opening of a new facility in 1980 – United Community Hospital. At that time, the hospital was about $20 million in debt.

“It was a very worrisome time for the community,” he said.

Now, 40 years later, the hospital has about $29 million with no debt.

In 1980, the hospital’s gross annual revenue was about $7 million. It’s now $45 million, Bonner said. The hospital has about 300 full-time employees and a $22 million payroll, with the emergency department treating about 16,000 patients a year.

The hospital, now known as “AHN Grove City,” has had good relationships with AHN and UPMC. In 2018, hospital leaders decided they needed a strong partner in order to continue to provide quality care.

The Grove City Medical Center board sought a takeover by a nonprofit organization with headquarters in western Pennsylvania and ownership a health insurance company. Bonner said Pittsburgh-based AHN was the first choice because UPMC controls much of the area’s health care, including two hospitals in Mercer County.

AHN and GCMC held talks thenannounced the pending merger in August. The merger, including a contribution of $28.5 million to the Grove City Health Care Foundation, took effect last week. AHN has announced plans to invest $40 million in the hospital over the next 10 years, adding more services and physicians, and the new entity will accept all forms of commercial insurance.

“This is a win-win for our community,” Bonner said.

The hospital has come a long way, and the success of the merger rests with community support, he said.

The 2019 group is working with Grove City Rotary Club to raise money for ADA-compliant playground equipment at Grove City Memorial Park, said Megan DeMaison, a member of the Leadership group.

Amy Molloy, who served as chamber president in 2019, thanked fellow members for their hard work.

The chamber’s events include ribbon cuttings for new businesses, trade show, golf outing and the Foodie Fest, she said.

Grove City YMCA Director Adam Cook, this year’s chamber president, gave the invocation at the beginning of the event.