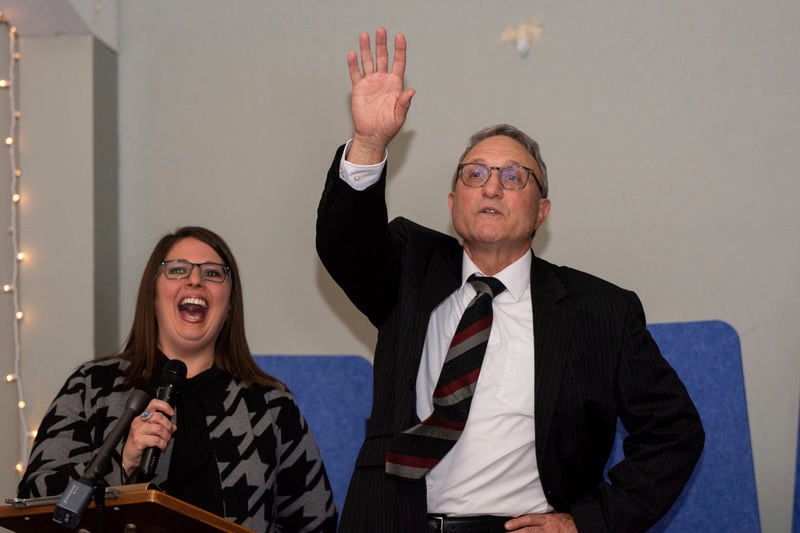 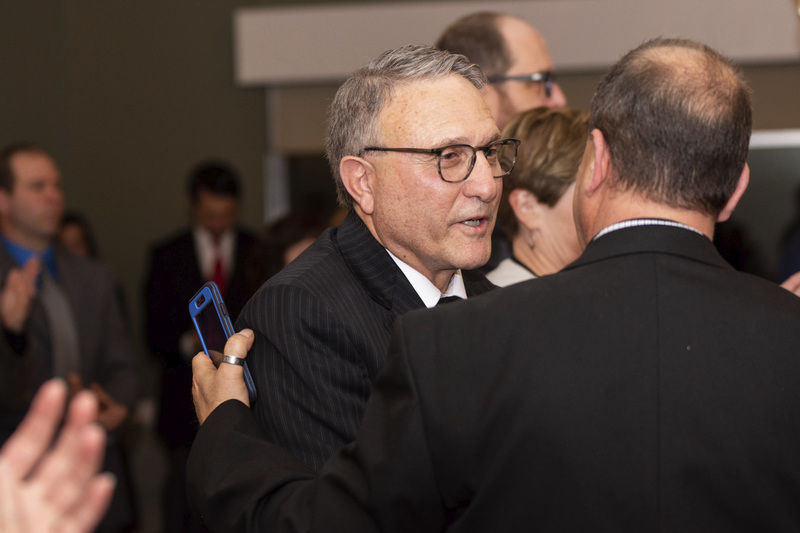 TANNER MONDOK | HeraldJohn Gilliand is congratulated by multiple people after being announced as the chamber of commerce’s Community Service Award winner Wednesday.

TANNER MONDOK | HeraldJohn Gilliand is congratulated by multiple people after being announced as the chamber of commerce’s Community Service Award winner Wednesday.

He didn’t even notice when some of his relatives snuck into the Grove City Country Club just before the announcement.

“I really can’t believe my wife kept this a secret,” Gilliland said Wednesday at the chamber’s annual dinner.

The Community Service Award announcement is one of the dinner’s biggest highlights — and one of the event’s biggest surprises. Past recipients review nominations to find a recipient who cares deeply about their community, said Beth Black, executive director of the chamber.

For Wednesday’s announcement, Eric Thomas, who traditionally presents the award, shared information about the recipient, providing details gathered from friends and family who kept the identity under wraps.

He cited a testimonial from Adam Cook, executive director of the Grove City YMCA, who said the recipient was a former board member and helped the YMCA carry out projects like the building’s deck hockey arena.

The recipient also started BeLoved Mercy Ministries, which serves the homeless, coached softball and Little League, and is a member of the 79-80 Interstate Development Corp. and the Knights of Columbus, Thomas said.

“It really seems like this guy is larger than life,” he said.

The pre-announcement pageantry included biographical information about Gilliland — a banker with six children and 12 grandchildren.

Gilliland’s son Nick said that his father is the best person he knows and stepdaughter Amy said he’s a devoted Christian who is passionate about serving others.

“This world needs more ‘bonus dads’ like him,” she said.

Gilliland took the stage to a standing ovation and thanked everyone for their kind words.

He said his father taught him to give back to the community, and Gilliland wants to keep following in his footsteps.

During the speech, Gilliland said he was humbled by the honor and said his his efforts were made possible only by help from others.

Gilliland lives in Pine Township with his wife, Sharon. He was born and raised in the Grove City area, where he works as a commercial lender for Mercer County State Bank.

Gilliland is a graduate of Slippery Rock University and serves on the advisory board for the university’s school of business.

He’s a member of the Church of the Beloved Disciple and oversees the finance council. The church played a key role in creating BeLoved Mercy Ministries. Church officials asked members to come up with a mission project and chose Gilliland’s idea for a program that serves the homeless.

But it also provides a service for Gilliland — he said it shows him the generosity of Grove City area residents.

Gilliland belongs to the Grove City Sportsmen’s Club, and he enjoys hunting, especially with his grandchildren.

“That’s one of the things I really love doing, going out with them,” he said.