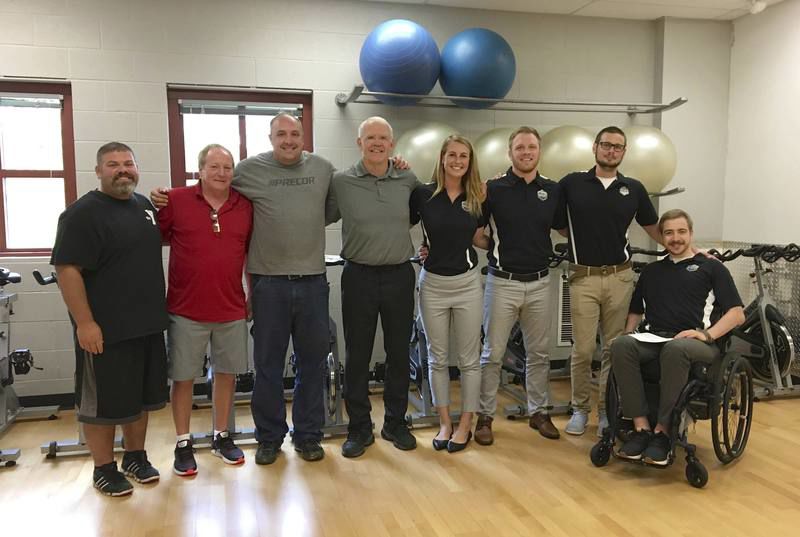 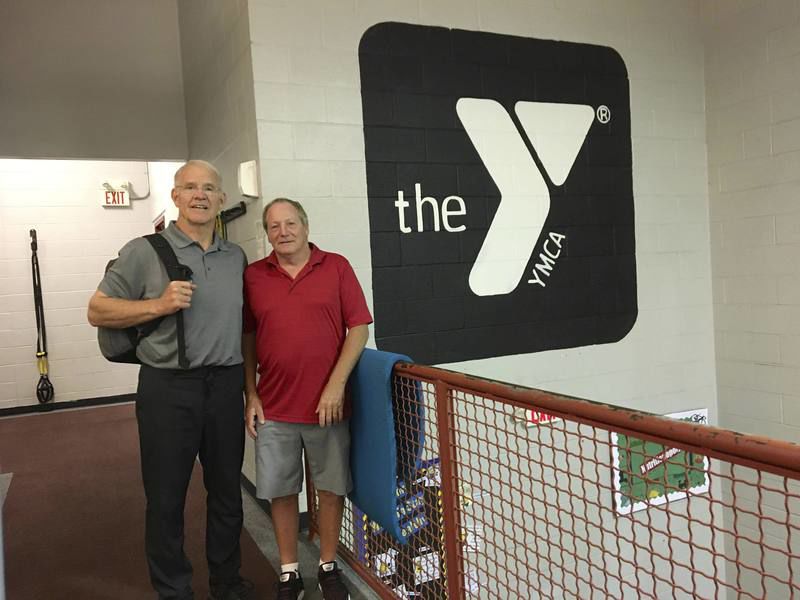 MONICA PRYTS | Allied NewsRay Abplanalp, left, is joined by Jon Kolb of Adventures in Training with a Purpose at the Grove City YMCA. Abplanalp is organizing a fundraiser for ATP – the Second Annual Super Bowl Rematch – featuring Kolb and some of his former Pittsburgh Steelers teammates. The program is set for Oct. 20 in Grove City.

MONICA PRYTS | Allied NewsRay Abplanalp, left, is joined by Jon Kolb of Adventures in Training with a Purpose at the Grove City YMCA. Abplanalp is organizing a fundraiser for ATP – the Second Annual Super Bowl Rematch – featuring Kolb and some of his former Pittsburgh Steelers teammates. The program is set for Oct. 20 in Grove City.

GROVE CITY – Adventures in Training with a Purpose is teaming up with the Grove City YMCA to offer several new programs.

A Pittsburgh Steelers-themed fundraiser is planned to help finance the programs, which will be rolled out over the next few months.

Several YMCA staff members and ATP representatives recently met at the Y to hash out some of the details.

The Y already hosts an after-school program for younger Grove City students, and ATP will introduce some new components that they hope will make physical fitness more fun for that age group.

The Christian-based nonprofit was founded in 2015 by the Kolb family, formerly of Grove City. The Kolb name is a familiar one – Caleb Kolb’s father, Jon Kolb, played for the Pittsburgh Steelers, winning four Super Bowl championships during his time with the team.

Jon Kolb is the director of physical training for ATP, which provides training, programs for local youth and veterans, and more.

The ATP staff works mainly out of three locations: First Assembly of God Church in Hermitage; MAC Fitness in Wexford; and the YMCA in Youngstown.

They’re excited to add Grove City to their roster. In addition to the after-school program, ATP will be bringing its programs for veterans and athletic training to the YMCA.

The after-school program will be starting soon, and the ATP sessions will be included in the fee for students who pay for a membership. Some students receive free memberships through donations and the Grove City Area United Way.

The veterans program starts in mid-October; and the athletic training in late October or early November, said Sarah Watkins, ATP’s director of development and marketing.

The veterans program is free for participants and focuses on physical training to help veterans improve or maintain their quality of life.

There will be a fee for the athletic training, which will help participants ages 3 and up hone their skills for various sports.

“‘Performance’ and ‘challenge’ are the key words,” Caleb Kolb said.

The Y will need time to sign people up for the new programs, and they hope to spread the word as quickly as possible, said Adam Cook, executive director of the Grove City YMCA.

ATP participants in Grove City will use the YMCA facilities, like the fitness center, program arena and group exercise studio.

Area residents can learn more about the programs at the Second Annual Super Bowl Rematch fundraiser, which is set for Oct. 20 at Grove City Masonic Lodge 603, 1340 W. Main St.

It’s being organized by Ray Abplanalp of Grove City, whose family has been friends with the Kolbs for years.

Abplanalp joined the group at the YMCA, saying that he looks forward to ATP’s presence in Grove City.

“They just do really good stuff,” he said.

The first Super Bowl Rematch was held in 2018, and about 200 people attended. Abplanalp expects this year’s event to sell out.

Attendees will get a behind-the-scenes look at Super Bowl X, the 1976 game where the Steelers beat the Dallas Cowboys 21 to 17. Jon Kolb and some of his teammates will be on hand to share their experience.

There will be a basket auction, Super Bowl Squares game, and food and beverages.

The breakfast tickets are $500 for two guests, and that includes an autographed game day shirt, open bar, and a private live auction.

General admission tickets are $55 per person.

Abplanalp said he expects ATP to continue to grow, and he hopes that folks come out to support the organization and the YMCA.

YMCA’s partnership with ATP will give participants many opportunities to shine, Cook said.

“The location is key,” he said, with Jon Kolb later adding that Grove City is a good area for ATP’s expansion.

The Y already has competitive teams and youth sports programs that will be interested in the athletic training – those fees could help fund the veterans program.

For more information about Adventures in Training with a Purpose or to buy tickets for the Super Bowl Rematch, call 724-433-9009 or visit www.adventurestraining.org

For more details about the fundraiser, including how to donate auction items, call Ray Abplanalp at 724-866-3457.