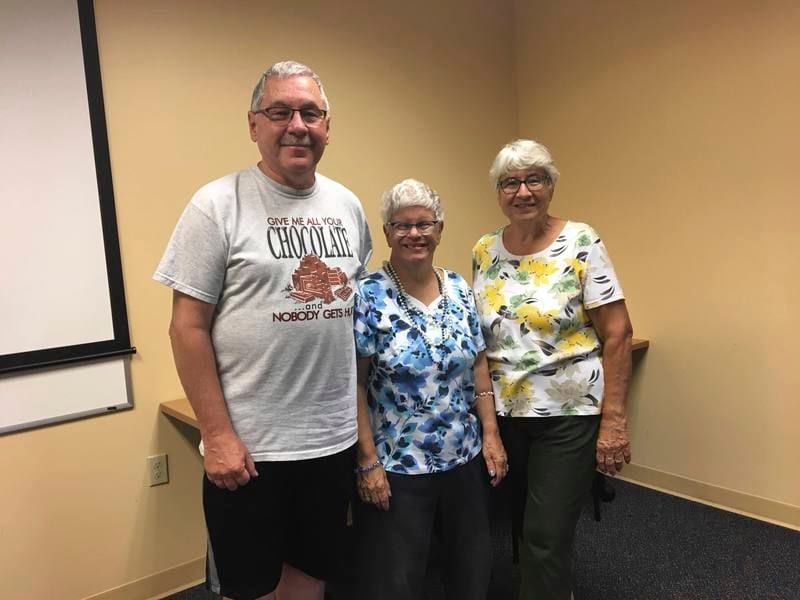 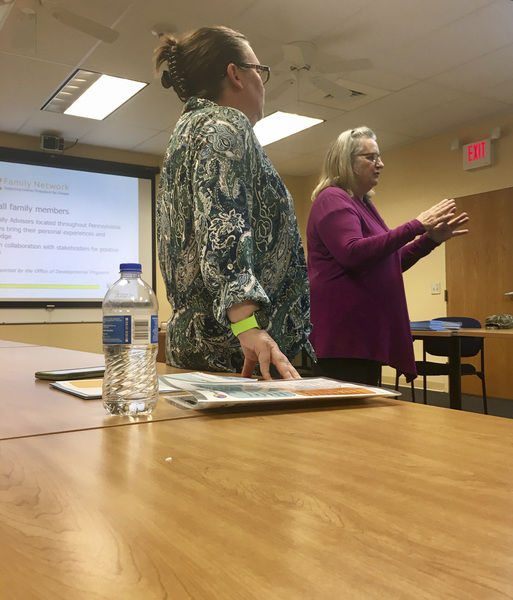 HERMITAGE – There’s just no way around it, at times an adult caring for another adult with disabilities can be overwhelming.

Help is out there, said Paulette Testani, who cares for a disabled relative.

“But you have to have a vision,’’ she said to other caregivers at a recent gathering.

Testani was among the presenters who spoke at the second meeting of Aiding with Aging held at Diversified Family Services’ Hermitage office. The organization is a grassroots support group of adults caring for other adults with psychological or intellectual disabilities.

The group was formed by Janet Puhak and her husband, Bill. The Sharpsville couple cares for Janet’s 59-year-old sister, Celeste, who has intellectual disabilities. Janet’s mother cared for her until her death 10 years ago, at which time the couple took Celeste into their home.

“She’s highly functional,’’ Janet said of her sister. “She can go out and do things in the community.’’

Even though the couple has cared for Celeste for a long time and worked within the available care system, they wanted to learn if there were other programs available for them.

“We do presentations throughout the state,’’ Gaus said. “We are the only state that does these meetings and workshops.’’

“Our mission is to help state residents with disabilities to gain greater independence and choices in their lives,’’ she said.

A key part of her presentation was providing caregivers at the meeting with a step-by-step guide for planning for the future, both for the caregiver and their client or loved one. At the top of the list is creating a plan for their vision of a good life.

Examples given were a parent wanting to have an independent life for themselves and their disabled relative.

There are limits. Gaus recalls a client who wanted to become an astronaut – a job for the elite in terms of knowledge and skill.

But there was an alternative. A planetarium was contacted and the client was accepted as a volunteer.

“He just asked for one thing – that he be allowed to wear a (space) helmet,’’ Gaus said.

Testani, who works with Family Network, found her disabled relative had only one item listed on paperwork of what he didn’t want: not having everyone being disappointed in him.

“He feels like he’s a disappointment to his family,’’ she said.

There are every day decisions caregivers face that often require some hard thought.

Caretakers with high-functioning clients may allow them to walk in their neighborhood alone. But keeping track of their location can be a worry. A GPS system using a watch and a cell phone app can track the location of a loved one.

“You can get a bracelet for them that has your phone number etched on it,’’ Gaus said.

Allowing the disabled to foster romantic relationships is a difficult issue faced by many caretakers.

“It’s very hard to tell someone that they shouldn’t love someone,’’ Testani said.

A public school teacher, Testani said she delved into the science of illnesses such as autism, depression and post traumatic syndrome when she took on her caregiver responsibilities. And looking back, she sees her fellow teachers with the same knowledge level that she once held.

“They know the school policy in how the disabled will be handled,” she said. “But they don’t know very much about the illnesses themselves.’’

Testani noted that, despite her relative’s disability, he is still considered an adult when he turns 18. And she and her husband are starting to have some concerns with their own lives as they enter retirement age.

“I felt overwhelmed when he turned 18,’’ she told the group. “As we’re aging, we have a whole new set of problems.’’

Testani also encouraged caregivers to talk of situations they have encountered.

“We all bring our experiences to the table,’’ she said.

State funding for the disabled also was discussed.

Puhak said she’s concerned about changing state mandates. Initially, the state said they wanted the disabled to be out of a home environment 25 percent of the day, she said. That time could be spent in a variety of activities such as a job, attending an adult day care center or even going to the movies, she said.

Families and caregivers have since complained the targets were unreachable, she said.

“The state pulled back,’’ Puhak said. “They realized it couldn’t be done.’’

“All of our workshops are free,’’ she said. “And we also offer one-on-one mentoring that’s free.’’

Aiding with Aging’s next workshop is set for 6 p.m. Nov. 21 at 6 p.m. at Diversified Family’s office.

Puhak told Gaus she was grateful for the meeting.

“You have a lot more resources we didn’t know about,’’ Puhak said.