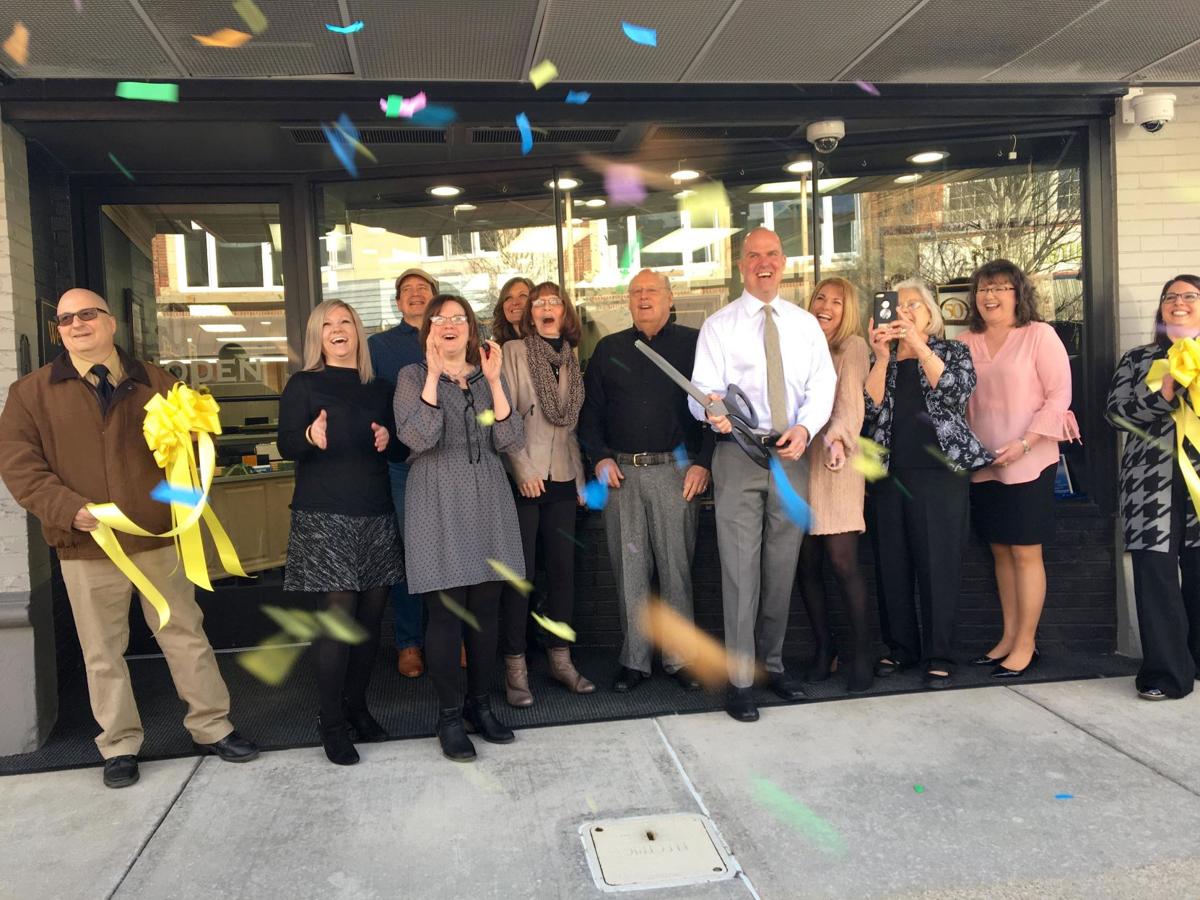 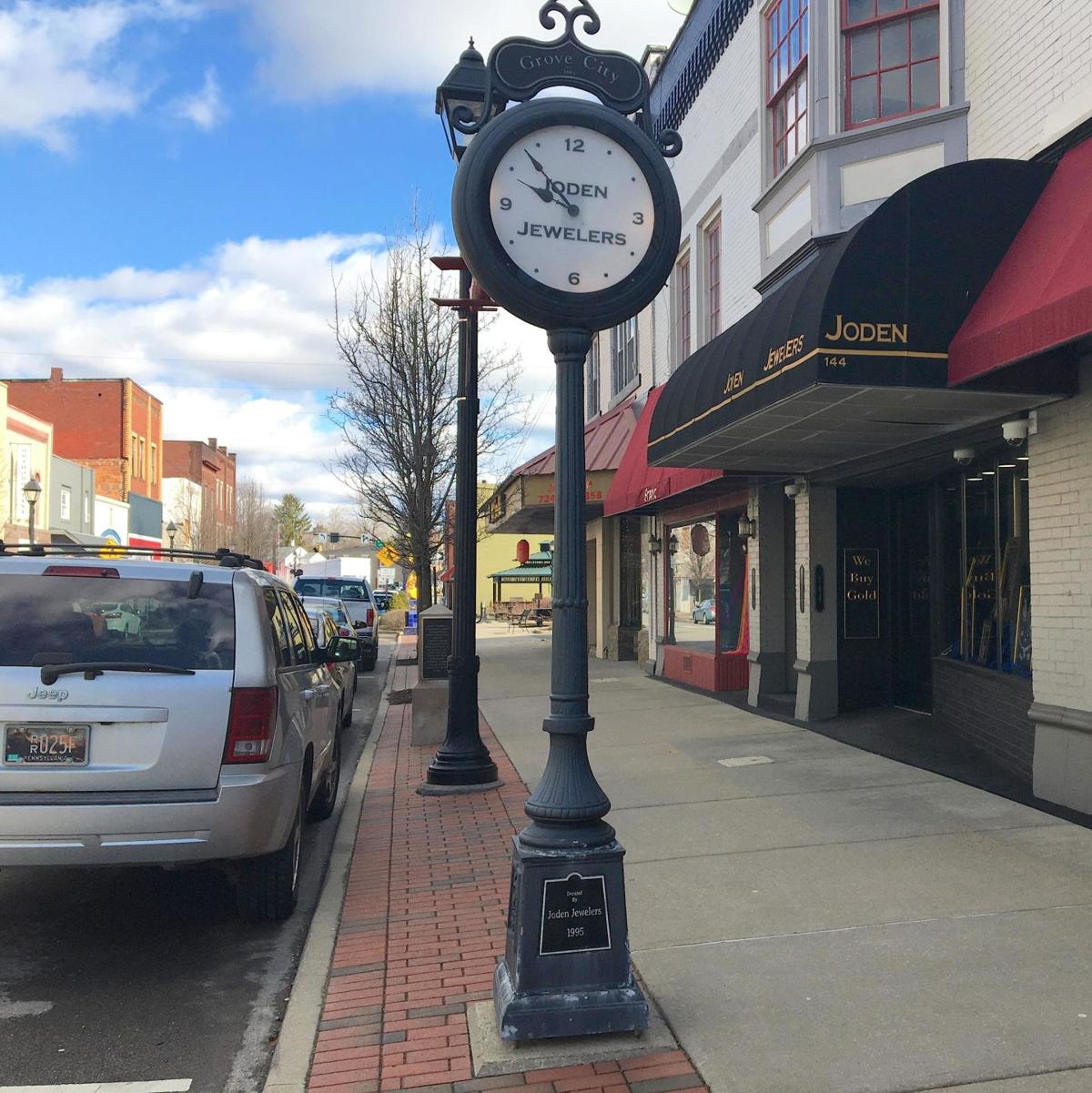 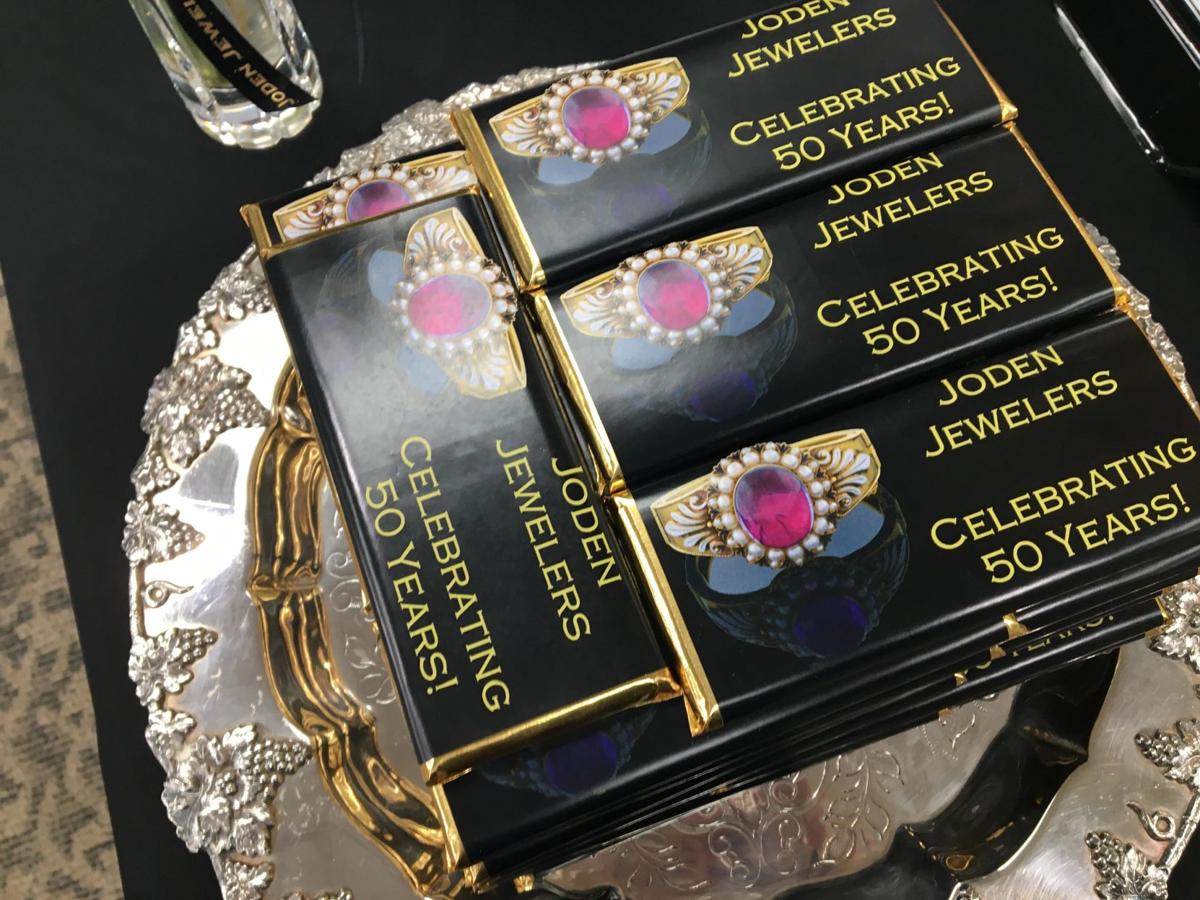 Special candy bar wrappers were made to mark the 50th anniversary of Joden World Resources. 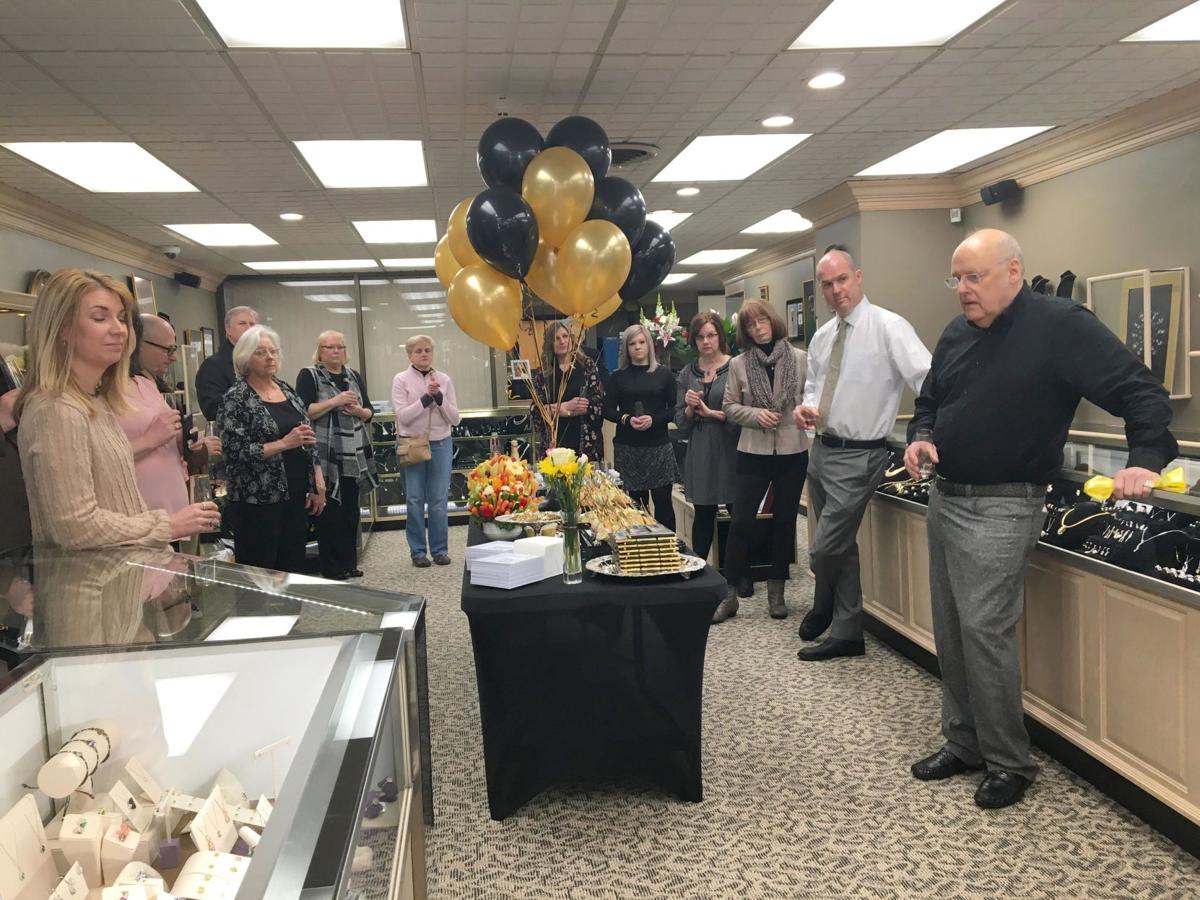 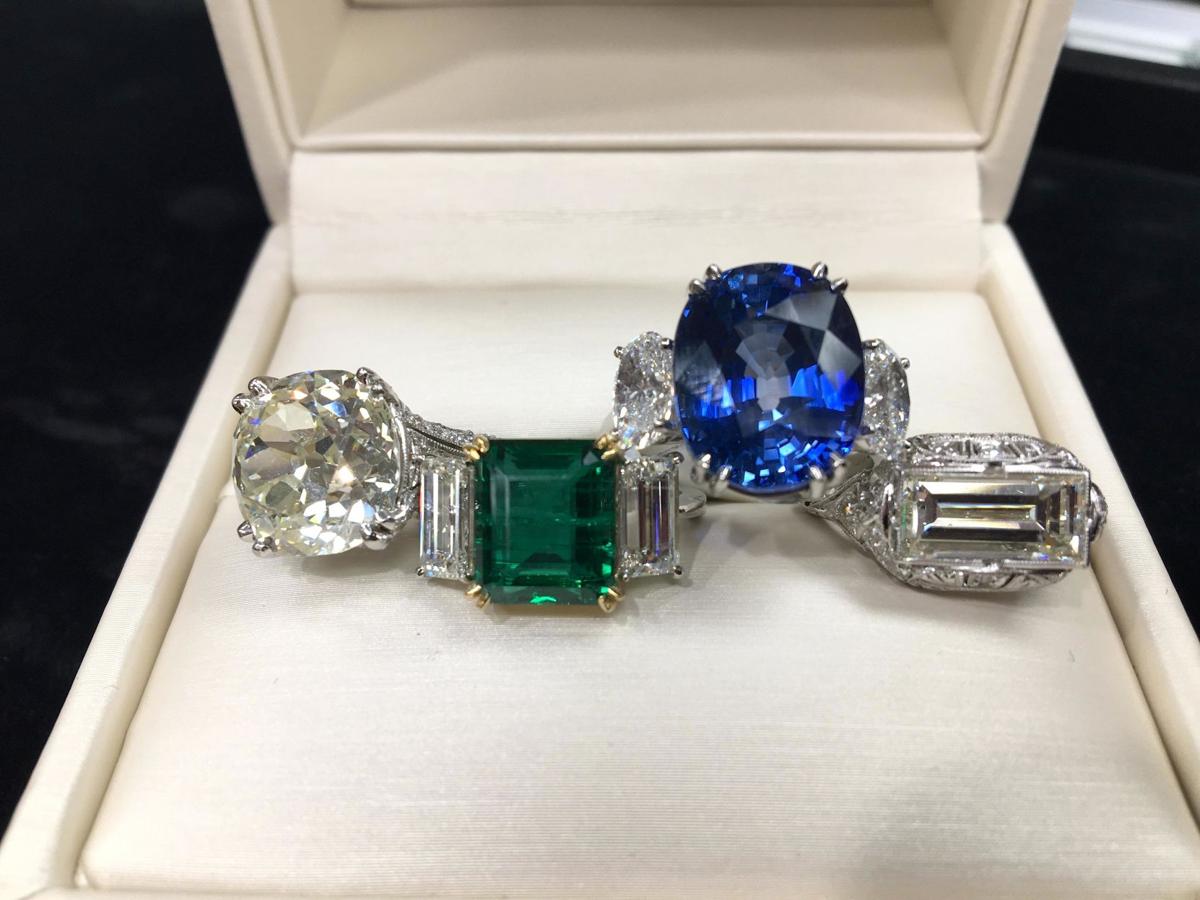 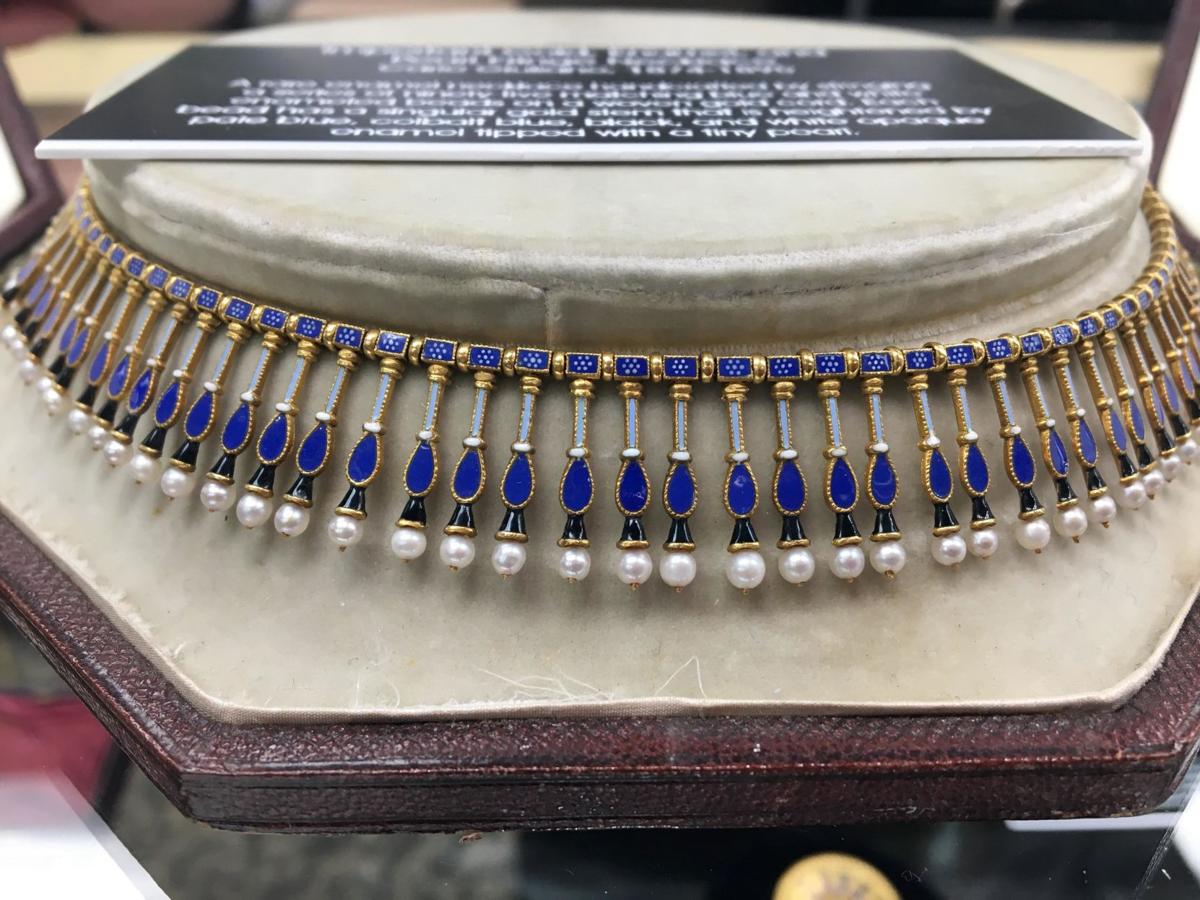 This enamel and pearl necklace at Joden World Resources was created by Carlo Giuliano, who designed pieces for Queen Victoria. 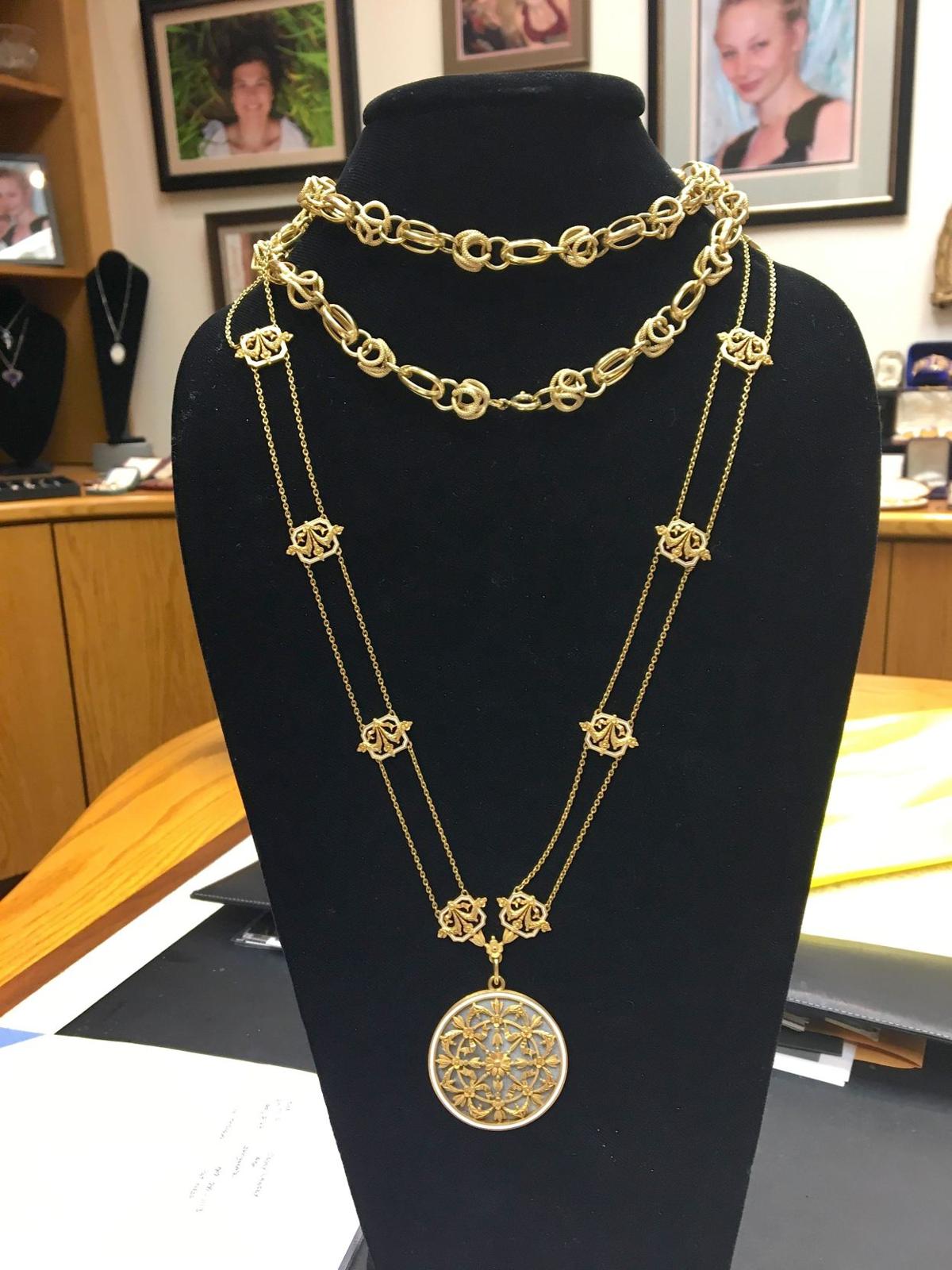 This French-made piece includes a locket designed to hold a lock of hair. 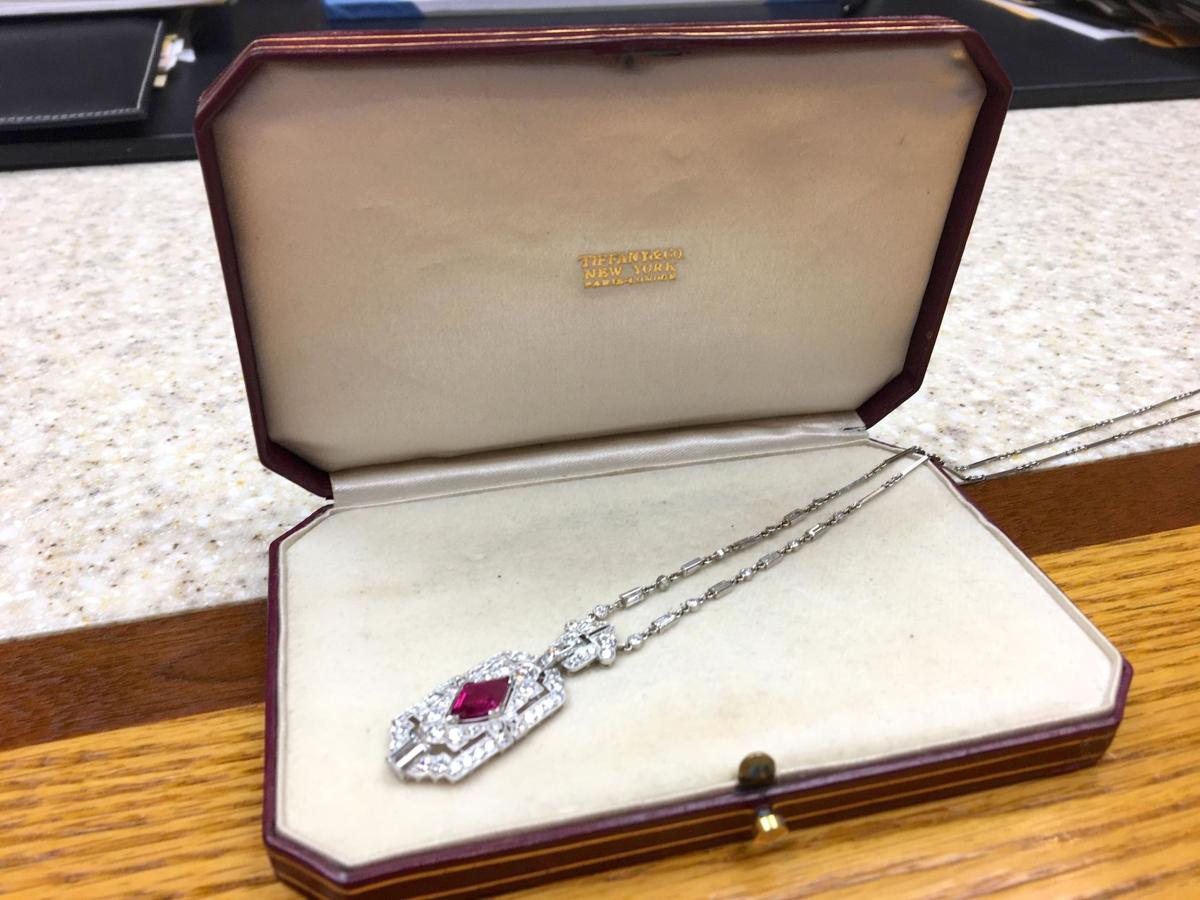 This Tiffany necklace features diamonds and a rare Burmese ruby.

Special candy bar wrappers were made to mark the 50th anniversary of Joden World Resources.

This enamel and pearl necklace at Joden World Resources was created by Carlo Giuliano, who designed pieces for Queen Victoria.

This French-made piece includes a locket designed to hold a lock of hair.

This Tiffany necklace features diamonds and a rare Burmese ruby.

Cartier. Tiffany & Co. Rolex. And even Carlo Giuliano – a jewelry designer who made custom pieces for Queen Victoria.

Shoppers don’t have to visit a big-city store to browse the selection, which is being sold by a jeweler celebrating its 50th anniversary in Grove City.

“You can go to a museum and look or you can come to us and touch” is the motto of Joden World Resources, 144 S. Broad St., which marked the milestone with a ribbon-cutting ceremony held March 13.

“It’s not even a business. It’s a family and that’s why it succeeded,” said co-owner Joe Murawski.

He led a champagne toast, surrounded by family, friends, staff, customers and the Grove City Area Chamber of Commerce.

“It’s a blessing to be where we’re at,” said his son Jay Murawski, co-owner.

Joe’s sister Ruthie Williams, who noted that their parents Adam and Jean had a lot to do with the store, recalled that Joden World Resources opened on a Friday the 13th.

Beth Black, executive director of the chamber, congratulated the family after the ribbon was cut and confetti was showered over the group.

“You’ve not just survived, you thrived,” she said.

Joe and Jay took a moment to recognize Terry Sipe, one of the store’s longtime master jewelers. He passed away on Feb. 2.

“We desperately miss him,” Joe said.

Stepping into Joe’s office for a few minutes, the father and son talked about the family-owned business, which has won multiple awards and is known for its variety of estate, antique and modern jewelry, plus what’s believed to be the country’s largest collection of Giuliano pieces.

Joe’s father Adam was a bench jeweler who ran a store in New Castle, and he taught at a jeweler’s school that used to be located in New Castle.

Joe learned a lot about the jewelry industry from his father. He remembers when Royal Jewelers in Grove City was going out of business; he bought the showcases and safe, soon opening Joden World Resources with then co-owner Dennis Maine.

“Joden” is a combination of their first names, Joe said, noting that his mother Jean also worked there at one point.

Jay joined the business when he was 24, and like Joe with Adam, Jay learned a lot from his father. Both of them live in Pine Township with their families.

“We’re a team. He did all the blood, sweat and tears,” Jay said.

They’re both trained by the Gemological Institute of America, and they sell and supply to jewelers in 22 states and Europe.

Joe recalled a trip to Beverly Hills, where he was enjoying breakfast with his late daughter Sara on Rodeo Drive, the famed street filled with high-end shops.

He told her that Joden had accounts with five jewelers in that area – something that most people would never expect from a small-town shop.

“No two things are the same,” Joe said of Joden’s selection.

He pulled out a diamond Tiffany necklace from 1930, a rare Burmese ruby at the center.

“We have dealers all over the world,” he said.

The staff at Joden World Resources can work with any budget, and they pride themselves on having a large selection of antique jewelry.

They also offer repair services, and appreciate the work of master jeweler Steve Becker and the rest of the staff.

They love what they do, especially working with community members and multiple generations of families over the years.

“Jewelry usually has a story,” Joe said of how those families often pass on certain pieces to younger relatives.

He brought out a rare, French-made necklace that featured enamel and a locket for a lock of hair.

Jay pointed out a prominent Giuliano piece – a necklace made of gold, enamel and pearl.

“We like them all,” said staff member Carrie Martin when asked if she had a favorite piece.

Karen Palmer, who works at a neighboring business, said that she helped her husband Ed pick out her engagement ring at Joden. They’ve been married for 43 years.

Nancy Bushee, who owns Nancy’s Hair Loft next door, said she refers a lot of people to Joden World Resources.

She says their selection is exquisite, and she owns a lot of pieces from Joden, many of them gifts from her loved ones.

The store is currently closed because of the COVID-19 pandemic, but they can also be reached by calling 800-747-7552 or emailing joden@joden.com