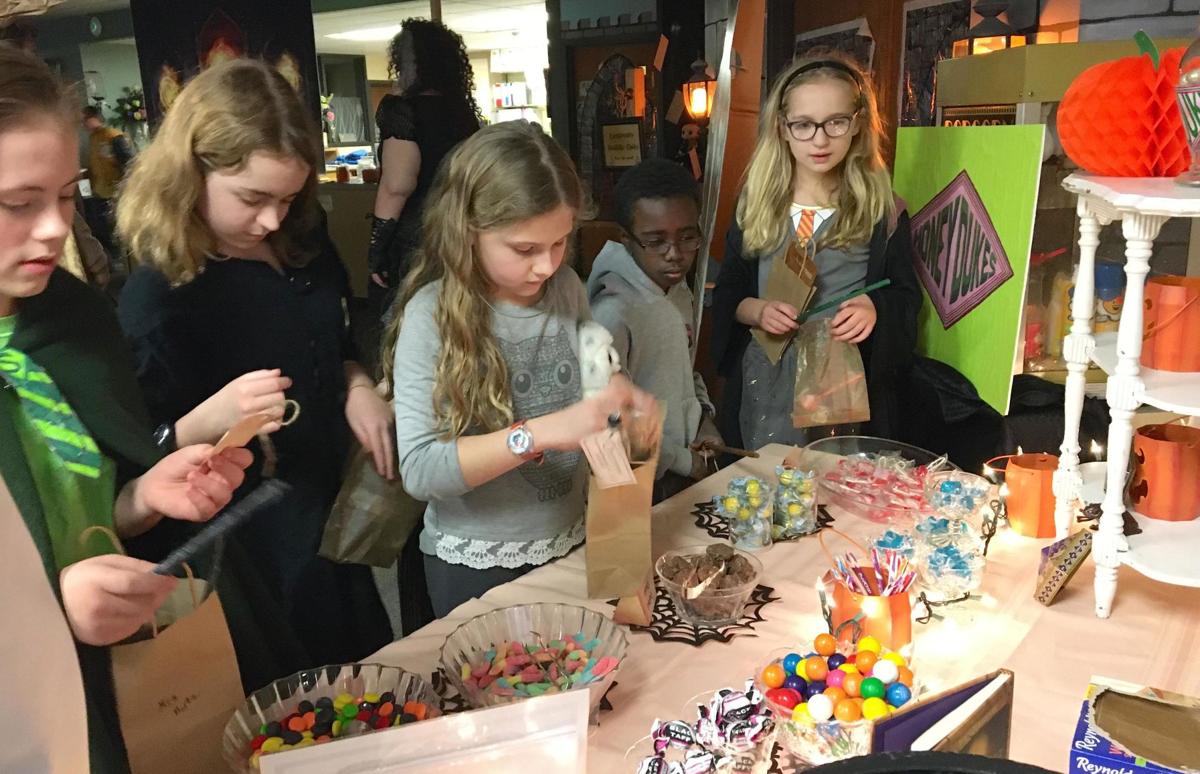 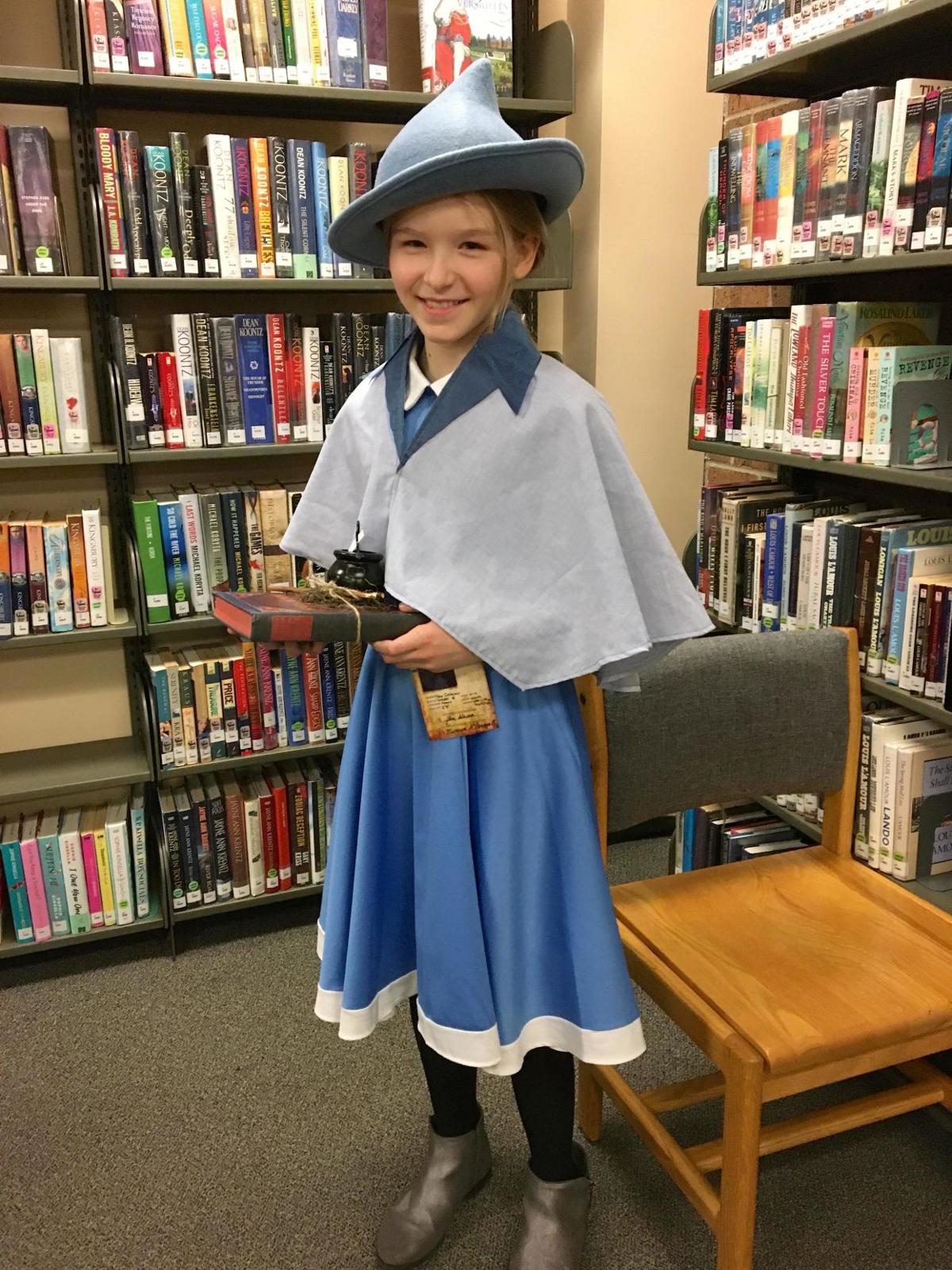 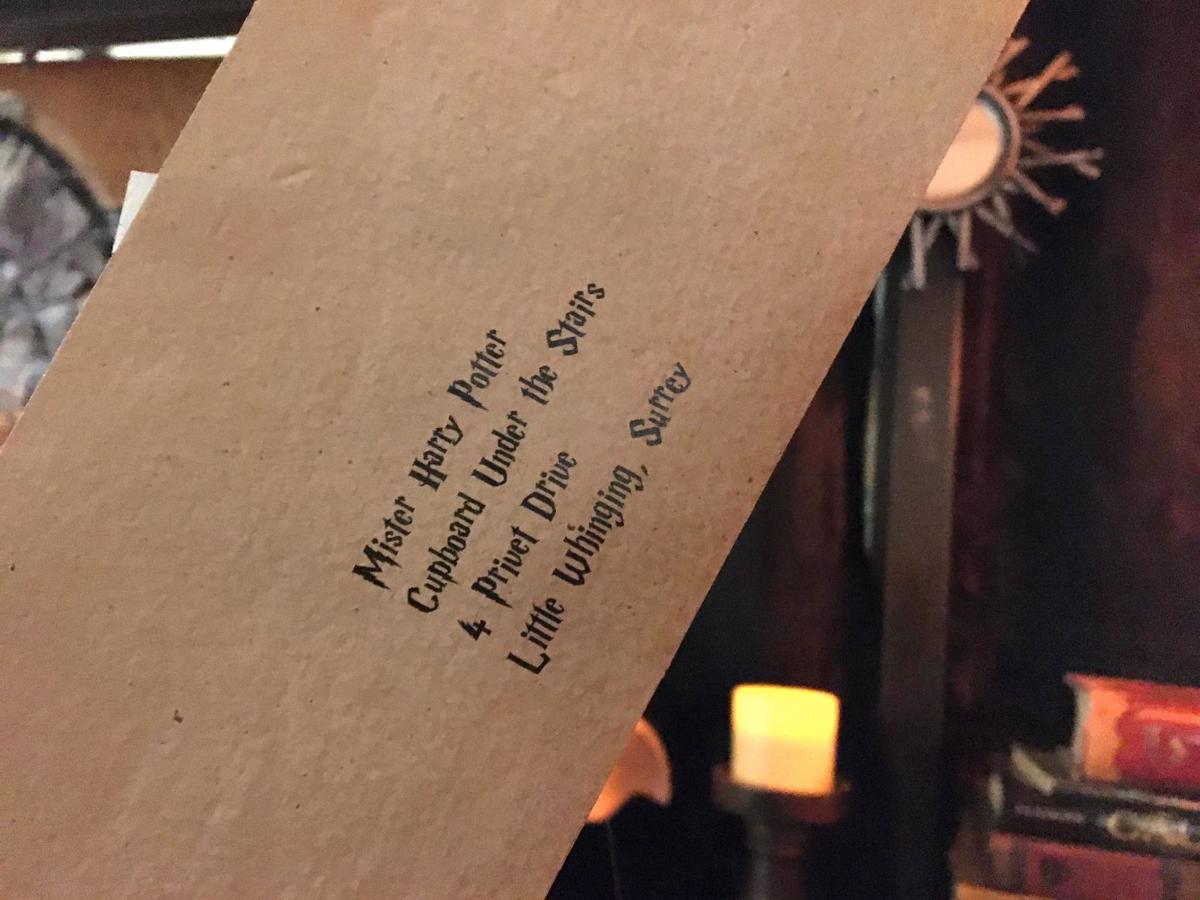 Harry Potter’s invitation to Hogwarts hung from the ceiling of the library. 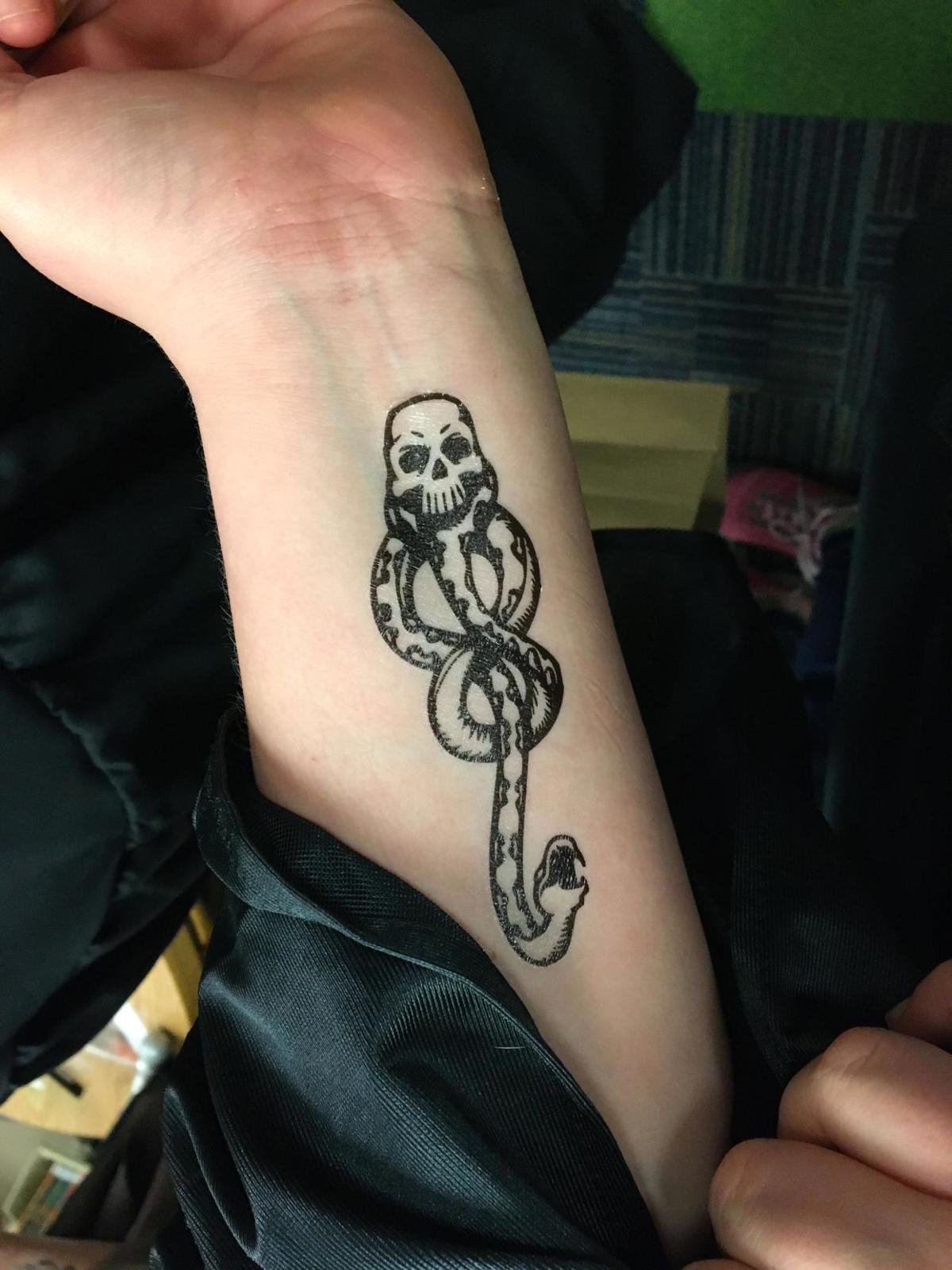 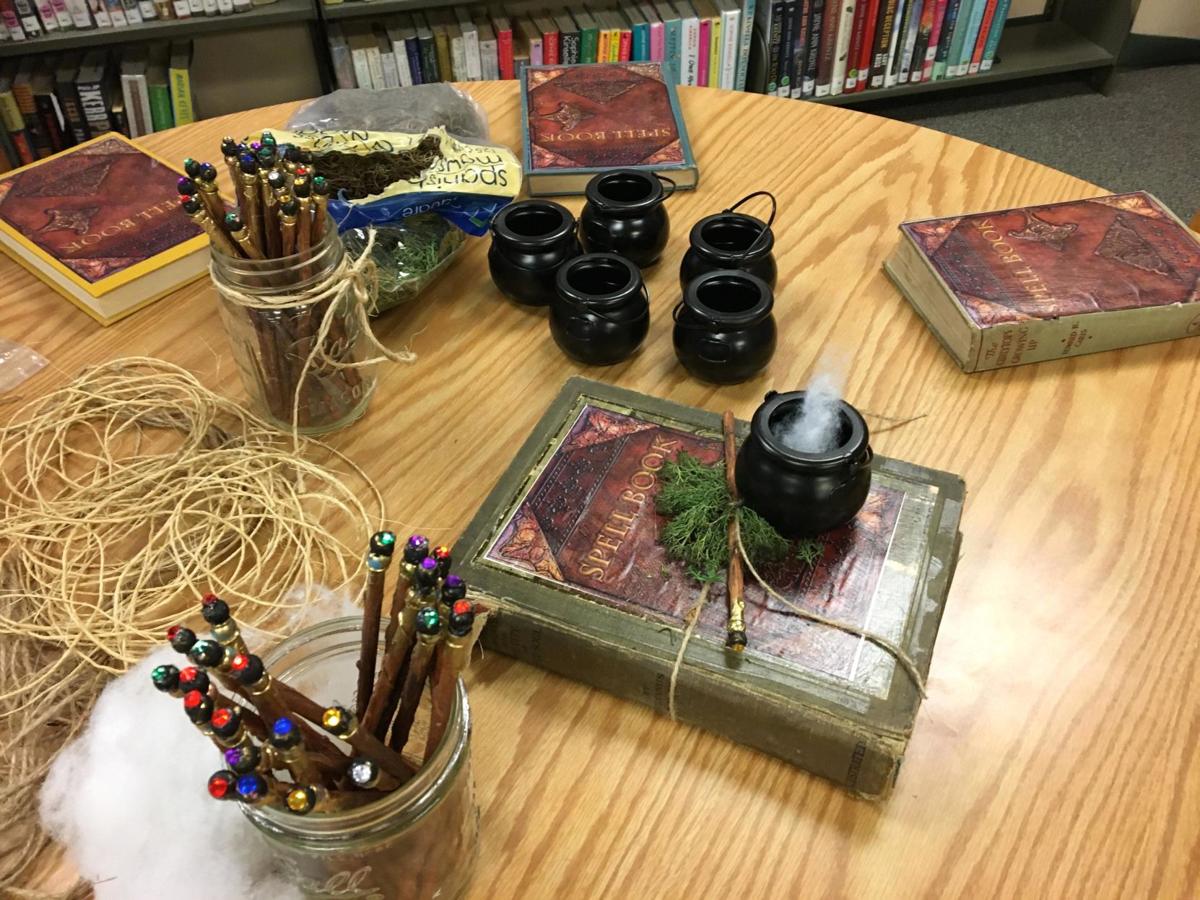 Students who attended "A Night at Hogwarts" made their own spell books. 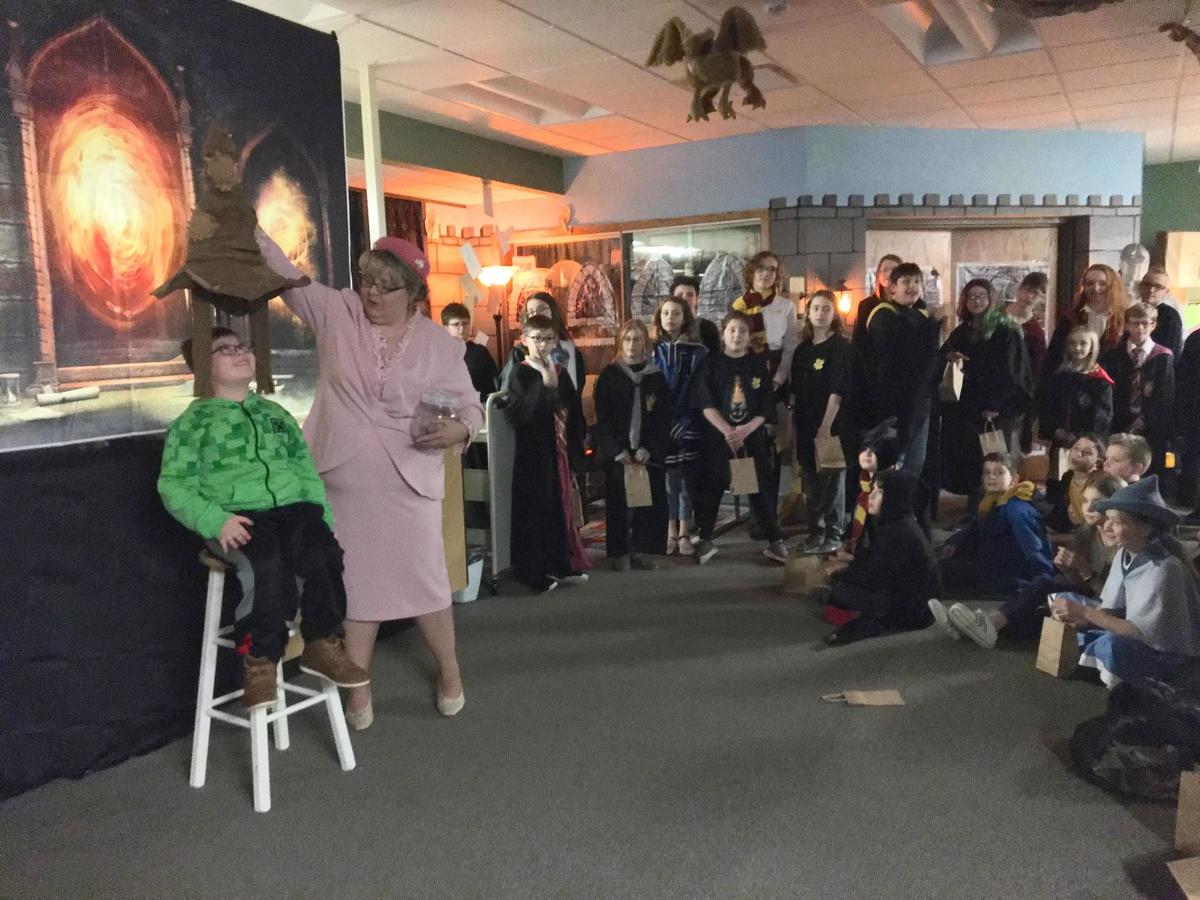 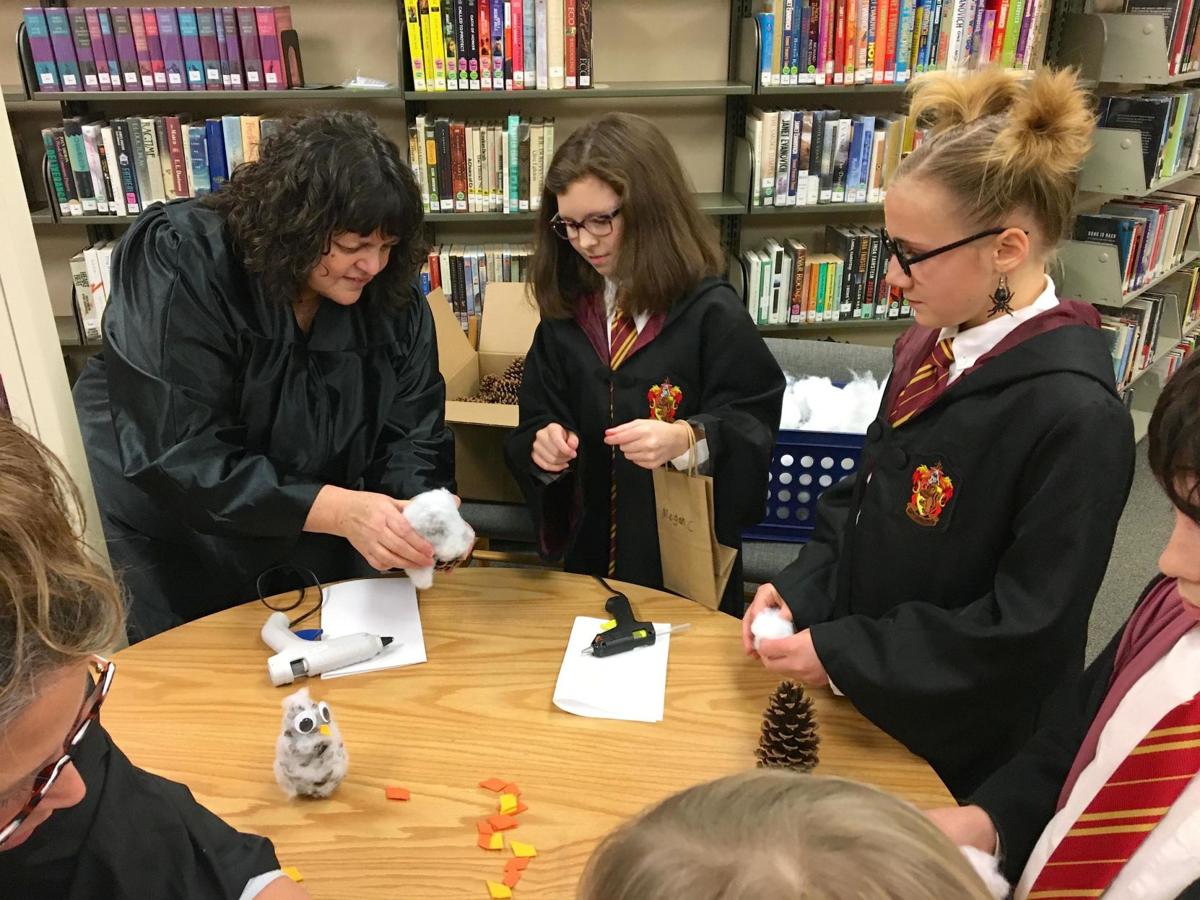 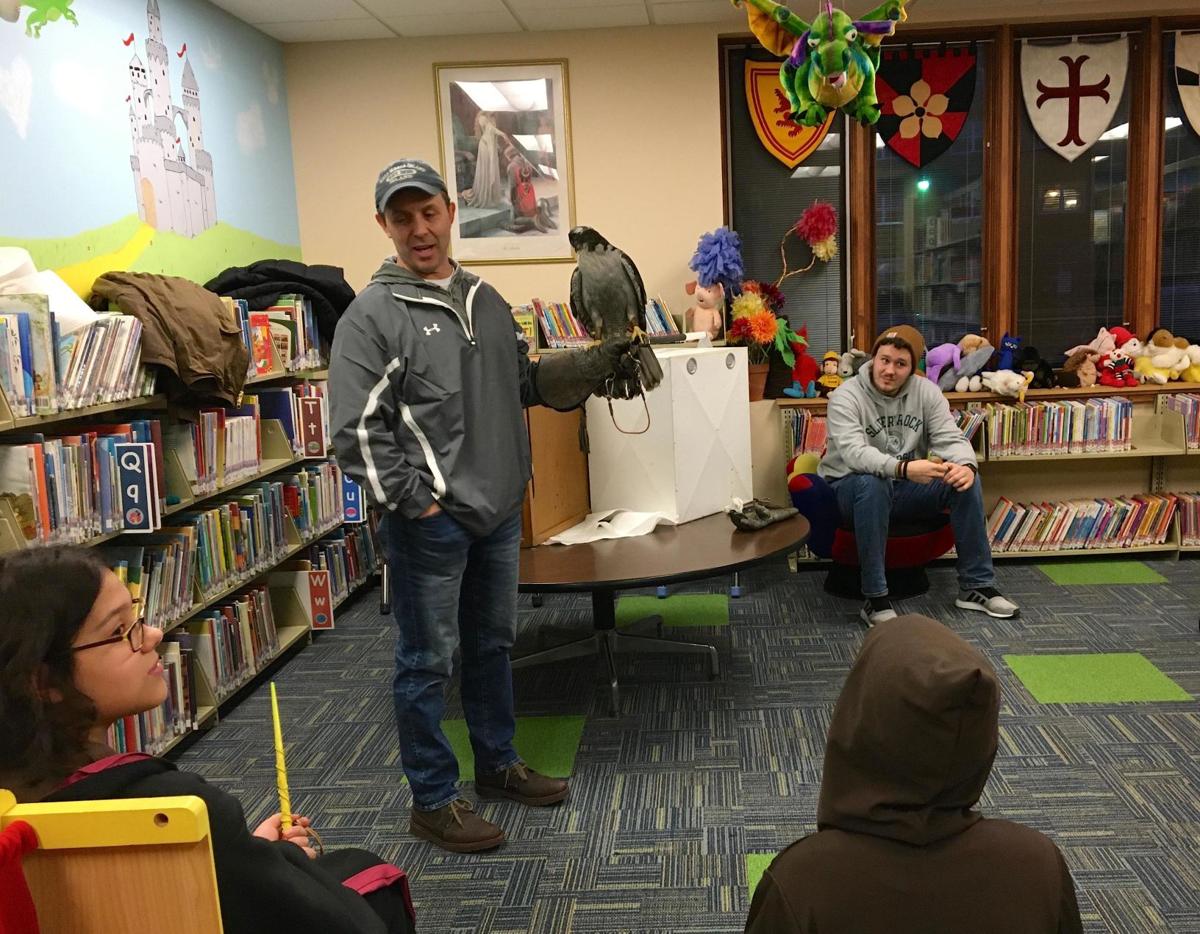 Dr. Jeffrey Finch talks about Willow, his North American Goshawk. He was joined by his son Sam, seated, and Sam's hawk named Maybe. 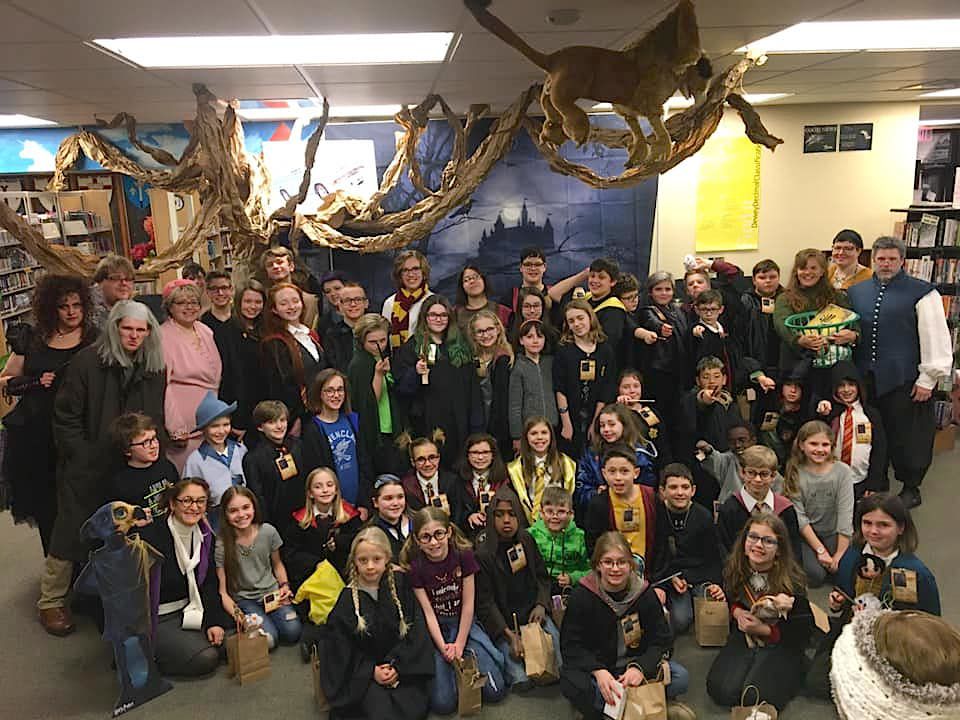 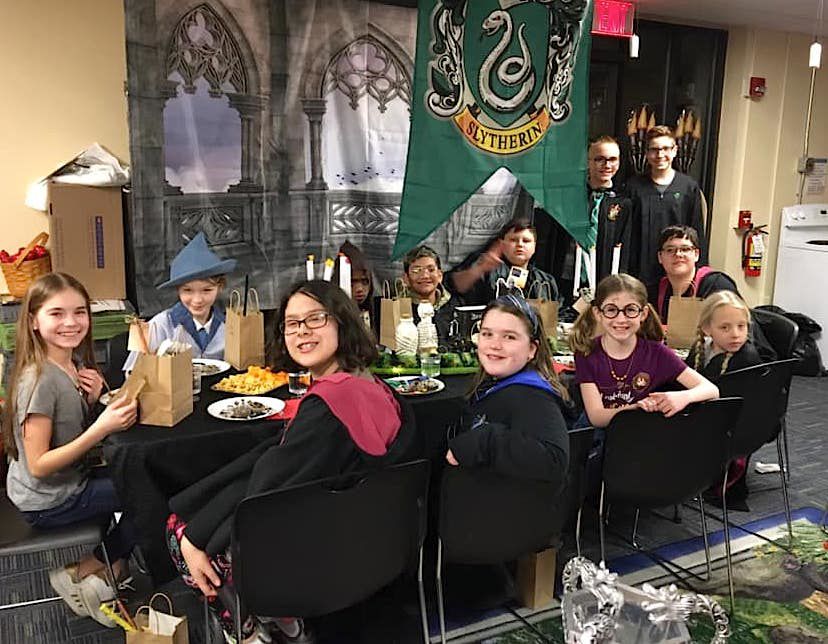 The students enjoyed some special treats in the Great Hall. 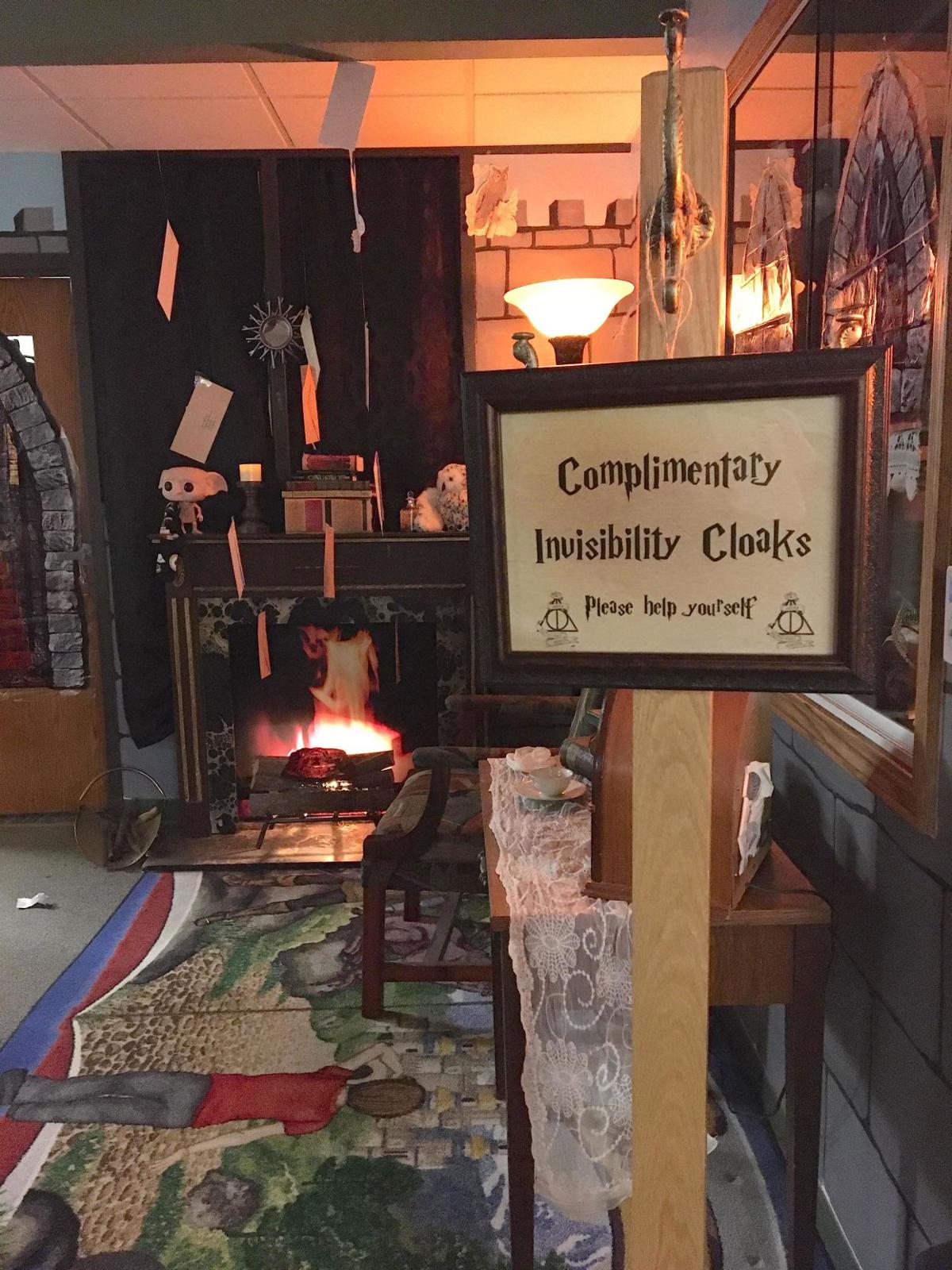 Harry Potter decorations were around every corner of the library. 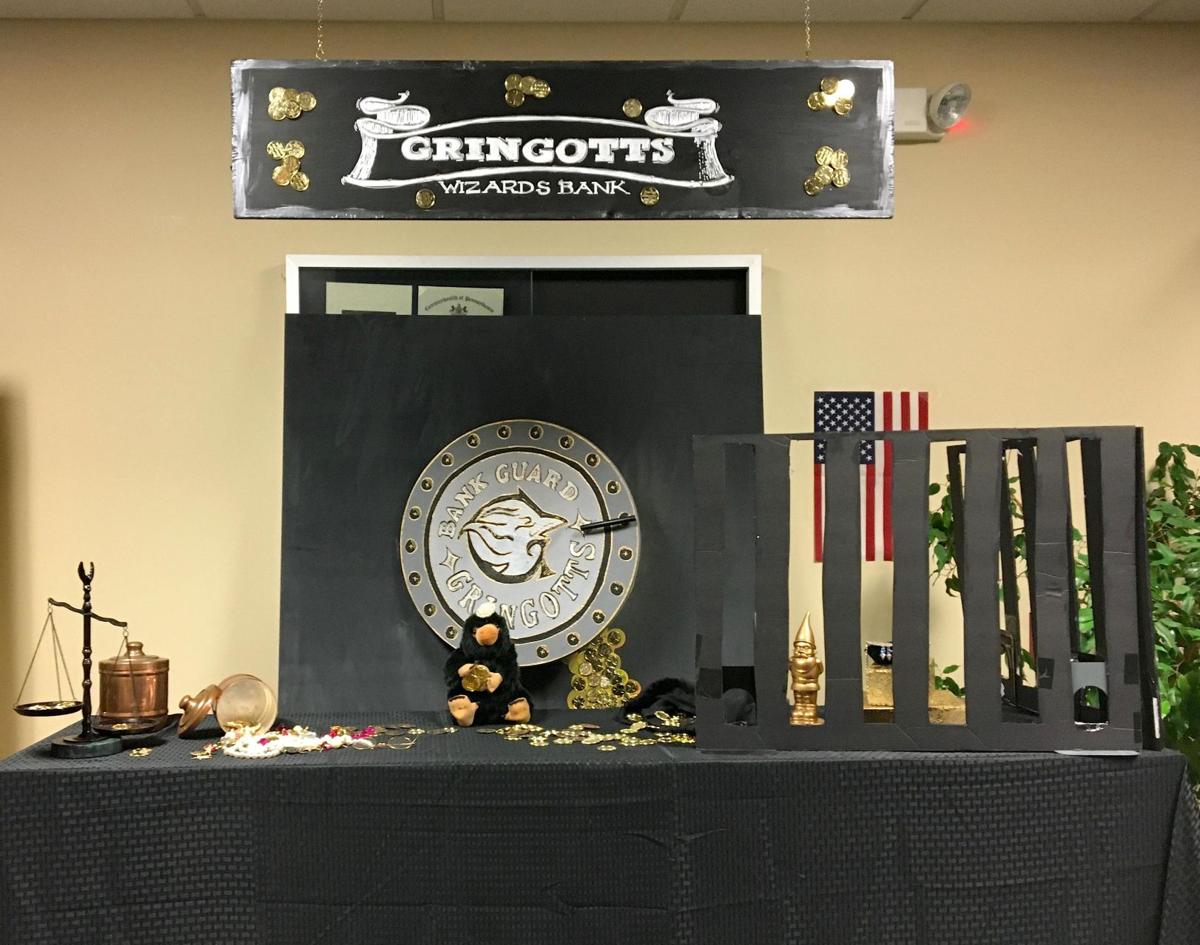 Harry Potter’s invitation to Hogwarts hung from the ceiling of the library.

Students who attended "A Night at Hogwarts" made their own spell books.

Dr. Jeffrey Finch talks about Willow, his North American Goshawk. He was joined by his son Sam, seated, and Sam's hawk named Maybe.

The students enjoyed some special treats in the Great Hall.

Harry Potter decorations were around every corner of the library.

The world of Harry Potter came to life Friday night at Grove City Community Library, where young witches and wizards gathered for “A Night at Hogwarts.”

She was assigning the children to their Hogwarts houses using the “sorting hat.” Each of the 40 students sat under the hat, which decided where they would end up at the Hogwarts School of Witchcraft and Wizardry – Gryffindor, Slytherin, Ravenclaw or Hufflepuff.

Mason Melzer, 9, of Harrsville, was excited to be sorted into Gryffindor, which is also the house that Harry Potter and his best friends belonged to in the popular book series and movie franchise.

Mason said that he and his family have been reading the J.K. Rowling books out loud together at home. He really enjoyed the library event, especially making an owl that he named “Charles.”

“We love everything. Miss Heather does such an amazing job,” said his mother Alaina Melzer.

Most of the attendees dressed up as their favorite character. Baker sported a pink suit, playing the role of Dolores Umbridge, who served as the strict headmistress of Hogwarts in “Harry Potter and the Order of the Phoenix.”

Baker handed out a handful of detention slips as the students made their way around the library, which was decorated with all kinds of Harry Potter memorabilia and handmade items.

The library has been hosting Harry Potter programs and events for quite a few years, and “A Night at Hogwarts” started in 2017.

It gets bigger and better every year with more elements and more excitement surrounding the big night.

“We’ve already started for next year,” Baker said of planning.

The countdown to the free event begins with Baker sending out invitations to the registered students; it is for kids in grades three through six.

Baker takes the Hogwarts letters to the post office along with a helper – a stuffed owl, which is a nod to the owls that deliver the mail in the stories.

The students entered the library through a curtain depicting Platform 9¾ at the train station, and they were pleasantly surprised to see that their library had been transformed into something magical.

Copies of “The Daily Prophet” hung around the room, and shelves were filled with mini cauldrons, spell books and potion bottles.

Hanging from the ceiling were candles made out of toilet paper tubes, and letters to Hogwarts with Harry Potter’s envelope addressed to the “Cupboard Under the Stairs” – the location of his bedroom before he he started attending the school.

After being sorted into their houses, the kids split into groups to check out the library’s version of Hogwarts.

They stopped at Ollivander’s Wand Shop to find just the right wand, and they had their photos taken for their student badges.

They made necklaces featuring the “Deathly Hallows” symbol, and created owls out of pinecones.

Kate Bovard, 11, of Grove City, who was wearing a robe that her grandmother made, had fun making the necklace and selecting her wand.

“I like how it’s adventurous,” she said of the event.

Robert Speice, 12, of Grove City, likes the books and movies, and the fact that the friendships carry on through each story.

The evening ended with a meal in the Great Hall featuring Hagrid’s Rock Cakes, Raven’s Claws and Hufflepuffs.

Dillon Pottinger, 10, of Grove City, enjoyed his first time at “A Night at Hogwarts.” He has liked studying the different spells in the Harry Potter books.

Arden Anderson, 12, of Grove City, was wearing a blue dress, cape and hat, portraying the character of Fleur Delacour, a witch.

Her mother helped her with the outfit, said Arden, who loves Rowling’s writing style.

Twenty-four volunteers, including library staff, assisted with crafts and leading the kids around the library for different activities.

Lily O’Rourke, 12, has attended the event several times. This year she served as a prefect, guiding the students through the activity stations.

“I thought it was really cool,” she said.

Sean Newton, the interlibrary loan officer, said he likes Harry Potter because it appeals to all ages.

It teaches important lessons like good versus evil in a way that stands the test of time.

“It lets your imagination soar,” he said, recalling a comment from Rowling about how the stories allow everyone to go to Hogwarts together.

Baker loves dressing up, and she enjoys being able to keep sharing the Harry Potter stories.

The library staff went the extra mile along with the volunteers and parents who offered to help.

“We have so many people to thank,” Baker said.