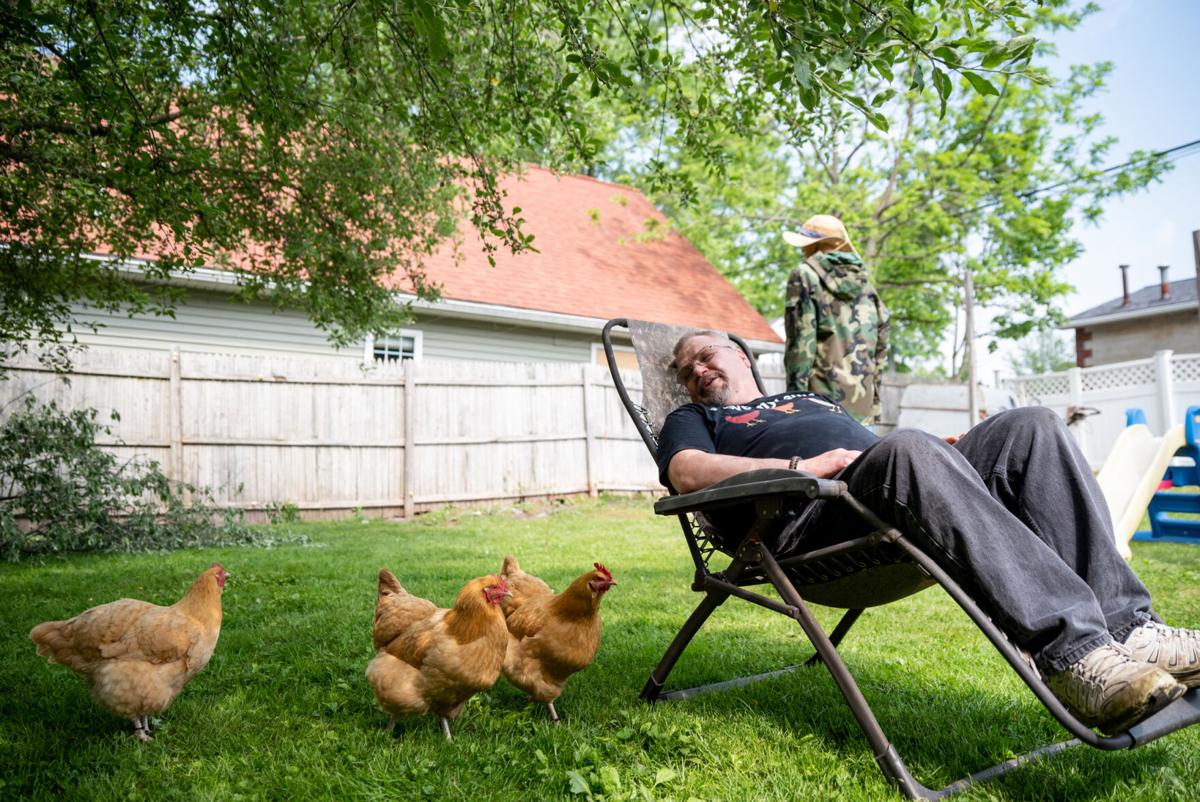 Don Huntington's chickens huddle around him when he sits in his backyard chair. 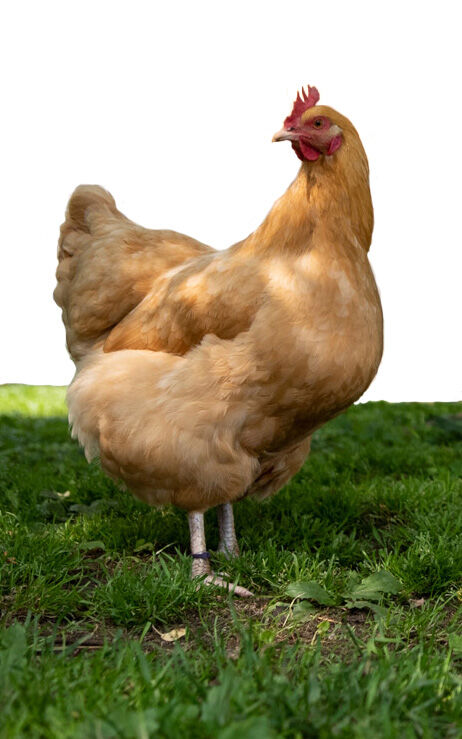 Chickens roam the backyard of Don and Brenda Huntington’s home in Grove City. 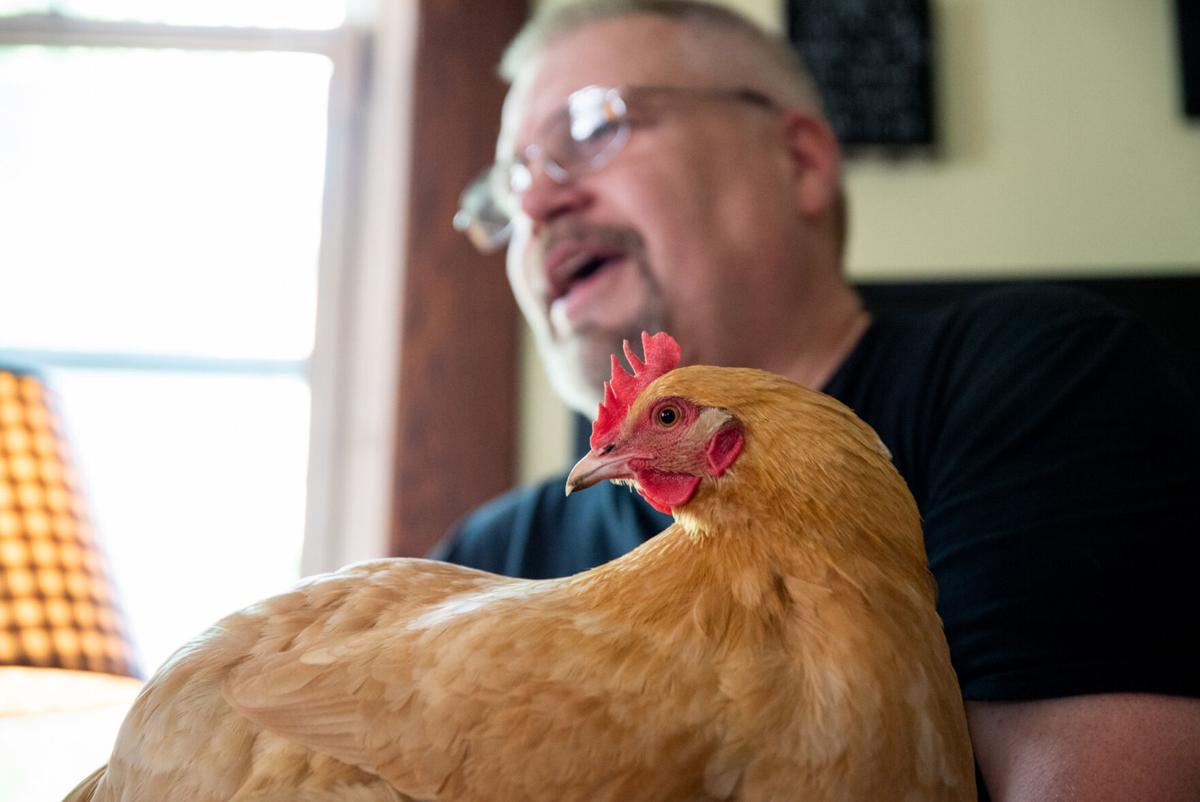 Don Huntington holds his pet chicken, Flora, at his home in Grove City.

Don Huntington's chickens huddle around him when he sits in his backyard chair.

Chickens roam the backyard of Don and Brenda Huntington’s home in Grove City.

Don Huntington holds his pet chicken, Flora, at his home in Grove City.

Wearing a T-shirt bearing images of chickens and the words “I love my ladies,” Don Huntington held Flora the hen, who sat quietly as he talked about how each of his seven hens has her own personality.

“Each one is unique,” his wife, Brenda, said, noting that Flora is the affectionate one.

The Grove City couple bought the Buff Orpington chickens in August from Grove City Agway, and they quickly became part of the family.

“That’s their little toy basket,” said Huntington as he stroked Flora in the living room of his Lincoln Avenue home.

The Huntingtons have raised the hens from one week old, and they were shocked when they learned about an ordinance that says chickens are not allowed in Grove City borough.

Huntington said he and Brenda’s bond with their chickens and support from the community have encouraged him to ask Grove City Council to change its regulations and allow them to keep their feathered friends.

The chickens don’t disrupt the neighborhood, he said.

“If someone’s out on the sidewalk, you’d never know I have chickens,” Huntington said.

Taylor Pokrant, the borough’s code enforcement and zoning officer, visited the Huntingtons after someone asked borough officials if borough residents were allowed to have chickens, and mentioned the hens.

Borough ordinance Section 151.12 reads, in part, “No cow, calf, swine, sheep, goat, chickens, geese or ducks shall be kept in any dwelling, part thereof, or yard.”

The Huntingtons said they looked at the “animal” sections in the list of ordinances but did not see any mention of chickens, and they’ve since had support from neighbors and other residents. Huntington created a public Facebook group called “Hens for Grove City,” which has just over 100 members, many voicing their support for the chickens.

Beside Flora, there’s Clara, Annabelle, Ellie, Bonny, Fiona and Maggie, and Huntington said they all have different personalities and lay up to seven eggs a day.

The ordinance that prohibits chickens was adopted in 1965 and has been updated a few times. Pokrant said the rule is intended to keep farm animals out of the borough out of concerns about noise, space and upkeep.

The existing ordinance means the Huntingtons have two options — rehome the hens in a municipality that allows chickens, or try and work with the borough on updating the ordinance, Huntington said.

“They could certainly propose it,” Pokrant said.

Council has previously declined to consider changing the ordinance. In 2012, a family asked an update that would allow them to raise backyard chickens, according to Allied News archives. The measure failed after no council member seconded a motion to allow chickens.

The Huntingtons plan to address council at its next meeting, 7 p.m. June 21. They want the borough to consider a change that would allow residents to have chickens as long as they meet certain conditions regarding care and maintenance.

Raising backyard chickens is a commitment, so an update could include a permit and fee, Huntington said.

The Huntingtons, who have five grown children and five grandchildren, have lived in their home since 2001. He said the neighborhood already houses businesses that are more noticeable than his chickens.

Hall Industries recently took over the former Cooper Industrial Commons property, some of which is across from their home, and there is also a funeral home and brewery nearby.

The Huntingtons haven’t heard any noise complaints about the hens – which do not crow like roosters.

He said they would be disappointed if they have to find a new home for the hens, who live in a fenced backyard, where Huntington devoted time and money in a chicken coop equipped with its own guard — a mannequin named “Frank” meant to keep hawks away.

The hens also spend time in the Huntingtons’ house, so they feel more like pets, said Huntington, a Marine Corps veteran and retired corrections officer.

Brenda said she appreciates the eggs. She has several medical conditions that make eating difficult. The eggs give her no trouble because she knows where they came from – her own backyard.

The hens keep weeds at bay and eat ticks and other insects that could pose health issues for the Huntingtons.

But most importantly to Huntington is the fact that they’ve improved his quality of life. For him, the T-shirt says it all.