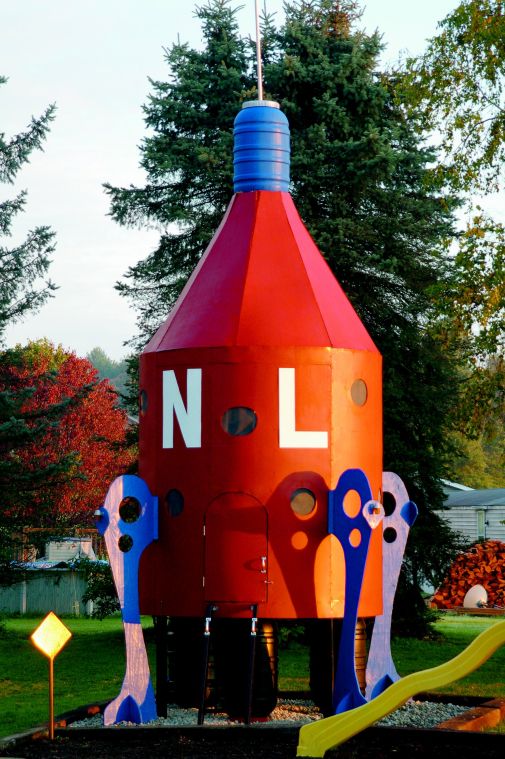 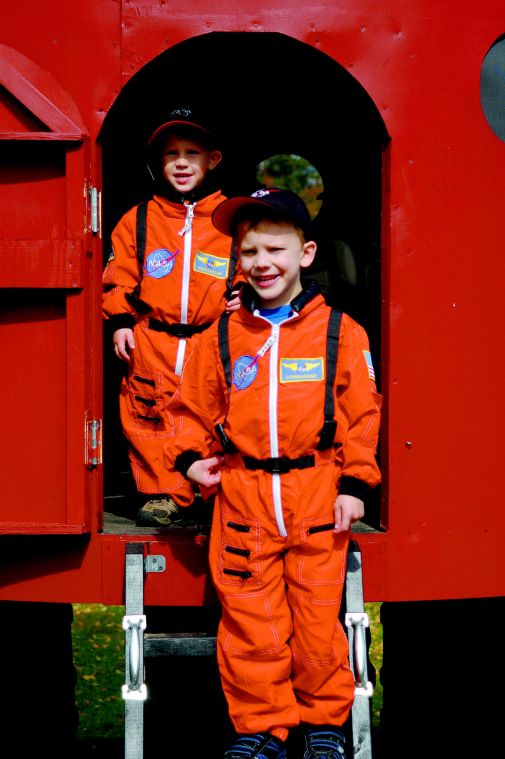 Will it take off? No.

But, to these junior astronauts that really doesn't matter.

Nicholas 5, and Lucas, 3, are the flight crew for the N-L rocket on Marstellar Road, Fairview Township.

With a fascination for rockets, space and aircraft, the young boys and their parents, Dan and Barb Savolskis, built a rocket in their yard - a 25-foot-tall rocket.

Dan is known in the area as a musician, accomplished trumpet player and art director for the Guthrie Arts Guild as well as an accountant.

But this project brought out his engineering skills. He began with a crayon drawing of a rocket ship and the project took on a mind of its own.

The resulting rocket has four engines, a hatch, 12 windows and special instrument panels on each level.

"If I start something, I have to keep at it until it is done," Dan said.

"I have a talent for re-purposing things," said Dan Savolskis as he talked about the project.

That was a good thing because most of the items that give the project functionality have been recycled from things they gathered.

"Nicholas likes to build things," Dan said. "He builds things with his grandpa, who was a contractor."

So expanding that theme, Dan and Nicholas started to round up things that they could use.

Dan found the Internet very helpful. He located large plastic food-grade barrels that would become the engines and nose cone.

Because the barrels had not been used for any toxic substance, they were safe to use. Once they were cleaned out and got a coat of plastic- adhering paint that fit the bill.

The wheel on the inside of the hatch was from a child's pedal car.

As they started to search for things, Nicholas asked his aunt and uncle if they had anything that could be used inside the rocket. They are former dairy farmers and had dials, switches and other things they were no longer using.

"Nicholas and I visited the mechanic in the neighborhood," he said. "We asked if we could look for things in the field of old cars. We took Nicholas' red wagon and walked between the cars."

They found the seat of a van, the dashboard of a Chevy, all kinds of dials and switches.

"I asked what we owed and the guy said that we didn't owe him anything. He hadn't had this much fun for years," Dan said.

Every project needs a strong foundation.

After pulling out a large shrub, four supporting posts were anchored three feet into the ground with cement as the support.

"We've had several storms since the rocket was finished," he said. "It isn't going anywhere."

The most challenging part of the project was making its cylindrical shape and sizing and cutting out the panels that make up the nose of the rocket.

It was determined that the rocket would be red in the original drawing but when Dan painted the engines black, Nicholas wasn't too sure about that since the ones in their drawing were blue.

"It really slowed things down when the boys helped but I wanted them to be a part of the project," he said. They helped paint, counted out bolts and screws and served as go-fers.

In August, the family took a long weekend to Washington, D.C. to the Smithsonian's Air and Space Museum on the Mall. They also visited the Steven F. Udvar-Hazy Center near Washington Dulles International Airport.

The two sites together show case the largest collection of aviation and space artifacts in the world.

Everyone had a great time and they did "research" on what should be inside of the rocket. While on their trip to Washington Dan and Barb bought the boys their orange jumpsuits.

The size of the van seat determined the diameter of the body of the rocket. There are "controls" on each level. A ladder leads up to a loft that has a safety rail.

The project took about six weeks to complete and culminated with a rocket party so all their friends and helpers could see the end result.

People driving by slowed down to see what was being built.

"One person in a pickup was driving by slowly then backed up and asked 'what is it?'" Dan recalled.

Now, with the leaves off the trees, the rocket ship can be seen from District Road.

When Nicholas and Lucas have friends over, they want to play in the rocket but that is only part of the play area that includes the more typical sand box and swing set.

"Barb asked, 'what do we do with it if we move?' I told her it goes with the house."

Like any great project, the path to completion is half the joy of the results.