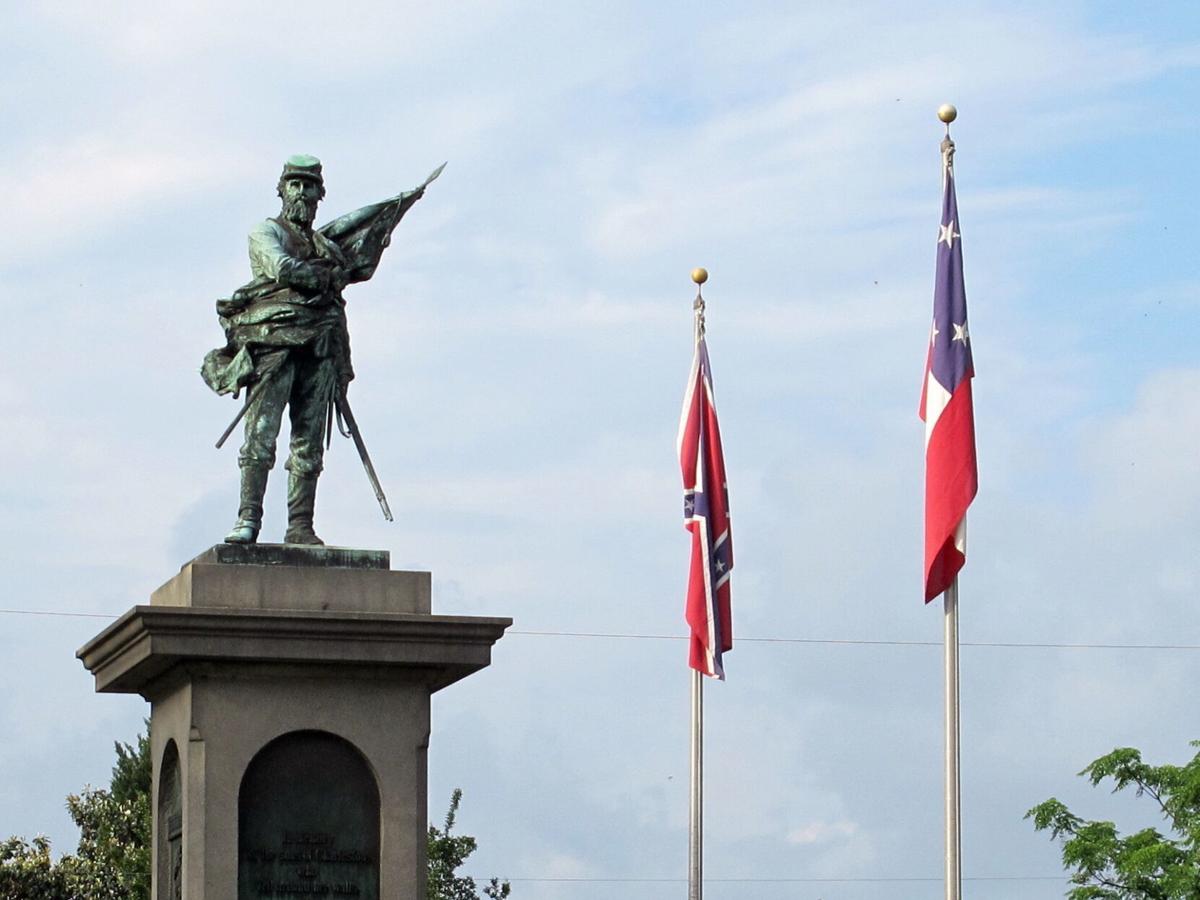 Confederate flags fly near a monument at Magnolia Cemetery in Charleston., S.C., on Tuesday, May 10, 2016. On this day in 1863, Confederate Gen. Thomas "Stonewall" Jackson died. May 10 is observed as Confederate Memorial Day in the Carolinas. (AP Photo/Bruce Smith) 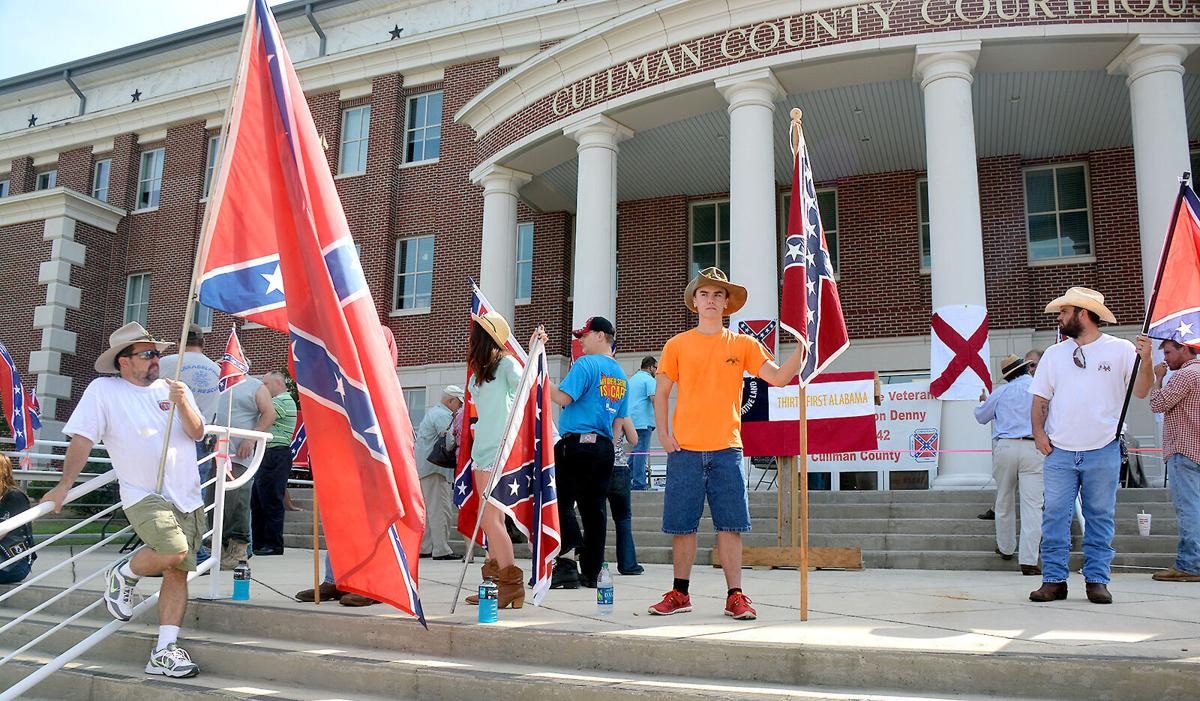 Confederate flags fly near a monument at Magnolia Cemetery in Charleston., S.C., on Tuesday, May 10, 2016. On this day in 1863, Confederate Gen. Thomas "Stonewall" Jackson died. May 10 is observed as Confederate Memorial Day in the Carolinas. (AP Photo/Bruce Smith)

Fourteen U.S. congressmen opposed making Juneteenth a national holiday in Wednesday’s vote. Many of them represent states that continue to observe Confederate holidays.

While Juneteenth has been observed in some Black communities since 1866 and was first recognized by the state of Texas in 1980, it has taken more than 150 years for lawmakers to set aside the day as a federal holiday.

Meanwhile,. some Southern states have observed Confederate holidays since the end of the Civil War.

One of the more common state observations is Confederate Memorial Day. Begun in Georgia in April 1866 to commemorate the deaths of Confederate Soldiers on the anniversary of Confederate General Joseph Johnson’s surrender to Union General William Sherman in Bennett Place, N.C., the state holiday soon spread to the other 10 Confederate states.

Georgia ended its practice of giving state employees a day off in April for Confederate Memorial Day in 2015 after white supremacist Dylann Roof killed nine people at a Black church in Charleston, S.C. Then-Gov. Nathan Deal quietly changed the state holiday calendar to create a generic “state holiday” for employees in April. He also changed the state’s holiday for Robert E. Lee’s birthday to a paid day off the day after Thanksgiving.

South Carolina remains one of three states that continue to provide employees with paid time off for Confederate Memorial Day. Mississippi and Alabama are the others.

Alabama is the last state to have a legal holiday set aside solely to commemorate the birth of Confederate President Jefferson Davis. Mississippi marks Davis’ birthday but includes it in the Memorial Day celebration. In Texas, Davis’ birthday is part of “Confederate Heroes Day” while other Southern states, including Florida, Kentucky and Tennessee, have a holiday for Davis on the books but do not give employees a day off.

Alabama and Mississippi are also the last two states to have a combined MLK, Jr/Robert E. Lee holiday in January, in observation of the January birthdays of civil rights leader Martin Luther King, Jr. and Confederate Army General Lee. Legislation introduced in Alabama this year to move Robert E. Lee Day to Columbus Day did not make it out of committee.

Congressman Mo Brooks, one of the two Alabama representatives who voted against the Juneteenth national holiday, said he did so because of concerns about the cost to taxpayers of an additional holiday for federal employees.

“The cost should have been offset by eliminating one of the other holidays so that taxpayers don’t once again have to foot the bill for paying millions of people not to work,” he told Al.com.

A spokesman for Brooks did not respond to questions asking if the congressman had similar concerns about the cost to state taxpayers for the multiple Confederacy-related holidays in Alabama.

He also told Al.com that while the end of slavery, “ought to be celebrated as much as the 4th of July,” he said the bill “should have been celebrating the Emancipation Proclamation or the passage of the 13th, 14th or 15th amendments or the end of the Civil War, any of which would have been dates of national significance rather than a date apportioned in one state.”

Mississippi state Rep. Charles Young, a Democrat, said remembering those events are useful teaching tools and that history should be promoted and protected even if it is "good, bad, or indifferent."

“I think us having a well-documented history is beneficial for everyone,” he said.

Mississippi state Senator Jeff Tate, a Republican, said there has not been a discussion about eliminating Confederate Memorial Day as a state holiday. "For over 105 years Mississippi has recognized the last Monday in April as Confederate Memorial Day to honor those Confederate soldiers that were killed during their military service," he said. "I have not had any talks with any member of the legislature to make changes to this tradition that is more than a century old."

In Texas, employees for the state of Texas can take Jan. 19 off for Confederate Heroes Day or choose another day in the calendar year to take off. State offices remain open on that day.

Two Texas Congressmen, Chip Roy and Ronny Jackson, were among the Republicans voting against the Juneteenth National Independence Day Act despite it being a Texas state holiday since 1980.

Roy said he supports celebrating the anniversary of the day slaves in Galveston were finally informed by Union army General Gorden Granger that they’d been emancipated, but said the name of the holiday was divisive. “I could not vote for this bill . . . because the holiday should not be called ‘Juneteenth National Independence Day’ but rather, ‘Juneteenth National Emancipation [or Freedom or otherwise] Day.’ This name needlessly divides our nation on a matter that should instead bring us together by creating a separate Independence Day based on the color of one’s skin,” he said in a statement.

In recent years, several states have dropped their celebrations of Confederate leaders. For more than 100 years, Virginia celebrated Lee-Jackson Day in January, honoring Robert E. Lee and Thomas “Stonewall” Jackson. In 2020, three years after white supremacists protested the removal of a Confederate statue and a woman counter-protestor was killed in Charlottesville, the state removed Lee-Jackson Day as a state holiday.

In 2017 Arkansas Republican Gov. Asa Hutchinson led the push to stop celebrating Lee on the same day as King, saying it was bad for the state’s image and forced a “false choice” between the two men. He told NPR, “To be quite honest, I expected this debate would divide us. But instead, during the debate, we listened to each other, and the conversation brought us together.”

As the number of states celebrating Confederate holidays has decreased, state recognition of Juneteenth has increased. As of this year, 48 states observed Juneteenth with a handful designating it as a state holiday.