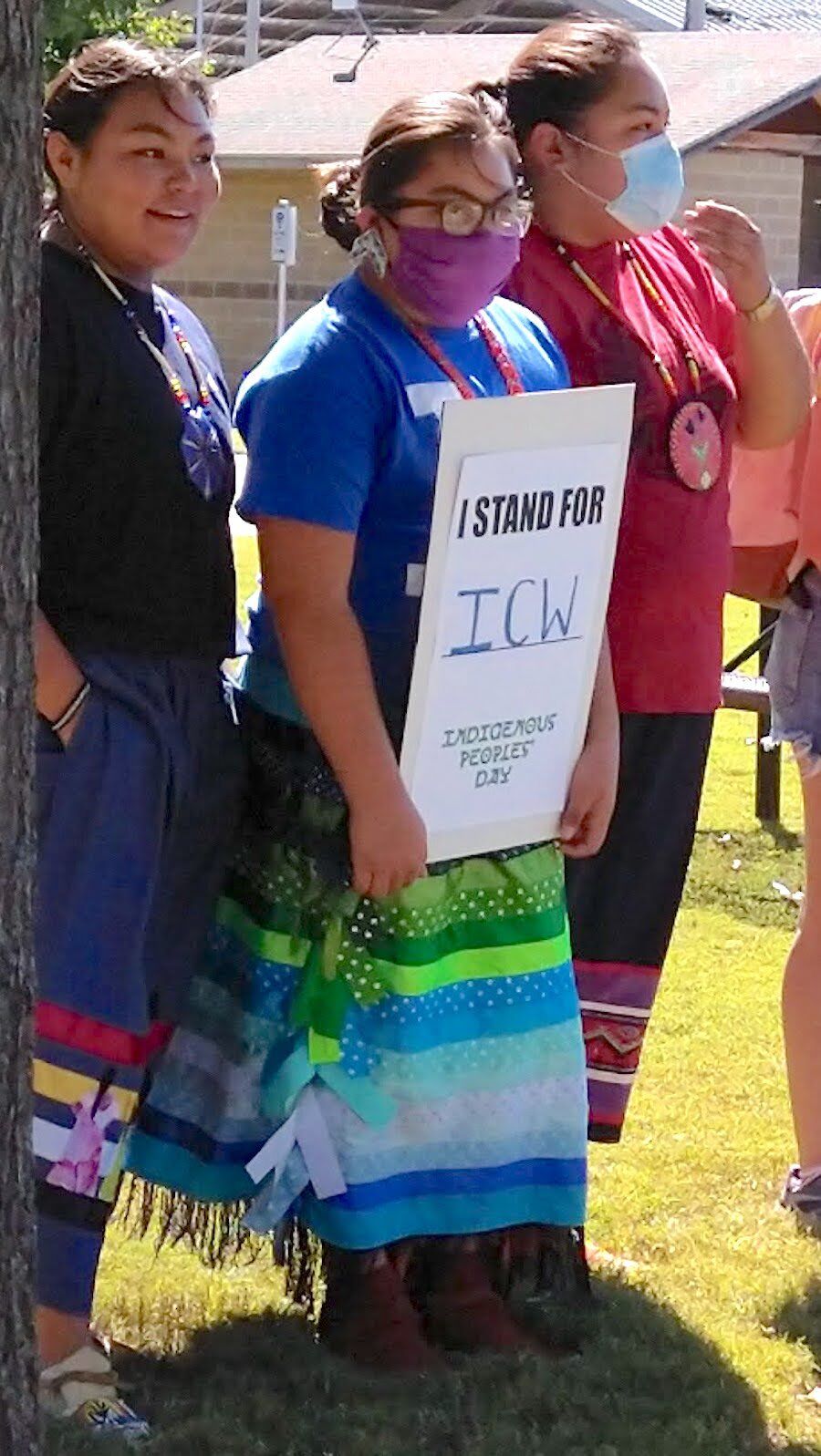 The Stroud-Littlecook sisters of Tahlequah walked from Northeastern State University to Norris Park to show support for Black Lives Matter and others during the NSU Stand in Solidarity Indigenous Peoples' Day event. From left are: Tessa, Sara, and Nicollette. 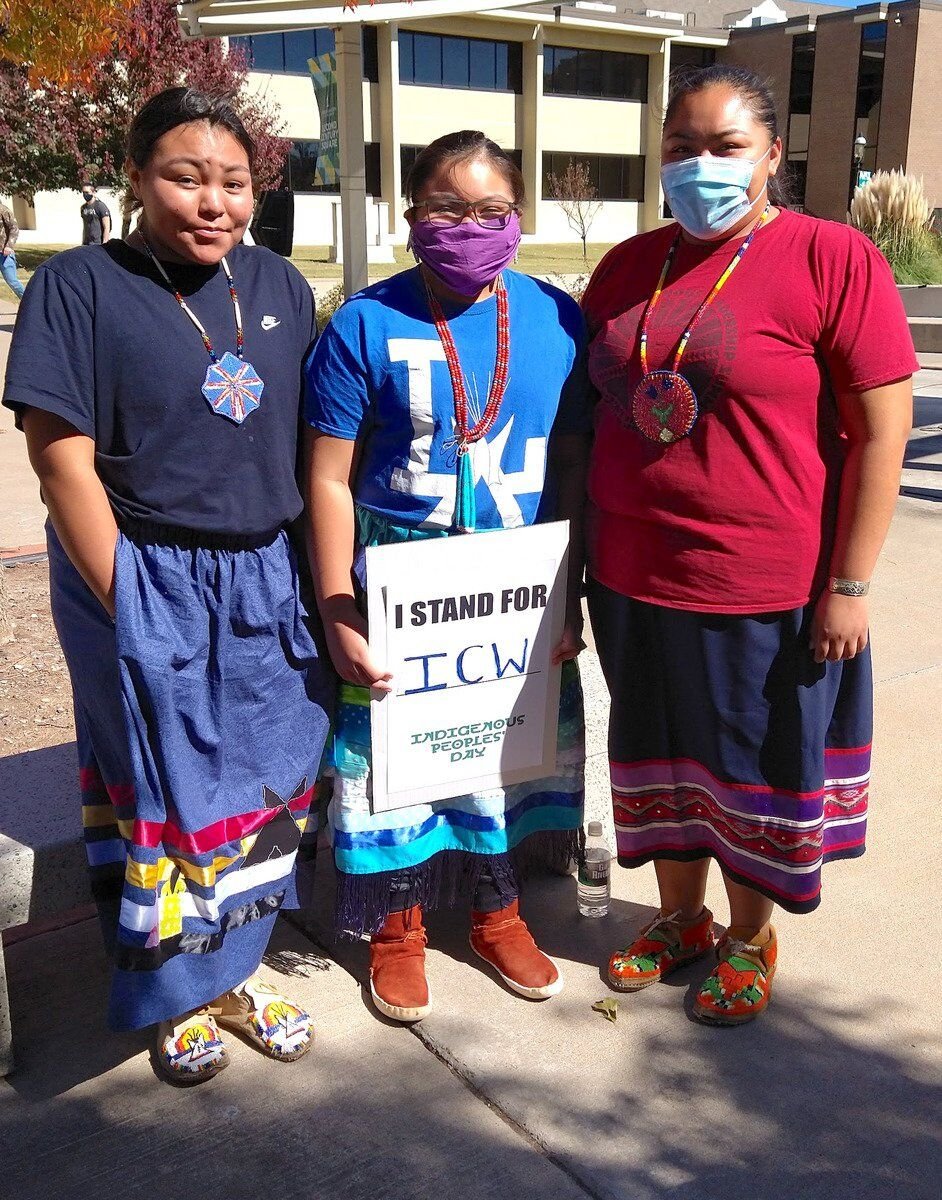 The Stroud-Littlecook sisters of Tahlequah attended the Stand in Solidarity Indigenous Peoples' Day event at Northeastern State University. From left are: Tessa, Sara, and Nicollette. 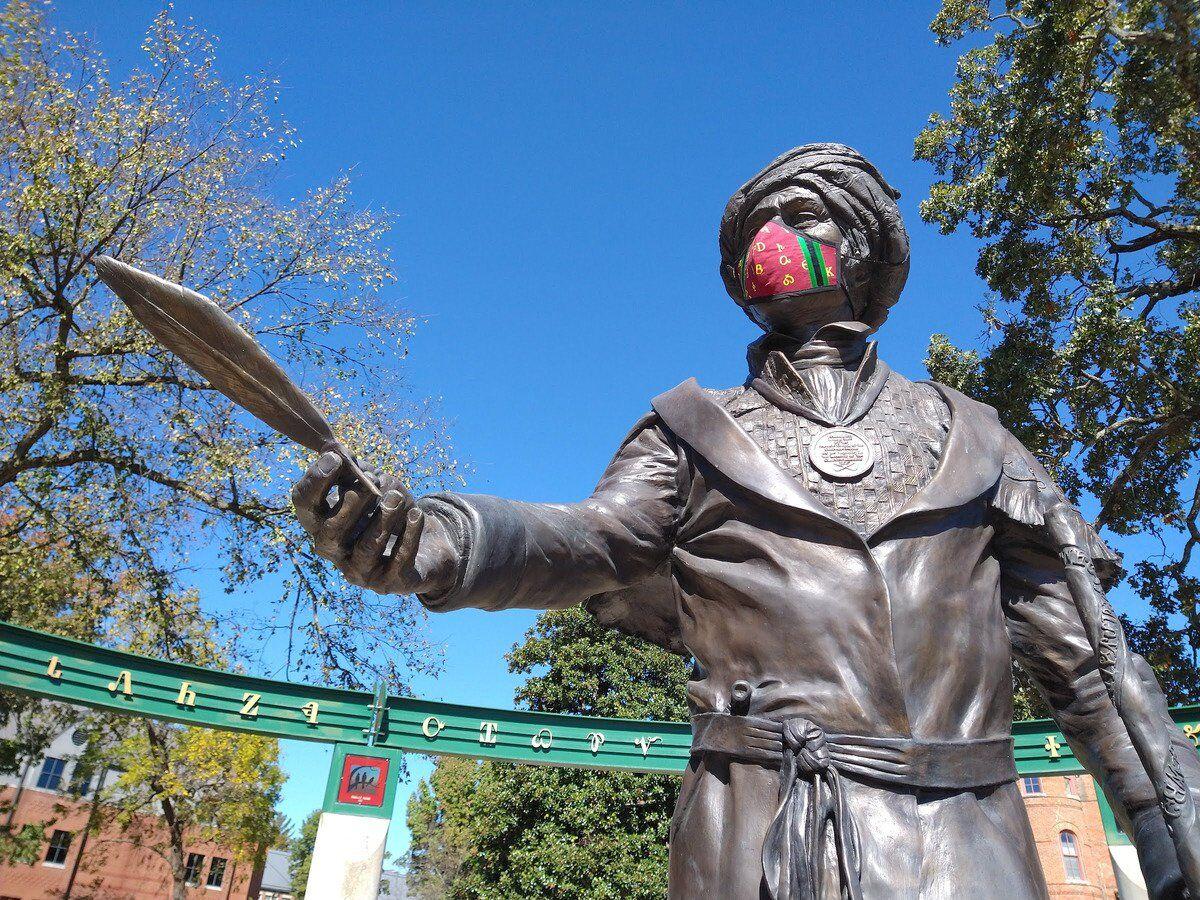 The statue of Sequoyah wears a mask designed by Cherokee artist Kenny Glass. It was unveiled during the Indigenous Peoples' Day event at Northeastern State University. 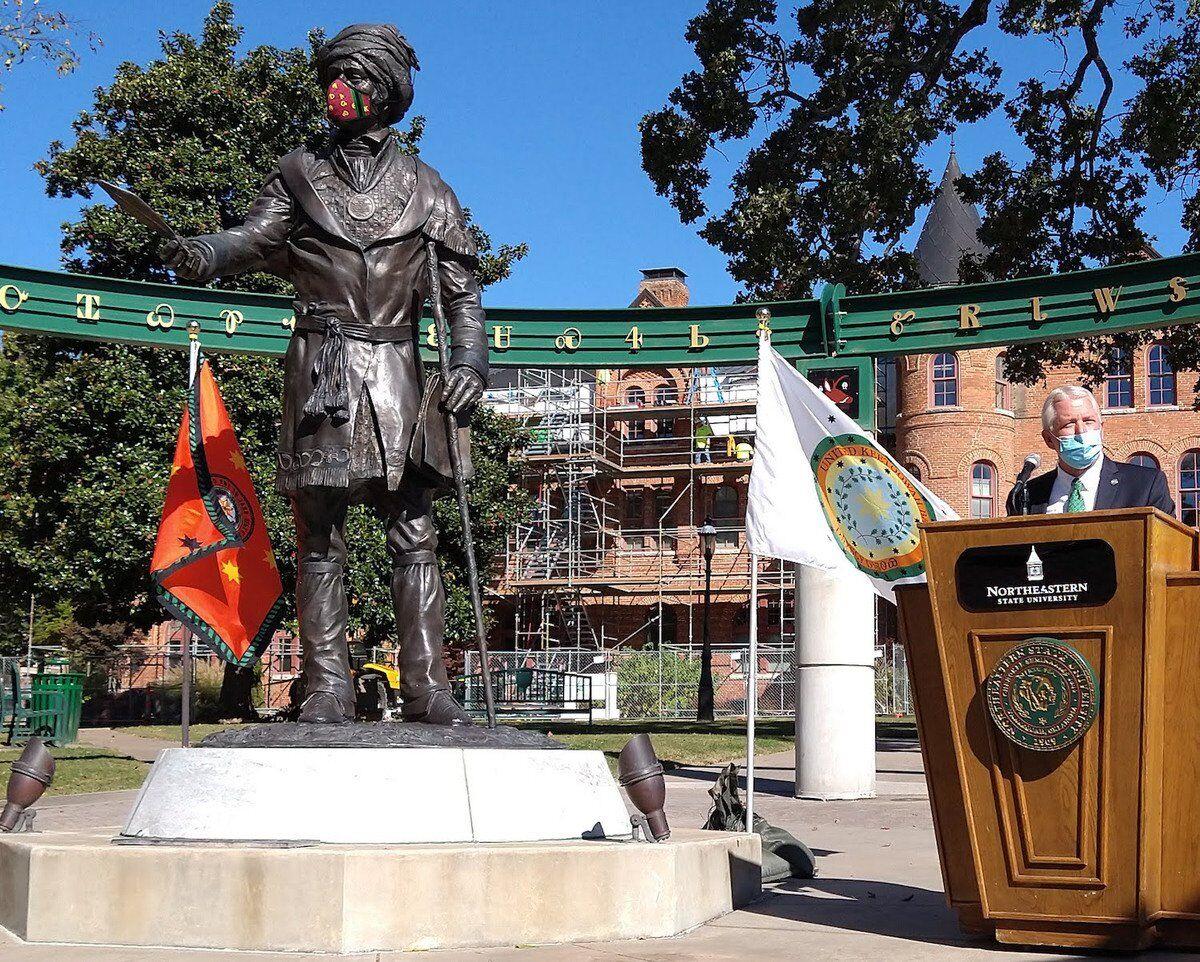 The Stroud-Littlecook sisters of Tahlequah walked from Northeastern State University to Norris Park to show support for Black Lives Matter and others during the NSU Stand in Solidarity Indigenous Peoples' Day event. From left are: Tessa, Sara, and Nicollette.

The Stroud-Littlecook sisters of Tahlequah attended the Stand in Solidarity Indigenous Peoples' Day event at Northeastern State University. From left are: Tessa, Sara, and Nicollette.

The statue of Sequoyah wears a mask designed by Cherokee artist Kenny Glass. It was unveiled during the Indigenous Peoples' Day event at Northeastern State University.

Although Oct. 12's official federal holiday was Columbus Day, in several northeastern Oklahoma communities, it was Indigenous Peoples' Day. And in Tahlequah, the celebration also shone a spotlight on the Black Lives Matter movement and the COVID-19 pandemic.

In Tahlequah, Northeastern State University Center for Tribal Studies and NSU Native American Support Center, along with other organizations and offices, hosted Indigenous Peoples' Day events, beginning at Centennial Plaza in front of Seminary Hall. The building originally housed the Cherokee Female Seminary, constructed in the wake of the Trial of Tears, and is now the heart of the NSU campus.

Campus participants rose to the theme of "Stand in Solidarity," and NSU representatives and local civic leaders called for the community to continue to wear face masks to help control the spread of COVID-19. As a symbol of that commitment, a mask was placed on the statue of Sequoyah, who is credited with creating the Cherokee syllabary.

"We want to recognize our heritage and the sovereignty of Native tribes," he said.

Speaking of resilience, resolve, and perpetual renewal, Turner credited the Cherokee Nation for establishing the original Male and Female Seminaries. He recapped the history of the schools, leading to the current state of NSU – including the renovation of Seminary Hall, to which the Cherokee Nation has contributed.

"If not for the Cherokee Nation, NSU would not exist," said Turner.

Drawing back to the theme of the masked Sequoyah statue, Turner remarked that of the three cities where NSU has campuses, Tahlequah is the only one with a mask mandate.

"We're thankful for that. Wearing a mask is the best vaccine we could have at this time," he said.

Turner recalled that he had talked with Cherokee Nation Principal Chief Chuck Hoskin Jr. in July about masking Sequoyah. They both agreed that knowing Sequoyah's history and intelligence, he would have been one of the first to put on a mask.

"We must be concerned about the welfare of others and look out for others, and keep wearing our masks," said Turner. "We're glad to allow Sequoyah to continue to communicate to the community."

The idea of the mask on Sequoyah came from the next speaker: Camerin Fite-James, NSU student body president and member of the CN Tribal Youth Council.

"He now serves as a larger-than-life role model," said Fite-James.

Along with honoring Indigenous peoples and cultures, the resolution the student government passed acknowledges that Native Americans have been disproportionately affected by the coronavirus.

Sequoyah's mask, Fite-James explained, was designed by Cherokee textile artist Kenny Glass. The main fabric has a syllabary print with a traditional ribbon strip, which is green to represent NSU.

Hoskin spoke next, commenting on solidarity and the momentous year tribal nations have had, as far as court rulings celebrating treaty rights, and that more Native peoples are leading in the country.

"The best days are ahead of us because of the young people," said Hoskin. "If our people had not stood in solidarity, I could not be here speaking as the chief of the Cherokee Nation because there would not have been a Cherokee Nation. We need to endure and survive, and put our community and our people ahead of ourselves."

Sara Barnett, director of the Center for Tribal Studies, recounted successes found by tribes in recent months, and said ancestors and their hard-fought battles should be honored. She invited the crowd to join the activities at Second Century Square and to "stand in solidarity" with Black Lives Matter at noon in Norris Park. Many walked across campus to make signs for the "Kneel at Noon," do chalk art, or sign up for the open mic opportunity.