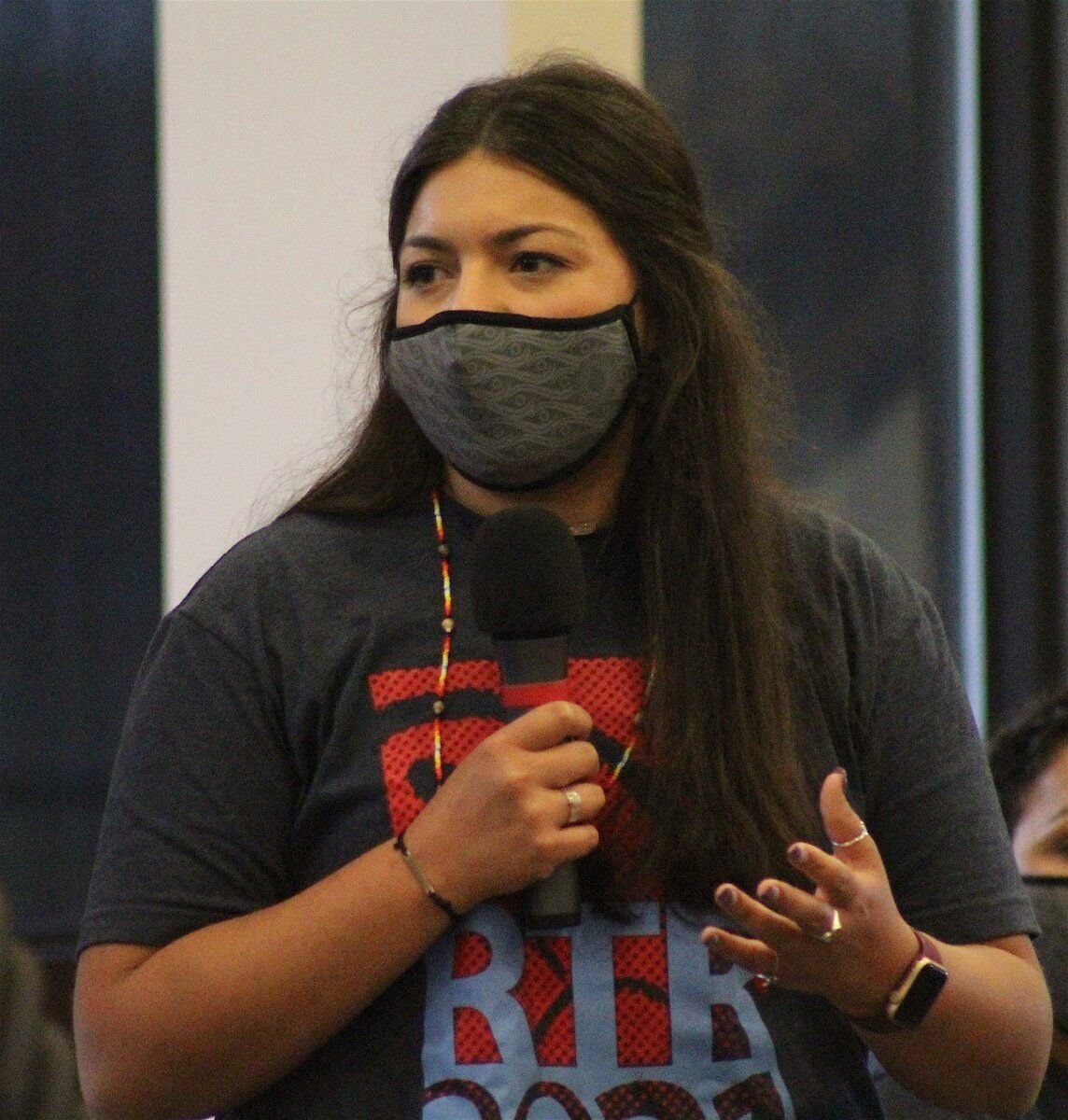 Whitney Roach is one of six Cherokee Nation cyclists taking part in the 2021 Remember the Removal Ride. 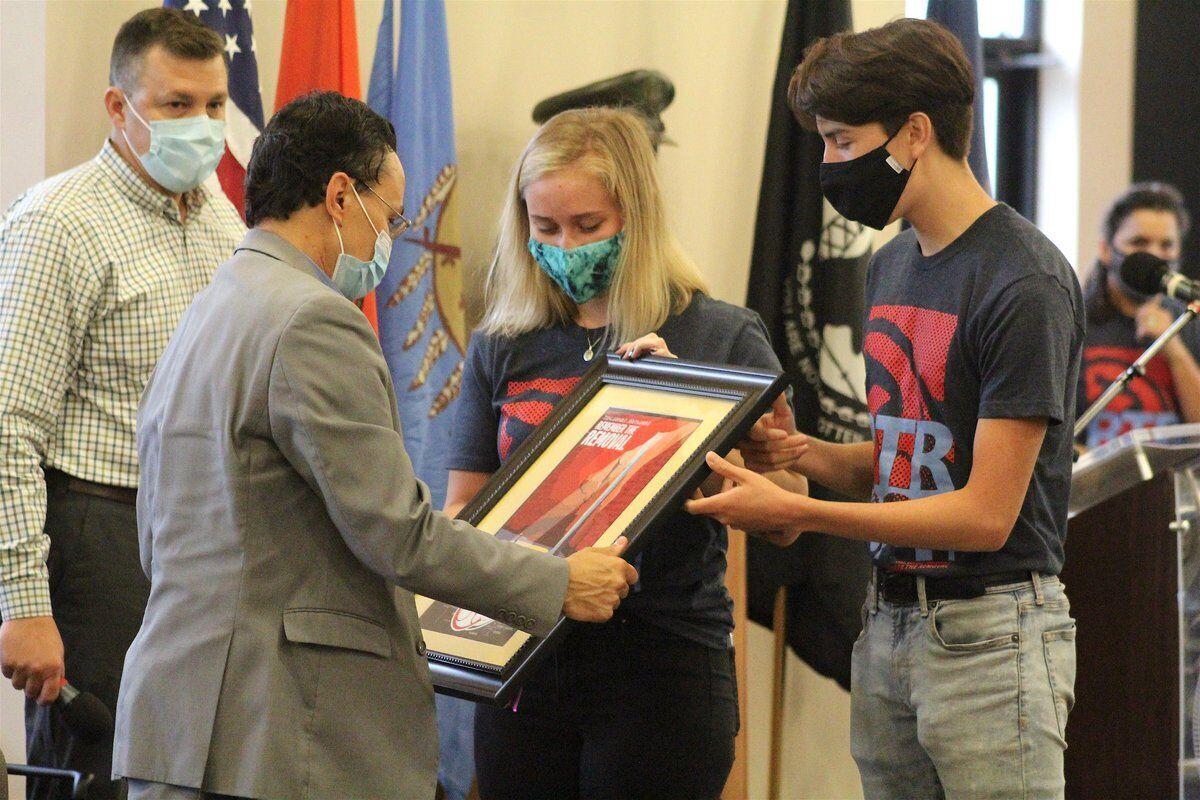 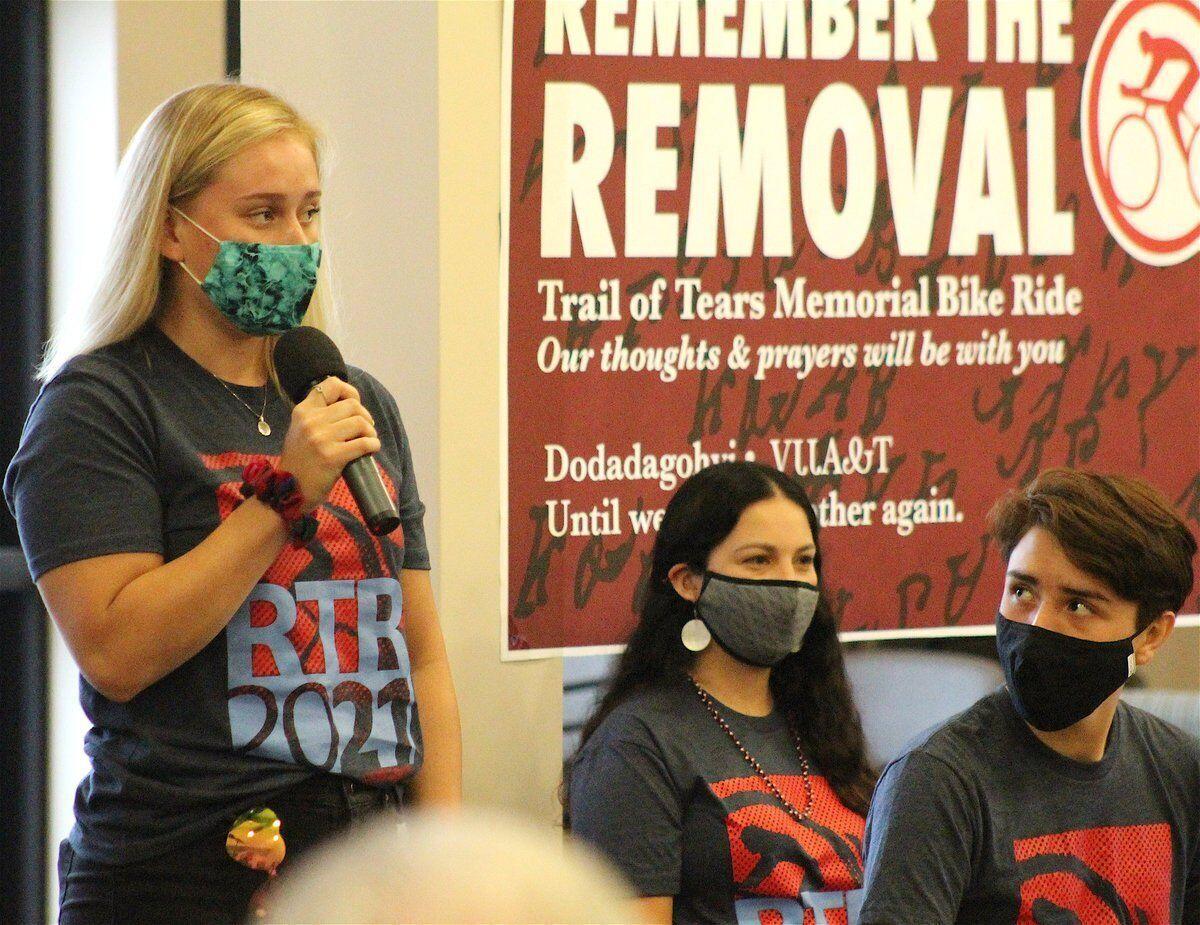 Remember the Removal Ride participants introduced themselves before they left for their 950-mile journey Wednesday. From left are: Kaylee Smith, Melanie Giang, Shace Duncan. 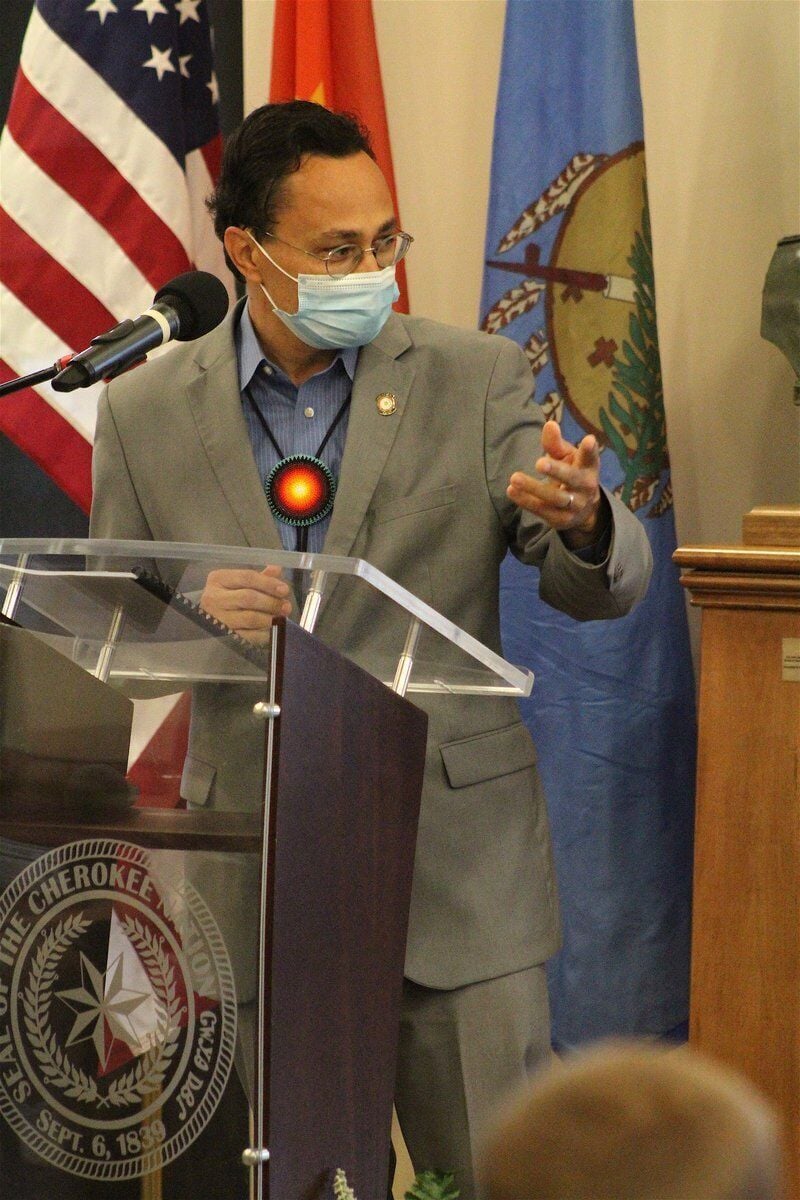 Whitney Roach is one of six Cherokee Nation cyclists taking part in the 2021 Remember the Removal Ride.

Remember the Removal Ride participants introduced themselves before they left for their 950-mile journey Wednesday. From left are: Kaylee Smith, Melanie Giang, Shace Duncan.

TAHLEQUAH, Oklahoma – Six bicyclists from the Cherokee Nation are about to embark on a 950-mile journey to retrace the Trail of Tears, as they left for New Echota, Georgia, on Wednesday, May 26.

In honor of their ancestors – recognizing the forced removal of the Cherokee people – the group will ride from Georgia to Tahlequah, Oklahoma, crossing Tennessee, Kentucky, Illinois, Missouri and Arkansas along the way. The cyclists will average around 60 miles a day on their journey, during which they will visit several Cherokee gravesite and historic landmarks.

Principal Chief Chuck Hoskin Jr. said there will be times on the Remember the Removal Bike Ride that the cyclists might feel the odds are stacked against them. He reminded them that the 16,000 people forced to walk the 950 miles to Indian Territory in 1838 and 1839 defied those odds.

“Split apart as we were after removal, those who predicted our demise surely believed the odds were in their favor,” Hoskin said. “Somehow, someway – through faith, through grit and determination – we survived. We rebuilt right here after that long journey. The odds were stacked against us, but once again, we overcame the odds.”

It takes more than a little training to complete the journey. The RTR cyclists have been preparing physically and mentally, since they’ll face tough conditions and rough terrain. One segment of the ride will require them to traverse the Cumberland Gap, a portion of the trail known for testing cyclists’ endurance and mental fortitude.

Destiny Matthews, a former RTR participant, told the riders it will be an emotional experience, but together, they’ll make it to the top.

“Although it was one of the most physically tough days, it was also one of the best days on the ride, because we saw all of the training, all of the hard work and dedication we had put in pay off that day,” she said. “We were able to work together as a team and overcome all of those doubts we had, sitting at the bottom of that mountain.”

The significance of the trip was not lost on the riders. Emotions were high, and a few tears were shed before their departure. RTR Cyclist Whitney Roach said she decided to sign up for the ride in honor her grandfather and ancestors.

“I’m very excited, nervous, scared,” Roach said. “I just know my team is going to be behind me to keep me going. And we always have to remember why we’re doing this ride, what it’s for and who we’re representing – not only just our tribe and ourselves, but our ancestors.”

The cyclists had their family trees mapped out by a professional genealogist, providing insight into their ancestral past, as well as connecting any family links they might share. They’ll visit sites like Blythe Ferry in Tennessee on the westernmost edge of the old Cherokee Nation, and Mantle Rock in Kentucky, where during the harsh winter of 1838-1839, Cherokees spent several weeks in the frigid winter weather, waiting for the Ohio River to thaw and become passable.

They’ll also be joined by three cyclists from the Eastern Band of Cherokee Indians in North Carolina. However, the team doesn’t have the same number of riders this year after the COVID-19 pandemic forced them to cancel last year’s ride.

“It was really upsetting for the rest of us, because we wanted to start and finish this thing together,” said Roach. “But things happen. We always have to deal with it. It’s been a really tough year for a lot of people, including our team, but we’re just so glad we got the opportunity to do it, and we’re ready to take it on.”

The journey is emotional for many. When riders return each year, it’s common to hear about days when the team had disagreements or didn’t get along. But the stories always end with reconciliation.

And Hoskin said if the tribal citizens agreed on everything, they wouldn’t be Cherokee.

“You might actually have an occasion to quarrel from time to time, but you’re not going to let that get the best of you, because you know you come from good stock,” he said. “You know that you have a mission. You know that on this mission, you carry on your back the stories, the spirit of your ancestors, and you also carry each and everyone of us with you.”